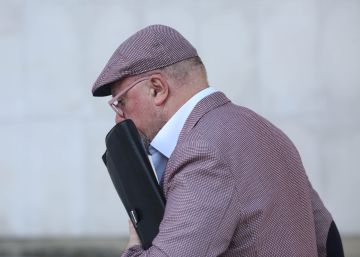 The judge of the National Court Manuel García-Castellón, instructor of the caso Villarejo, has summoned to declare for the next 4 and 5 of July as imputed to eight directors of BBVA accused of active bribery and disclosure of secrets in a separate piece of the Villarejo case, as they have confirmed to EL PAÍS judicial sources. Among those investigated is the former delegate Ángel Cano (he held the position between 2009 and 2015); Julio Corrochano, who was the head of security at BBVA during the Francisco González phase at the head of the bank; and the current head of security, Inés Díaz Ochagavía, who before taking the reins of this department was the number two of Corrochano.

Corrochano, who before being the maximum person in charge of the security of the entity was chief of Police of Madrid and general commissioner of Judicial Police, was the one in charge to contract presumably to the retired commissar Jose Manuel Villarejo so that he could carry out various works for BBVA, according to have revealed several recordings incorporated to the cause. The total amount supposedly delivered to Cenyt, the retired police company, is estimated at more than 10 million between 2004 and 2018. Among those works, it is investigated whether the services of Villarejo served to spy on businessmen, politicians and journalists by clicking on their phones.

Eight managers and a lawyer

The magistrate, in addition to Cano, Corrochano and Diaz, has also cited to declare as defendants in the separate piece number 9 of the summary – which remains secret and in which the alleged irregularities of the work of the commissioner now imprisoned and the BBVA- to Ignacio Pérez Caballero Martínez, of BBVA Seguros; Javier Malagón Navas, general controller of the bank and responsible for the expenses; Antonio J. Béjar González, who was in the real estate division of the bank; Ricardo Gómez Barrero, director of accounting and relationship with supervisors; and Nazario Campo Campuzano, part of the bank's security team.

In addition, the judge imputes and calls to declare the lawyer Rafael Redondo, partner of Villarejo. On July 10 García-Castellón will travel with two anti-corruption prosecutors to the prison of Estremera (Madrid), where Villarejo is being held, to question the policeman for his work for the bank, as confirmed by the commissioner's lawyer.

Various information published in recent months have indicated that the bank allegedly hired Villarejo between December 2004 and February 2005. to sabotage the financial operation of Sacyr that threatened to wrest control of BBVA from Francisco González. Only for those jobs, the commissioner, who was then active, charged more than half a million euros. Among the tasks he carried out was the supposed espionage of the communications of the main protagonists of that episode: the president of Sacyr, Luis del Rivero; his advisor, Juan Abelló; and the head of the Economic Office of José Luis Rodríguez Zapatero, Miguel Sebastián, as well as various companies and journalists. Finally, the purchase of the BBVA did not occur.

The commissioner presumed in his reports that during those three months he came to monitor 15,000 telephone calls from people he considered to be integrated into the Hostile Group, That was how Villarejo referred in these documents to the participants in some way in the maneuver to take control of BBVA. During that time, the contact within the police entity was allegedly Corrochano, with which he had coincided during the period in which the latter had been high command of the National Police. In a conversation in January 2005, the alleged Corrochano is allegedly explained to Villarejo by demands of Francisco González: "My president does not read the conclusions, you have to tell him pim, pim, pim and pim and take him for an ass".

More than a year of research

The BBVA opened uinternal investigation to determine if illegal practices were carried out, like the supposed hiring on the part of the ex-president Francisco González, to the ex-commissioner José Manuel Villarejo, to spy on businessmen, politicians and journalists by clicking on their phones. The search is still not closed and now the people in charge of the internal investigations are a hundred specialists in searching for murky subjects (investigation forensic) of the firm PwC, together with lawyers from the offices of Uría and de Garrigues.

In parallel, the National Court and the Anticorruption Prosecutor's Office have opened investigations. The Court has admitted the appearance and complaints of some of the allegedly spied on, such as former Minister Miguel Sebastián (at the time of listening to the head of the Economic Office of the Prime Minister of Zapatero); the former vice president of the National Securities Market Commission (CNMV), Carlos Arenillas; Luis del Rivero, former president of Sacyr, the former director of this company, Vicente Benedito and the former vice president of BBVA, José Domingo Ampuero.

May 24, 2018 The website Público brings to light invoices that reflected payments of 242,000 euros from BBVA to a company of former commissioner José Manuel Villarejo Pérez to uncover dark plots of Luis Pineda, president of Ausbanc, now accused of extorting the bank.

September 2018. Gonzalez announces by surprise that he is moving forward to December 31.

January 9, 2019. The website Moncloa.com and El Confidencial publish that BBVA ordered 4,000 phone calls to businessmen, politicians and journalists to defend against Sacyr's attempt to enter the bank in 2004. Alleged recordings of the former BBVA security chief talking to Villarejo about the pressure from González to obtain data.

January 15. The National Court opens a secret piece about Villarejo and BBVA.

January 24 The ECB urges BBVA to accelerate the closure of the investigation.

February 1st. Torres promises a rigorous investigation and affirms that he believes that Gonzalez did not know anything about Villarejo.