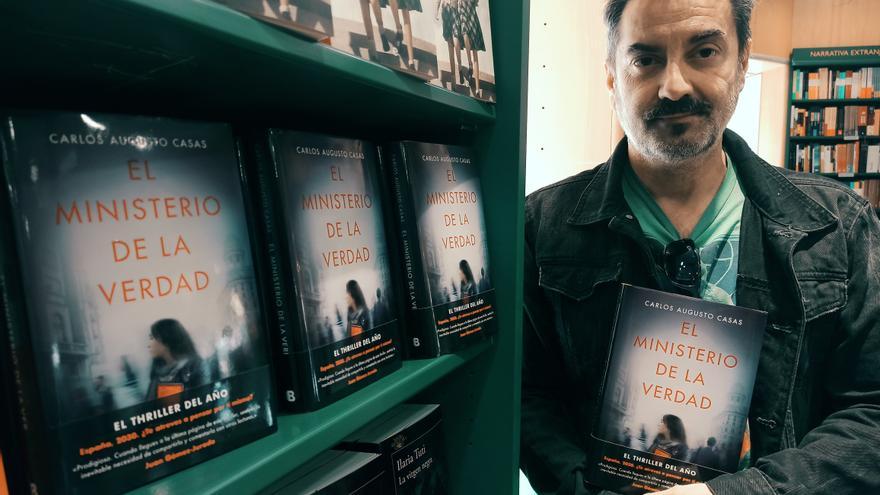 Madrid, May 26 (EFE) .- The writer and journalist Carlos Augusto Casas believes that the conditions are being set so that people are not interested in the truth and prefer to be entertained rather than informed, a situation that leads to the extreme in a “thriller “set in 2030 in Madrid.

“The Ministry of Truth”, edited by Ediciones B, is the title of this novel which, the author explains in an interview with Efe, “they say is a dystopia” but which he believes is quite true.

“It takes place in 2030, but more so that no one was tempted to relate what I have to a political party,” explains this writer, who makes a tribute to George Orwell’s “1984” in his novel.

Casas portrays in his novel a society marked by class differences, where almost everyone accepts without opposition the loss of freedoms and prohibitions. But Julia Romero, a young journalist, refuses to accept the official version that her father, a reporter who suddenly left the profession years ago, has committed suicide.

Her investigation will lead her to the almighty Ministry of Truth, the body responsible for controlling and manipulating the information that reaches citizens.

A society in which entertainment dominates everything, something that he believes is already beginning to happen today.

According to Casas, “access to information is easier than ever but it is also more difficult than ever to know the truth. And this is generating a satiety in citizens, it is so complicated that they directly refuse to be informed and indulge in entertainment.”

“More than in an information society, today we live in an entertainment society, people prefer to be entertained to be informed because it is becoming more and more difficult,” says Carlos Augusto Casas.

According to this writer and journalist, with some exceptions, the media have indulged audiences and sales and have “deserted the obligation to report,” something to which job insecurity contributes.

In his novel, the domain of entertainment has infantilized the society that accepts orders without questioning anything, and his characters walk and live absorbed in their mobile phones without perceiving the reality that surrounds them.

Unlike Orwell’s totalitarian society, in “The Ministry of Truth” it is the citizens themselves who censor themselves, social networks are the ones that reject and insult those who go beyond what the majority thinks, explains the author .

It is the “social burial of critical thinking”: “Anyone who strays from the established line is vilified. And if there is no critical thinking or dissent, people are more docile,” he warns.

It will be the readers who decide, says the author, if his novel is a dystopia or is too close to reality.