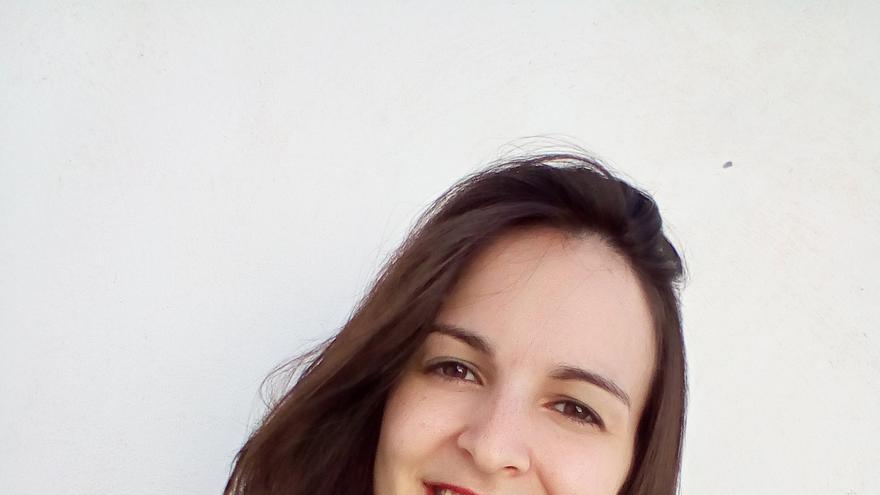 Casandra González, member of the Tertulia y Arte team, a digital space that aims to publicize the artistic and literary work that takes place in the Canary Islands, ensures that Nanino Diaz Cutillas left a mark that little is said about and perhaps it is for being less or not known at all: his poetic legacy. First and early flowers of a rose bush, the adolescent poems by Cutillas published in 1954, inspires the conference that Graduated in Spanish Language and Hispanic Literatures and Master in Audiovisual and Literary Culture, gave this Wednesday, within the framework of the VIII Campus of Ethnography and Folklore that takes place on the occasion of the XXVI edition of the International Folklore Festival of Ingenio.

For the researcher whose studies deal with oral improvisation in verse and the 10th spinel, assures that the poetic work of the popular journalist, “despite its apparent simplicity, his poetry distills the inner world that beat in Nanino. His collection of poems was published in 1954, when he was seventeen years old, although the poems were written up to four years earlier, when he was barely thirteen years old. Recurring symbols and images encompass most of his poems. The latter are very sensitive and visual and the game he plays with language is wonderful despite his young years, “says González, who has collaborated in various events organized by the Ochosyllabic Canary Islands Verseadores Association and by the Canary Foundation Nanino Díaz Cutillas.

“Nanino’s figure always stands out for his journalistic facet in the different media and for his career in the program Stall, but he was and is much more. The more we think we know about something or someone, the more we really do not know it “, adds who has investigated the poetic world of Díaz Cutillas and is of the opinion that his literary production would deserve a compilation for editing,” since it constitutes a source rich of knowledge. It is part of his legacy and of our tangible and intangible heritage. It should not be allowed to be lost or forgotten, ”he details.

The remembered and beloved presenter “continues to be a popular and emblematic character (and I hope he will continue to be that way in future generations) due to what he meant for Canarian popular culture. He knew how to highlight the island’s identity with humility and naturalness and took care to deepen and rescue the roots of a people that was unknown (and that continues to be unknown). In addition, it allowed the rich folklore and traditions that beat in each of the islands and who gave them life and voice to be known. He never wanted to be the protagonist. He knew very well who this role belonged to: the people. In addition, it did not establish preferences or priorities regarding the guests who participated in the program. Stall. Both Jorge Cafrune or María Isabel Torón and Antoñita had a place in it The Cuban or Valentina Hernández from Sabinosa, for example ”.

The literary and poetic production of Díaz Cutillas is not extensive. “In fact, today there is a short bibliography, in addition to the journalistic repertoire, by Nanino Díaz Cutillas, which is also exhibited at the Foundation that manages the Cabildo of Gran Canaria. Here, as a curiosity, a recipe book written by Nanino is also exhibited and preserved. In terms of dissemination and knowledge, they stand out Songs of the island, I Conference of Studies. Canary-America, Cuba and the Canary Islands: musical relations, Easter Ranch from Teguise and Biography of Don José María Gil: poems, sorondongos and narrations; and as a literary theme, First and early flowers of a rose bush, his first and only literary work.

Casandra González is currently working together with the professor of the ULPGC, Yeray Rodríguez, in a study on the verse tradition. The researcher estimates that the new generations are interested in delving into the figure of Cutillas. “I have been able to verify this first-hand in the youth themselves who have actively participated in the Foundation as a result of the concerts that have taken place within it. Nanino Díaz Cutillas is still present in the collective memory. I emphasize the words that Juan Antonio Martínez, Nanino’s friend and former director of the program, once said Stall: “I would like Nanino to be the memory of the future.” And I believe that this has been achieved, although there is still a long way to go so that his name and his legacy continue to beat and continue to be known by future generations. One does not die definitively as long as there is someone who keeps the memory alive ”, he concludes.