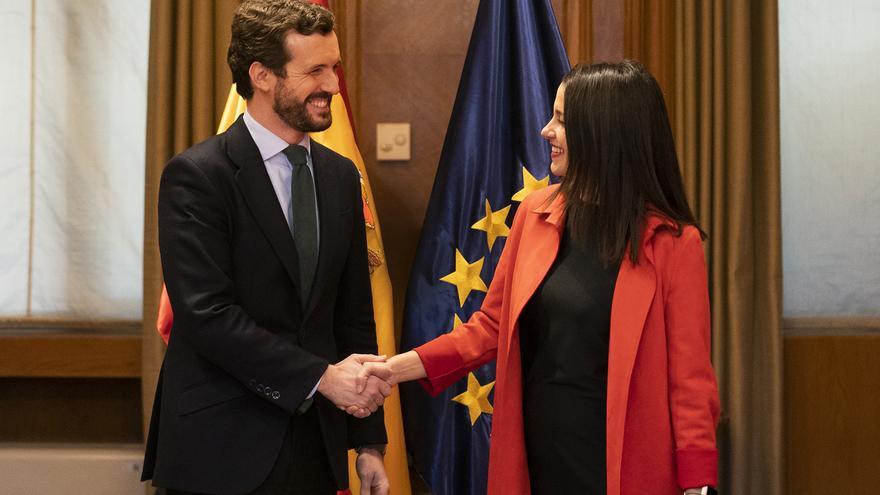 The longed for “reconstruction” of the center right that the leader of the Popular Party, Pablo Casado, set himself as one of his great objectives when he was elected president, in 2018, it is watery. This merger of PP and Ciudadanos – with an eye to also integrating Vox in the future – into a single brand that came to be called Spain Suma, is now being hampered at the gates of the Catalan elections for which the popular ones agreed concur in coalition with the party of Inés Arrimadas.

He failure of the single list presented by the two parties in Euskadi –Which lost three of the nine seats that the PP had won alone, in 2016–, and the turn of the direction of Citizens towards positions prone to agreement with the Government, they move away the possibility of a joint list for the elections to which the president of the Catalan Generalitat, Quim Torra, still does not set a date, but which is expected for next autumn.

In June, Arrimadas put an end to the sanitary cordon that the three rights had imposed on the Executive of Pedro Sánchez. Ciudadanos, which governs in coalition with the PP in the Community of Madrid, Andalusia, Murcia and Castilla y León, agreed with PSOE and United We Can to support the last two extensions of the state of alarm, as well as the decree of new normality, which finally also supported the PP. In addition, the Arrimadas party agreed with the Government its support for three of the four opinions of the Commission for Reconstruction. To all this they join the bad relations between both parties in their joint government in Madrid, which have been evidenced during the management of the pandemic.

In this scenario, popular leaders, among whom are the main barons of the party such as the president of the Xunta de Galicia, Alberto Núñez Feijóo or the Andalusian, Juan Manuel Moreno Bonilla, have already shown themselves against reissuing the coalition with Ciudadanos en Catalunya. The leader of the Catalan PP, Alejandro Fernández, asked to discard that idea during the National Executive Committee of the party that was held on July 15, just three days after the PP + Cs hit in the Basque elections, and received the support of a large part of the territorial leaders.

Fernández, leader of the Catalan PP: “The scenario has changed”

Last Monday, Fernández acknowledged that his party continues to “study” the potential of a coalition with Ciudadanos, despite the fact that he rejected the proposal launched by the Arrimadas party, which proposes adding the PSC to this hypothetical alliance with the idea of ​​forming a constitutionalist bloc against the nationalist and independence forces. In a interview in Catalunya Ràdio, the leader of the Catalan PP recognized, in any case, that he is analyzing whether the coalition with Citizens is still feasible given the “strategic turn” of the oranges “in support of the PSOE Government”, which in his opinion “has changed the scenario “.

“When the center-right unites around the Popular Party it is capable of defeating the sum of socialism, populism and nationalism,” insisted Casado on July 15 before the main leaders of the party, implying that his bet was still valid. for concurring in coalition with Ciudadanos to the Catalan elections. “The great pending political task is the most difficult, which is not to break to keep a piece, but to rebuild what has been broken. It is to create a great current of national opinion willing to clearly resolve the dilemmas that once again is in front of him, “he remarked.

In reality, Casado tried to consummate in the Spain Suma coalition with Ciudadanos, and also with Vox, before the general elections of 2019, but the rejection of those two parties that fight with the PP by the same electorate postponed the plans of the leader of the popular, who seeks that alliance inspired by the thesis of his political godfather, the former president of the Government José María Aznar.

its undisguised goal since he lost the generals The 10N with the second worst result in the history of the PP – the one achieved on 28A improved by 23 seats, reaching 89 – is to consolidate its role as leader of the opposition and reinforce the position of its party to reposition it as the historical force Hegemonic of conservatism that was for years, at least until the current division of the right into three – PP, Vox and Ciudadanos.

The breakdown of the Columbus photo

During the National Congress that made him president, Casado assumed “the responsibility of rebuilding the center right and recovering the thousands of lost votes” towards the Albert Rivera and Santiago Abascal formations. The leader of the PP managed to stage a first photo of the union of the three rights in the controversial concentration of Columbus which took place in February 2019 to demand an electoral advance from the President of the Government, Pedro Sánchez.

That photo is now broken by the different strategies of the three rights. Arrimadas is inclined to agree with the PSOE and Vox has just dealt a hard blow to Casado’s strategy with the motion of censure that he will present against the Government in September, and to which the PP has already said no.

The popular ones also considered the first steps towards Spain to be added together with the agreements reached with Ciudadanos and Vox last summer in different regional governments – Andalusia, Community of Madrid and the Region of Murcia – and municipalities – Madrid or Zaragoza. Although the PP does not renounce to merge Vox into its ranks in the future – hence the winks and the assumption of part of the ideas and forms of the extreme right -, leaders consulted by eldiario.es recognize that the integration of the extreme Right now is complicated, since it is in a moment of electoral rise as the third force in Congress.

Take advantage of the decomposition of Citizens

The “reunification” also happened to take advantage of the decomposition of Citizens to consummate a fusion of the formation that is said “liberal” in the PP. It is a process that the popular ranks set for the medium term but that in any case had to take place during the XIV Legislature that has just started and that the conservatives venture “short” due to the tight majority that Sánchez has in Congress and the differences with some of his partners, above all the nationalists.

After the formation of the autonomous governments of coalition between popular and Citizens, the elections to the Basque Parliament on July 12 were the last great test at the polls for Casado’s great obsession to merge to PP and Citizens within the framework of the “reunification” of the center right that was split in three with the fall of the Government of Mariano Rajoy after the 2018 motion of no confidence.

The experiment resulted in the creation of the PP + Cs coalition, denomination of the joint list in which the two parties participated in the Basque elections and with which they also planned to appear in Catalonia. The resounding failure in that appointment with the polls has meant, however, a foreseeable change of plans.