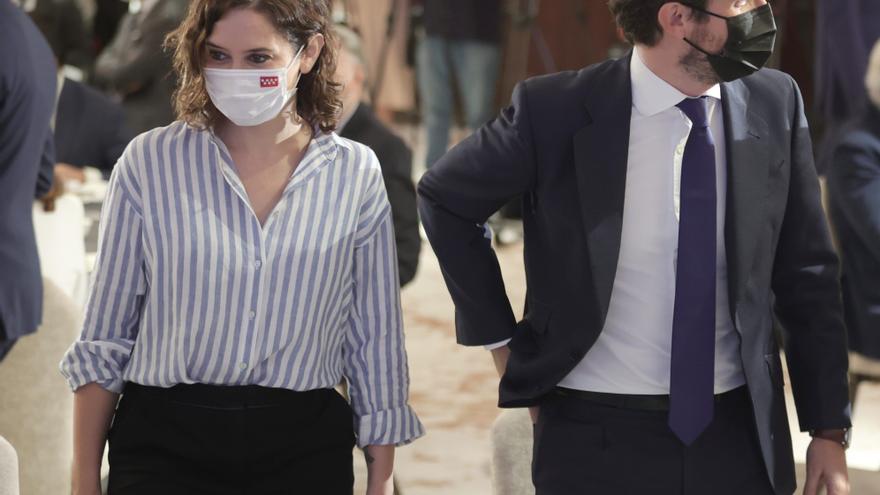 Pablo Casado announced last June that the PP would receive the fall with a political convention that would serve to relaunch its project before the electoral cycle that is beginning to be glimpsed on the calendar. The conclave was to serve to finish reformulating the turn in the party’s strategy and prepare the assault on the Moncloa Palace. The national leadership of the PP was focused on its organization when a conflict arose where it was least expected. Isabel Díaz Ayuso could be impatient to control Madrid, or the certainty that Casado would shy away from a conflict a few weeks before the convention with whom he has become one of the referents of the right trumpist. Casado accepted the challenge. He commanded his own to fight. And he has won it.

Casado will have peace in the political convention in which he wants to recover the idea of ​​a hegemonic PP in the center-right and with the ability to attract certain progressive sectors. An intention that has remained at that. The PP has recovered for the event two ex-militants of the party who left it to try other political adventures, Alejo Vidal-Quadras and Juan Carlos Girauta. And to the former general secretary of the CCOO, José María Fidalgo, who for years has not had the slightest ancestry among his former union colleagues.

That’s all the opening that Casado can sell. And at the international level, the result is no better. Even with more presence of European leaders than in previous similar appointments, such as the convention organized by Mariano Rajoy in 2018 just two months before being dismissed by Congress, the current leader of the PP will only have the presence of a head of Government: the Austrian Sebastian Kurz, who came to the Chancellery hand in hand with the extreme right. The rest of the foreign representation represents the past more than the present or the future, perhaps more because of the situation of the European PP than because of Casado himself. The party, which in 2019 took control of the main community institutions, today is experiencing a setback throughout the continent, except in those in the East, whose governments are in direct confrontation with EU rules.

Neither will the judicial associations nor the president of the CEOE, Antonio Garamendi, all invited by Casado, but who have declined to support the alleged relaunch of the alternative to Pedro Sánchez, will attend. The businessmen will be represented by two of their vice presidents and by former minister Fátima Báñez, today president of their foundation.

However, at the national headquarters of the PP the spirits are through the roof. The machinery of Genoa has been busy for weeks to organize the convention, which will only last a week. First, with a tour of several cities where different sectoral events will be held, to end the weekend of October 2 and 3 in Valencia. On Sunday, Casado wants to fill the city’s bullring, a totemic for the match since the great triumphs of José María Aznar.

But a dark cloud settled for a few weeks over the headquarters (for sale) located at number 13 of Madrid’s Genova street. And a storm was threatening, precisely in the place where Casado least expected it: in Madrid and by the hand of Isabel Díaz Ayuso.

The Madrid president disregarded the decision adopted in July by the National Board of Directors of the PP, the main body between congresses, which transferred the renewal of the autonomous directions to the first semester of 2022 in the single-province communities. At the end of August, after his publicized holidays in Ibiza, Ayuso returned to work launching his candidacy to preside over the PP of Madrid when the process was not called. In addition, she proposed her own calendar for the congress to be held “soon.”

The regional president, very empowered after her victory in the elections on May 4, thought that Casado would not fight, that he would give in not to open an internal front just before the national convention and with whom, they argue in the offices of the Puerta del Sol, which houses the Government of Madrid, represents more than anyone the essences of the PP that led Casado to the presidency of the party. Ayuso counted on his part with two names of weight in the match: José María Aznar and Esperanza Aguirre.

The first, more restrained, defended Ayuso’s state strategy, who has constructed the story that she, and only she, confronts the “social-communist” government of Pedro Sánchez. A framework to which they contributed significantly from Moncloa with the intention of ignoring Casado. If the current leader of the PP does not manage to win the elections and govern by the third time, Ayuso wants to be in the front line when the hare jumps. Or before, if the convoluted judicial panorama that the party faces takes it ahead without even reaching the polls.

Much more forceful was Esperanza Aguirre. “Chiquilicuatres” was the qualifier dedicated to the Genoa bosses most famous of that interview in The world which included messages to the mayor of Madrid, José Luis Martínez Almeida. Genoa responded a day later, through the mouth of his number two, Teodoro García Egea, who came out with everything: “What destroyed the PP in Madrid was corruption”.

All three are children of the same PP, that of Aguirre and Aznar. There is no ideological dispute, only the classic fight for control of the party in Madrid that Aguirre and Gallardón have already carried out before, for example, as a prelude to the assault on the national leadership.

The row has occupied the front pages of newspapers and radio and television hours. Ayuso even threatened to plant Casado at the national convention, claiming a nine-day trip to the United States in which he would have time, for example, to attend the premiere of Alejandro Sanz’s star on the Hollywood Walk of Fame. The political and media right attended, stunned, a fight that has had an immediate transfer to the polls. If Casado’s PP has risen in the polls uninterruptedly in 2021, the public struggle with Ayuso stopped the rise in its tracks and reversed the evolution.

And the silence came. Married has imposed criteria. Aznar has stopped praising Ayuso and will accompany the president of his party in the act scheduled for Thursday in Seville. Rajoy will do it on Monday, in Santiago. And Ayuso will not be in Madrid on Wednesday to talk about “liberal feminism.” Not even with a recorded video.

In Ayuso’s environment they do not believe that the Madrid president has lost anything since, they say, the leadership of the PP in Madrid has it assured, informs Fatima Caballero. In memory, the imposition from Genoa for Toni Cantó to be part of the 4M list. However, the same sources insist that the regional congress should be held as soon as possible. In Puerta del Sol they are aware that, today, Ayuso has no rival in the region, but Genoa aspires to replicate Aznar’s model, during whose mandate institutional and organic power was distributed among three people.

On Friday, hours before leaving for his US tour, which he had to cut back to get to the PP convention on time, Ayuso posted a photo with Casado and Almeida on Instagram. With good vibes, and her in the middle.

But Casado does see himself as the winner of the first real internal pulse he has had since he took over the leadership of the party. The proof is that in Genoa the absence of Ayuso in the act of Madrid does not worry because his place will be occupied by “someone equivalent”, in the words of a state leader of the PP. A whole declaration of intentions about what is the role that they reserve for the Madrid leader, who struggles to catch up with his commander. Maybe he’ll do it in a future second round.