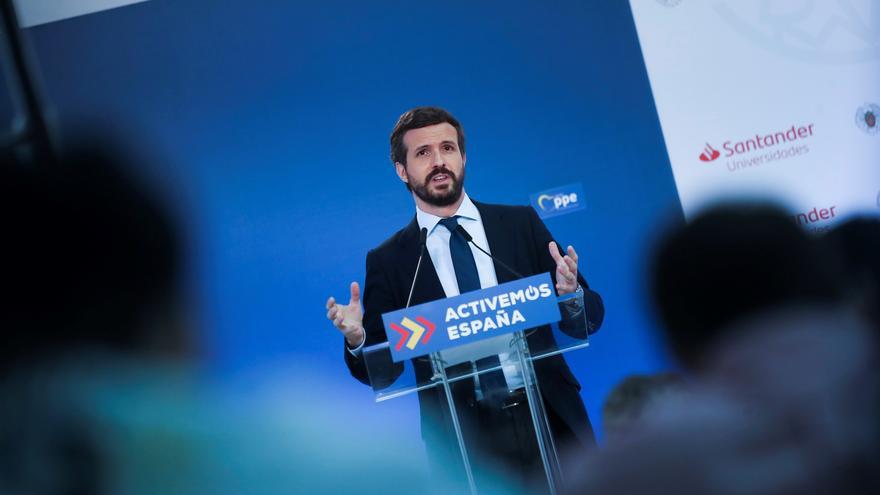 The president of the Popular Party, Pablo Casado, has taken advantage of this Thursday his intervention in the summer course ‘Press and Power’ organized by the San Gabriel School in Aranda de Duero (Burgos) to lash out harshly against the informative treatment of the media communication. Visibly angry, Casado was denouncing the left to accuse the PP of having carried out cuts in Healthcare when he has made an entire allegation against the press.

“With this propaganda, everything does not matter the truth. It does not matter if you lie in a Parliament, as has happened with the Interior and the Civil Guard, Venezuela and Delcy or the Dina case,” said the PP leader. “Here people don’t care if they lie. Of course, if they have more means, more covers and more budgets, they win. Hey, you can’t do politics like that!” He complained during the colloquium of the aforementioned summer course.

Immediately afterwards, he added: “If the truth is irrelevant in the political debate, who wins? The one who best lies. It does not matter if they accuse us of twitching. If they have means, if they have covers and they have BOE, well nothing. tomorrow they will accuse us of arsonists and we will be. What responsibility do the media have to have, at least to demand the truth? ”

“I am not saying that they say that we do it right, nor that they do it badly, I do not have the slightest interest. Simply that it be said: ‘Hey, this is a lie’. ‘It is a lie that Mr. Casado has to do with any type of cut, the one that cut was Mr. Sánchez ‘;’ it is a lie that Mr. Casado has been negotiating against the Government of Spain in the European budget negotiation. His three colleagues from the PP are those who have signed it, “he denounced. Married.

“No one says that. Today what is read in the press is ‘Sánchez looked very proud’, ‘he was applauded’, ‘I do not know how many deputies there were’. Is there someone who is talking about the seven million Spaniards [en paro] or the numbers Cambridge has told you are pathetic? “he added.

At that time, Casado asked to take advantage of the summer period to make “a reflection as a country”. “This is not seen in the world. The other day I had an interview with the Deputy Minister of Health of the United Kingdom for wasap. Look for it!”, He asked the students who were listening to him in the room. “The interviewer cut him off with a cover of deaths in a hospital center. The interviewer said to him: ‘Hey, what are you laughing at? Can you tell me if it’s true, how so, so, so?’ (sic) And the vice minister, ‘don’t look, because we’ … ‘Don’t tell me what you are going to do!’ “Casado recounted, quoting the British interviewer again.

“You suffer when you watch the video! Fifteen questions,” he continued, to continue criticizing the Spanish press. “Here, nothing. Here they go out to say that there are 28,000 dead and if we ask for the number, we twitch. to say that it is great that those of the process say ‘boys, commit a crime if you do not like the laws’, and if I speak of Catalonia, it is that I twitch … “, he lamented.