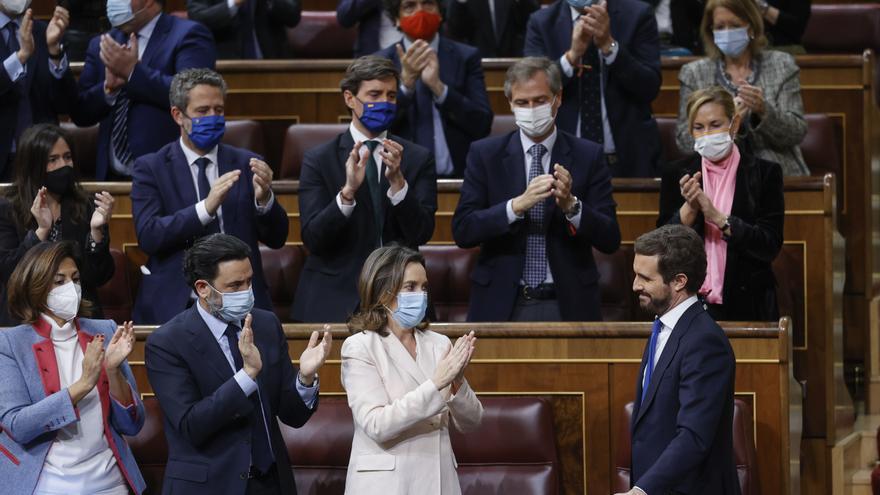 The PP entered at dawn from Wednesday to Thursday in unknown territory at least in the last 30 years. The president of the party, Pablo Casado, will cease to be so in just over a month. so what agreed in a long meeting with the barons, from which a succession bet came out: Alberto Núñez Feijóo. On April 3, except for another political earthquake, the relief will be formalized. The territorial leaders have intervened in the organization and they urge the Galician, which at the moment does not make the candidacy official. Until the extraordinary congress, the PP lives a kind of strange bicephaly, with Casado as president without troops, but with autonomy; no general secretary; without the ability to influence congress; and with a parliamentary group that must be reformulated immediately and whose spokesperson, Cuca Gamarra, will be promoted to general coordinator next Tuesday.

The first test of this strange situation, unprecedented in a party accustomed to forceful, vertical leadership and without unoccupied spaces, has come in the form of war in Europe. The Russian invasion of Ukraine occurred hours after the pact sealed between Casado and the barons (excluding Isabel Díaz Ayuso). Before ten in the morning, the still president of the party tweeted: "We strongly condemn this aggression and convey our solidarity with the Ukrainian people."

The message, the only one of the day (in any format) issued by Casado, came after an exchange of whatsapp with the President of the Government, Pedro Sánchez, as confirmed by the team of the President of the PP. Sánchez had done the same earlier in the week, according to the same sources. That is to say, Casado managed the rupture of his hard core and the loss of control of the parliamentary group with the details of the military offensive that Vladimir Putin had been preparing for a long time.

An exact minute later, it was the imminent general coordinator of the PP, Cuca Gamarra, who tweeted in a similar vein to Casado. Similar, but not exact. "We condemn the Russian attack on Ukraine and support the Government of Spain in a firm and forceful response with our EU and NATO allies," the message stated.

Gamarra is called to be designated number two of the PP in the National Board of Directors next Tuesday, which will officially convene the extraordinary congress in April. The position for the Rioja leader will be that of general coordinator, vacant since the times of Mariano Rajoy. On her day it was occupied by Fernando Maíllo and, on paper, he is below the secretary general. But the resignation of Teodoro García Egeawho will not be formally replaced until after the congress, raises his status.

From the environment of both they assure that there was communication between Casado and Gamarra about the conversation with Sánchez and the tweet. But with nuances. "What is always done has been done, the president sends a tweet about a national or international problem, and then those who want to on the same topic come out," they point out from Genoa.

In fact, after Casado's, more tweets arrived: Feijóo, an hour later; Ana Pastor, two; Juan Manuel Moreno, between the two. Similarity in the messages, but each one with a particular wording and with the focus on different elements.

Already in the afternoon, Cuca Gamarra offered a press conference in Congress to speak on behalf of "the parliamentary group" and express that his position "coincides with that of the president of the PP." Not to mention Married. In fact, he did not do so throughout the appearance. Nor when he asked "that the channel of communication between the Government and the parties allow any measure that is adopted to be agreed upon and agreed upon." Nor later, in the usual press release sent by the group's communication team to journalists.

Asked about the battle that the party has experienced, Gamarra said he did not want to go into that issue to focus on Ukraine, although he did point out that "internal decisions and agreements have been made unanimously" with the aim of recovering "from the crisis" that has "suffered". "We are not going to disappoint the voters, the militants or the Spaniards," she settled, to end the appearance.

Unresolved questions remained in the air, such as who is going to dialogue with the Government, and even with the House of the King, until the April congress. Or how the messages will be coordinated.

It is also unresolved who will reply to Pedro Sánchez in Congress. Casado's intervention last Wednesday, in which he did not consume all of his time and after which he left the Hemicycle to the astonishment of some, sounded like a parliamentary epitaph.

Next week there will be no control session, but the situation in Ukraine has prompted an urgent appearance by the President of the Government at his own request. Parliamentary sources confirm that, at the moment, it has not been decided who will go up to the rostrum to establish the position of the PP. In Genoa they are silent on this point.

These details are a symptom of the foreseeable confusion in a crisis situation that occurred after the alleged "espionage" was leaked to Ayuso's environment by City Council personnel related to Moncloa, which was an approach of municipal personnel to detectives to try to know more about the contract for which the brother of the regional president received payments.

But it can cause problems, especially after Casado has refused to resign this week, as several regional leaders have demanded, not only in private. the still president has relinquished control of the party. He no longer has springs to activate, since he verified between Monday and Tuesday that he had lost control over a good part of the territorial directorates of lower levels, provincial and municipal.

The count of soldiers that García Egea insisted on might have borne fruit and they would have managed to save a rebellion in a National Board of Directors that has more than 400 members. But politically it would have meant a confrontation even deeper than the one experienced in recent days.

Married was called to be a figurehead until April 3. And he still is, in fact. But meanwhile, he remains the president of the PP. Pedro Sánchez will continue to treat him as the leader of the opposition, at least formally. Organically handcuffed, with no sign of influencing the congress after angering the entire organization, even to his most faithfuldue to its resistance to relinquishing power, maintains a certain autonomy thanks to the pact reached in one of the most intense early mornings remembered in Genoa without being an election night.

In the end, Casado accepted his defeat. He promised to support Feijóo. He left in writing that he will not appear at the extraordinary congress. The PP that comes out of that conclave will not look like yours. But, until then, he is the president.