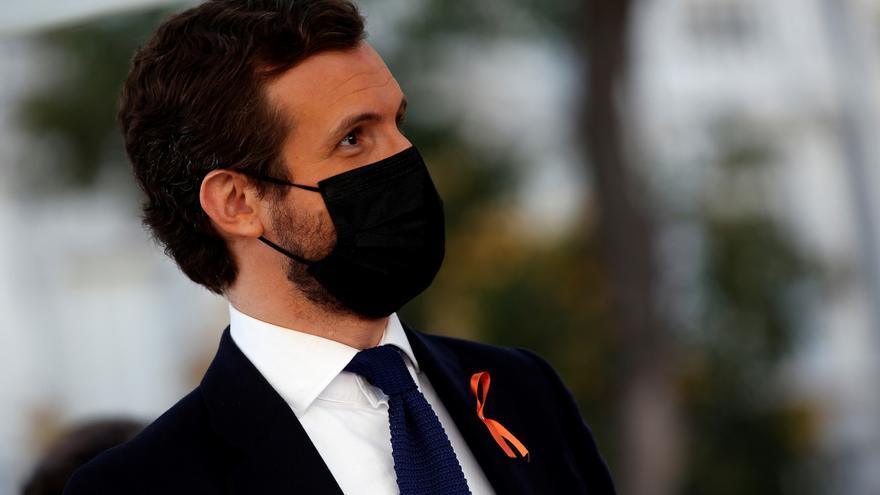 Immersed in his strategy to differentiate himself from Vox after months of coincidences in his speeches and after having reached different regional agreements, the leader of the Popular Party, Pablo Casado, attacked this Wednesday against the “denial” of sexist violence that characterizes the extreme right taking advantage of the celebration of 25N, day of the fight against gender violence.

“Of course there is gender violence and the measures [contra esta] they are compatible with the measures we take against other types of violence. There is violence against women just because they are. This scourge has a specific and terrifying component that must be addressed. Denialism is lethal, “Casado assured during an event in Madrid without directly mentioning Santiago Abascal’s party at any time.

The PP maintains agreements with Vox that the governments of Andalusia, the Community of Madrid or the Region of Murcia guarantee, places where precisely the extreme right has vetoed statements against sexist violence, considering that they “victimize” women and They “attack” men.

Casado, for his part, wanted to remember the 1,074 women murdered since the records of sexist violence began in 2003. He has also assured that the mistreatment of women is a scourge to which “we must not put hot cloths “. However, Casado has assured that these women “were murdered by men who were not men but animals” and that the violence is “perpetrated by cowards” or by “people without any kind of principle.”

“The only people responsible are the murderers, but our obligation as politicians is that these women denounce,” added the leader of the PP in an act presented by the party’s deputy secretary for Social Policy, Ana Pastor, and in which they have participated, among other women, the president of the Observatory against Domestic and Gender Violence, Ángeles Carmona, or the magistrate of the National Court María Tardón.

The president of the PP has also taken advantage of his intervention to charge United Podemos for not supporting the State Pact against Gender Violence approved in 2016 and has asked that “there are no extremist ideologies, on one side or the other,” alluding to the confederal group and the fact that the Churches party now manages the Ministry of Equality, headed by Irene Montero.

Casado has also linked sexist violence with irregular immigration due to the “exploitation of human beings” and has assured that the growing unemployment of women due to the pandemic makes them unprotected from their aggressors.