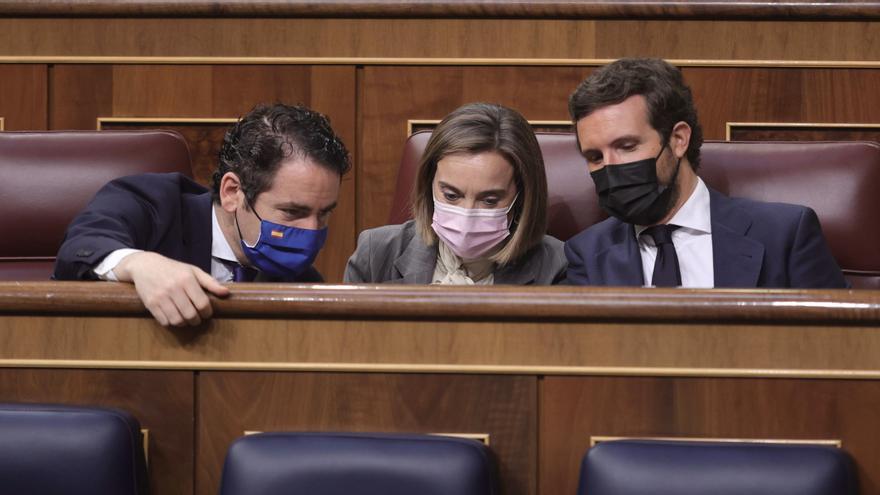 The beginning of the recovery that is being reflected in job growth and in the improved growth forecasts of all the institutions has not only failed to put an end to the permanent smear campaign of the Popular Party against the government's economic policy, but has also aggravated it. Pablo Casado's leadership has expressly asked all party officials to deny the rebound in the Spanish economy, urging them to speak in each of their public speeches that "Spain is experiencing a real social catastrophe today."

In its internal arguments, the slogans that Genoa 13 sends every day to all popular leaders to use in their respective appearances, the leadership of the popular demands to defend that the aforementioned "catastrophe" in which, in their opinion, the country finds itself it has arrived "as a consequence of the almost five million Spaniards who want and cannot work." Actually, according to the latest official data from the beginning of July, in Spain there are 3,614,339 unemployed and 447,800 people in ERTE. "We still have about 400,000 more people unemployed than in the time before the pandemic, and the youth, who suffer the highest unemployment in Europe, with figures exceeding 40%, are installed in discouragement and despair", Casado's team points out.

Another idea that Genoa 13 asks to repeat is that "the queues of hunger extend throughout the entire Spanish geography", a phrase that has become a classic of practically all of Casado's interventions in recent weeks. Along these lines, on Wednesday, the PP leader considered, before the National Board of Directors of his party -The highest decision-making body of the popular between congresses - that the Executive has caused "institutional and territorial devastation", as well as "economic, social and health ruin due to negligent management" during the pandemic.

The central argument that Casado's team insists on trying to be repeated by popular offices throughout Spain is that "the Government has become a toxic element and its economic policy responds to social engineering." "We must let the self-employed, SMEs and entrepreneurs do, invest, employ and, ultimately, make a country, who are the ones who create wealth, prosperity and raise the blind every day," say the slogans of the PP leadership.

Since his triumph in the primaries, just three years ago, one of the main pillars of Casado's opposition work has been to try to torpedo all the economic decisions of the Government with the historical premise always defended by the PP that the right manages better finances. That is the main reason why the leader of the popular has declared war on businessmen that in recent months have reached different agreements with the progressive Executive on labor or pensions. The PP does not forgive that the bosses, a sector it considered related, have "betrayed" the rights by agreeing with a Government of the PSOE and United We Can.

But mainly, as a result of the outbreak of the pandemic, Casado's main strategy has been try to prevent the funds from reaching Spain in Brussels Europeans destined to alleviate the consequences of the health emergency. In September, when the European Union was debating these funds the 'popular' leader met with the ambassadors in Madrid of all the European partners to show their distrust in the Executive to manage those millions of the recovery fund.

In the middle of the negotiation process of the regulation for the distribution of funds, when it was at stake what conditionalities were going to finish being demanded, Spain led the data of contagions in the EU - it was known as the second wave of COVID - and it was one Of the countries most affected by the economic collapse of the pandemic –in terms of unemployment and falling GDP–, the leader of the PP stirred up the specter of distrust towards the Government among the 27 countries of the Union. Casado then claimed an authority above the ministers to manage the funds, fueling those suspicions against the Executive, which he still maintains today.

Also then, the head of the PP delegation in the European Parliament, former minister Dolors Montserrat, sent a report on the letterhead of the popular Europeans together with a signed letter in his own handwriting to the Commissioner of Justice, the Belgian Didier Reynders, in which he questioned the rule of law in Spain and accused the Government of wanting to "cover up figures that place Spain among the countries with the highest number of deaths in relative terms."

In that 13-page report, titled Evaluation of the measures applied in Spain during the State of Alarm, Montserrat criticized the state of alarm decreed to face the pandemic and that the PP stopped supporting more than a year ago. "This document expresses a concern based on the specific case of the action of the Spanish Government. The persistence of constitutional instruments of exception beyond what is reasonable, the exercise of the so-called 'sole command' through low-ranking administrative rules that, without However, they also suppose a serious intrusion in the sphere of the economic and civil rights of the citizens, as well as the deterioration of the capacity of the Parliament as an instance of democratic control are some of the aspects that are analyzed below ", pointed out the text.

Casado's economic alternative to the Government's plans, reflected in his arguments, is based mainly on the practical elimination of taxation and the reduction of the State to the maximum. The popular ones defend a "competitiveness plan" that is based on five key pillars: "lower taxes, labor flexibility, reduction of bureaucracy, improvement in training and legal certainty." "It is the only way to get out of the crisis and lift the country. We have done it when we have governed and we will do it again when we govern," Genoa 13 sentence.