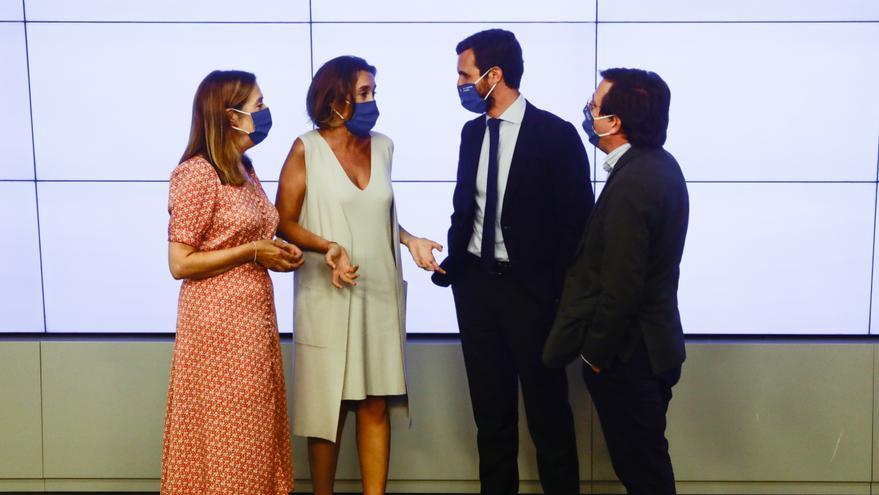 The turn from the center to the Popular Party for the new political course will remain only in the forms. The dismissal of Cayetana Álvarez de Toledo and the rise of more moderate profiles in the party opened the door to all kinds of speculation about a new shift to the moderation of Pablo Casado. The parliamentary exporter herself suggested on the day of her abrupt departure that her dismissal was linked to an approach of the PP to the Government of Pedro Sánchez. Álvarez de Toledo cited the negotiation to renew the General Council of the Judicial Power, whose mandate has been exhausted for many months, and even the talks on the Budgets that will start after returning from vacation.

The president of the popular It has taken 48 hours to clear any hint of doubt about its contribution to governance, after the National Board of Directors held this Thursday electronically. Before his own, he ruled out reaching agreements with the Executive. The same position held up to now and the one that led the PP to vote even against the continuation of the state of alarm in recent weeks. There will be a change of faces, yes, and there are the mayor of Madrid, José Luis Martínez-Almeida, turned into national spokesman, and Cuca Gamarra as number one in Congress, but the philosophy will be the same: no water for the Government of Pedro Sánchez. “We cannot be part of the governance of Pedro Sánchez because we are his alternative,” he said before the gaze of all the barons by videoconference, including the recently dismissed Cayetana Álvarez de Toledo, who telematically attended the meeting.

Casado thus establishes limits to the new stage, in which he asks for temperance in the ways but maintains the same policy of alliances. With the course that has set his own, the leader of the PP denies the approximation of positions on crucial issues such as the General State Budgets or the renewal of the leadership of the General Council of the Judiciary. It also flatly rejects a government of “moral concentration” with the PSOE, which Álvarez de Toledo defended until the last day – in the interview with El País that filled the president’s patience, according to PP sources – and questions the agreements in the institutions who governs with the extreme right of Vox (Madrid, Andalusia …) “We are not – he assured – an exchange of Podemos, we are not a substitute crutch. No one in this Board aspires to be Sánchez’s minister but to defeat him at the polls” .

Members of the Government wished this week that the replacement of Álvarez de Toledo by Cuca Gamarra at the head of the popular parliamentary group could facilitate “understanding” and a “more fluid dialogue” to “advance on the big issues.” The Minister of Territorial Policy and Public Function, Carolina Darias, said it. Something that two days later has been ruined while the Executive maintains the forecast to present the accounts in September.

The national president, in addition to amending Álvarez de Toledo’s positions implicitly and under an elegant farewell message – “Thanks for everything, Cayetana, you can always count on me” -, wants to lower the aggressive tone that characterized the export voice and bet for the most “manager” profile. “We must avoid the error that to defend one’s convictions one has to dig trenches and use words like fists,” said Casado, who asked his people for “arguments, persuasion and empathy” and not fall into the “trap” of “acting with aggressiveness marking the profile until it becomes an edge “in allusion to the free flight undertaken by Álvarez de Toledo during his year, against all odds, as the spokesperson for the Congress of Deputies.

The election of José Luis Martínez-Almeida, appointed by Casado as a candidate for the Madrid City Council due to his harsh tone of opposition to Manuela Carmena, is strategic at this point because take advantage of the popularity after its transformation but he does not completely disconnect with the electorate closest to Álvarez de Toledo as he is part of the most conservative wing of the party. Cuca Gamarra, support of Soraya Sáenz de Santamaría in the primaries that confronted her with Pablo Casado, embodies what the spokesperson lacked, in Casado’s opinion: fidelity to the argument and control in the forms. In case anyone had doubts about the line to follow, the remodeling leaves another promotion: in the appointments another one stands out, announced this Tuesday: Xavier García- Albiol –the councilor of Badalona resurrected by the failure of the left, a loose verse and known for his xenophobic messages – and who came into office only three months ago, he will lead a new committee of mayors.

Given the complaints of “lack of freedom” and “autonomy” of the still deputy for Barcelona (she has not left the seat), who criticized the “authority” imposed by “Mr. Casado“The national leader makes a defense of” party politics “, not” as a weakness of character but as an act of courage. “” It is not submission or insincerity. It is nobility, “he clarified. Three days earlier, Álvarez de Toledo criticized in his rant against Casado after his departure was made public that it is” a form of slavery to be part of a party in which you cannot express yourself freely. ”

Casado’s speech also suggests that he is facing this new political course with an aspiration that two years after reaching the presidency of the PP is not enough: that the formation returns to collect the voters of the “center right”, “broaden the base of the party “and” to be the shelter of 10 million Spaniards “. “We want to go out to meet the silent majority that needs a transversal force,” he said. Five electoral defeats later, the party does not finish taking off in the polls despite the wear and tear of the Sánchez government or consolidating itself as an alternative. “Two years ago everyone spoke of the sorpasso of Ciudadanos to the PP, and a year ago, of the sorpasso of Vox to the PP. And now only the sorpasso of the PP to the PSOE. Those who took the PP for amortized were wrong,” he launched at one point of your speech. Then he reminded the leaders that the pillars of his project were still in force: “the defense of Spain, its unity and the Crown; the rule of law, individual freedom, defense of the family and accountability.”

The National Board of Directors of this August 20 has been a raft of oil for Casado. “In the PP there are no cayetanistas”, summed up a party leader. The replacement has not found opposition in the formation and, on the contrary, clears the way for the reencounter of the barons with Casado after the growing tensions caused by the outbursts of Álvarez de Toledo, which came to blow up the party’s communication strategies . This meeting has nothing like the one held a little over a year ago, which ended followed by a meal where the barons tried unsuccessfully to pressure the national president to back down with the appointment of Álvarez de Toledo.