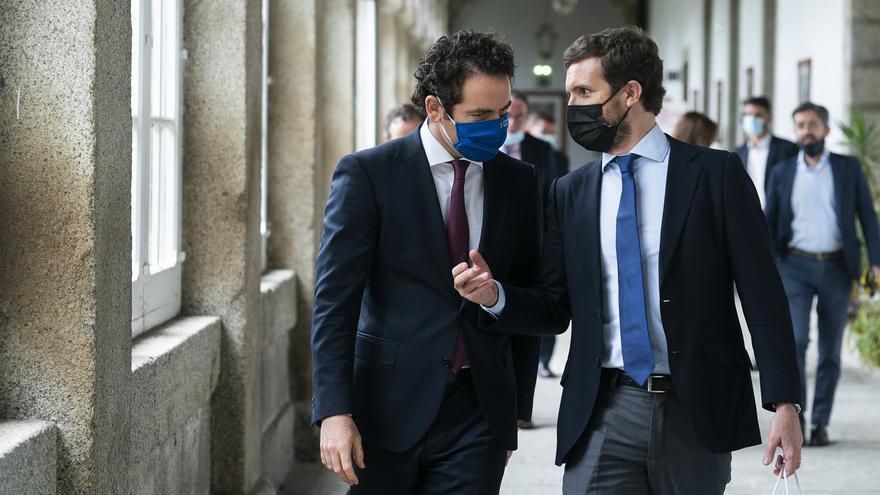 Excuse all the possible errors of the autonomous communities governed by the Popular Party, attribute to them the advances in vaccination and hold the progressive government exclusively responsible for infections and deaths from the pandemic. This is the slogan that the leadership of Pablo Casado has given to all the positions of the party before the recent increase in the incidence of COVID-19 in Spain. It is a strategy identical to that maintained throughout the crisis sanitary.

For a half year, when the first state of alarm was decreed, the popular have not hesitated to engage in politics using the sick and those who died from the virus, always with the aim of wearing down the PSOE and United We Can coalition Executive. Casado has accused the Executive of going against freedoms for limiting movements to try to stop the spread of the virus, of “lying” with the numbers of infections or to “hide” the actual deceased.

Now the doctrine launched by Genoa 13 to the popular leaders of all Spain is once again the same, according to the latest internal arguments – the slogans that the leadership of the PP sends every day to all their positions so that they repeat them in their public appearances – sent to the party and to which elDiario.es has had access: the fault that the number of infections is growing lies with the Government and the success of the vaccination corresponds to the autonomous communities.

“The pandemic is not a thing of the past, it is of the present”, urges to repeat Casado’s address in the slogans sent to popular leaders this week. “The government already made a serious mistake just a year ago when it said that the virus had been defeated and the pandemic was controlled. But it is not learning. We are in the fifth wave,” says the popular leadership, whose main leaders, however, have not yet verbalized that conclusion in public in his last statements.

Genoa 13 also asks to denounce that “Sánchez boasts of vaccination but it is the autonomous communities that are in charge of the management.” Another of the slogans included in the arguments requires the PP officials to emphasize that the Prime Minister “turned a deaf ear” to the popular pandemic bill. “And now we find that the infections are growing vertiginously. An alarming chaos is being generated due to the ineptitude of the Government,” asks Casado’s management to sentence.

Another criticism that the leadership of the PP requests to carry out to all their positions is that the Government “has relegated” the Conference of Presidents that brings together all the regional presidents “at the end of the month”, although the meetings of the Interterritorial Council continue to be held weekly of Health attended by the health councilors of all the autonomous communities and which is the body that by law must agree on the measures to face the pandemic. All this despite the fact that in recent months the autonomies of the PP – especially Isabel Díaz Ayuso from Madrid – have declared themselves disobedient on several occasions and have refused to fulfill their mandates, agreed by a majority.

Casado’s team considers, in any case, that “it is urgent to advance” that Conference of Presidents “to provide a coordinated solution” to which he already considers a “new outbreak” and “not postpone it to go on vacation.”

A constant of the arguments that the leadership of the PP usually sends every day to the leaders of the party throughout Spain is to ask them to highlight the supposed undemocratic or authoritarian character of the government. This same week Genoa 13 asks the party to insist on the idea that the Executive “has become a toxic element and its economic policy responds to social engineering.” Or that “it is urgent to call and hold the debate on the state of the nation that Sánchez intends to steal from the Spaniards by slipping the bullet so as not to account for his terrible management.

“Sánchez prevents parliamentary control and blocks the most important debate of the year. He only likes to give explanations to his investiture partners, but it is time for him to give those explanations to all Spaniards in parliament,” asks Casado’s team to repeat .

The main slogan of the PP state leadership is to insist that “Sánchez has no limits” in order to “destroy” the constitutional system. “What this government does not like, it intends to change. It tried with the CGPJ and now his target is the Court of Auditors. The Government has no limits, but we do not accept pressure. We owe ourselves to the Spanish, “says Génova 13 in its arguments, in which it also accuses the Executive of wanting to” liquidate the institutions “through” an undemocratic drift. ”

The star proposal of Casado’s management is directly related to the pressure that Vox –Necessary partner in communities and town halls but the main electoral rival of the popular– exercises over the PP to present a motion of censure for which the popular are aware that “the numbers don’t give. And it focuses on demanding the “resignation” of the Government, although the President himself has already said time and again that he plans to exhaust the legislature until 2023. The request for resignation was repeated publicly this Wednesday by the Secretary General of the party, Teodoro García Egea, during his speech at the summer courses organized by the PP in El Escorial (Madrid).

What the leadership of the main opposition party urges to shout to all the positions in the country is that “Sánchez must resign and call elections to submit pardons” to the pro-independence leaders “to the judgment of the Spaniards.” In line with Casado’s own recent public speeches, Génova 3 defends that the chief executive “came to power supported by a lie and held him back in a massive deception” and “an electoral scam.

Despite the improvement of the economic growth forecasts for Spain of all the institutions, the progress in the vaccination process and the numerous agreements reached by the Government with the social agents, the conclusion of the PP leadership is that “the Sánchez’s personalist project has plunged Spain into an institutional, social and economic crisis that must be overcome. ” That can only be done, they insist on the popular leadership, with Casado en la Moncloa.