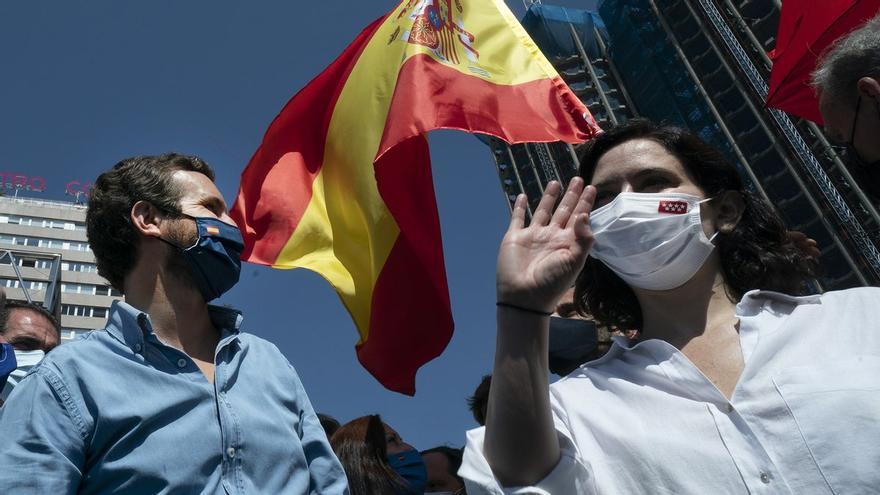 It is a message that is repeated over and over by the president of the Popular Party, Pablo Casado, and in which he insisted on the 29th, in his last public appearance before the summer holidays: “When we arrive [en 2018, al frente del PP] We were the third political force in Spain according to the polls and today we are the first. “As if they were a lifeline, Casado clings to those polls that suggest that his party could be the most voted force in the event that a general elections to try to keep his leadership alive – characterized by successive electoral defeats – for at least two years, until Pedro Sánchez calls the polls again in 2023, once the legislature is exhausted, if his forecasts are met.

That leadership has been threatened since May by one of Casado’s own great personal bets, the president of the Community of Madrid, Isabel Díaz Ayuso, whom he himself handpicked as a candidate in 2019. She swept the last Madrid elections, remaining only four seats from the absolute majority. He obtained more representatives than the sum of the three leftist forces and absorbed the entire vote of Ciudadanos – which until two months before had been his partner in the Government -, which lost all its representation in the Madrid Assembly.

Ayuso’s threat is justified by the evidence that the “reunification” in the PP of the right divided into three – in addition to the popular, Vox and Ciudadanos -, something that has obsessed Casado since his victory in the primaries, never came to fruition. materialize in the elections in which he appeared as the headliner – the popular ones obtained the worst results in their history in the two generals of 2019 -. But it did begin to forge in Madrid, one of the strongholds of the conservative parties, at the hand of Ayuso, who maintains his own profile and differentiated from the leader of the PP, with radicalized messages closer to Vox, party that is also approaching now Married in search of an electoral effect similar to that of its Madrid baroness.

This unity of the right-wing vote in the PP has been maintained in Galicia, another stronghold of conservatism, at the hands of a leader with a very different profile from Ayuso: the president of the Xunta de Galicia, Alberto Núñez Feijóo, at the that within the party they consider the maximum exponent of the most moderate sector. There, neither Ciudadanos nor Vox have representatives in the autonomous Parliament, something that the Galician president presumes, who, whenever possible, also tries to move away from the Casado doctrine, highlighting his own personality even above the party’s initials .

Among the two barons with the greatest institutional power, the model that the PP leader likes the most is that of Ayuso, who, like him, is located further to the right. However, the success of the Madrilenian leader runs the risk of ending up engulfing Casado, who has managed to improve in the polls precisely as a result of the impulse that the president’s triumph in the elections of May 4 represented.

The national president of the popular has felt that threat from his partner and friend in the streets. The general indifference with which he is usually welcomed at rallies or public events, even by his own voters, contrasts with the fury generated by Ayuso among the conservative electorate. It was seen in the concentration of the Plaza de Colón on June 13 against pardons to the independence leaders, a protest monopolized by Vox in which Casado was booed by a part of the attendees who, at the same time, clamored for the Madrid president to appear to go to Moncloa. Also, more recently, in Salamanca, when on the occasion of the celebration of the Conference of Presidents Ayuso was the most applauded and acclaimed territorial leader by the citizens.

The official message of Genoa 13 is, on the other hand, that they are not afraid that the Madrid president will try to challenge Casado for leadership, but that it strengthens him, because it was he who chose her as a candidate and because, as the leader himself usually says of the PP, the policies that Ayuso has implemented in Madrid –based on generalized tax cuts, privatizations and reduction of the public service system– are the “example” of what he would do in the case of reaching Moncloa. “We have consolidated our national leadership as the only alternative to the misrule that we suffer,” said Casado on July 21 in the act of celebration of its third anniversary as president of the PP.

Three years after his victory, Casado has not managed to overcome the division of the right-wing electorate, although his strategy of radicalization than in all the electoral appointments held since 2018 – with the exception of the Madrid elections in May in which the victory is more attributable to the personalism of Isabel Díaz Ayuso that the leader of the PP – was unsuccessful, and that led him to accumulate consecutive defeats at the polls, it is now beginning to bear fruit in the polls, and that is why it clings to those polls, with the objective to maintain and strengthen their leadership.

Studies recently published by different media point to the possibility that, in the event that the general elections were now held, the popular would be the first force in the country, ahead of Pedro Sánchez’s PSOE. Even in the latest Barometer of the Sociological Research Center (CIS), made public in July, although the PP dropped a few tenths compared to the previous study – going from 23.9% in June to 23.4% in July – those of Casado have been on an upward trend since March, when they hit its ground with the 17.9% in voting intention. Always according to the CIS, the popular ones are still installed on a comfortable mattress that places them above their 10N results, when they won 20.8% of the votes, their second worst result in history after the collapse of the elections April 2019, in which they were left with only 16.69% of the vote.

In addition to the impulse that the victory of Ayuso gave the PP, this recovery in the polls is explained by the wear and tear of the Government during the management of the pandemic and by the sinking of Ciudadanos, one of the three pieces on the right, which has suffered one blow after another at the polls since 10N, going from first to seventh force in its main square, Catalunya, and disappearing from the Madrid Assembly.

Married In fact, the formation of Inés Arrimadas is written off, weighed down by its continuous turns and already partly absorbed by PP not only at the electoral level but also in the case of some of its most prominent leaders, such as Fran Hervías or Toni Cantó, who have joined the popular ranks. The head of the opposition has even achieved the collusion of the former president of Ciudadanos, Albert Rivera, which from his law firm has advised the PP in recent months for several of its appeals in court and to which Genoa 13 seeks a fit, with its sights set on the National Convention next fall with which Casado intends to consolidate itself as “alternative” to Sánchez.

What Casado has not achieved three years after winning the primaries is to neutralize his rival on the right, Vox. Despite temporizing with his speech and his forms, Santiago Abascal’s party has remained in the last electoral appointments and resists in the polls, now assuming the main burden for the PP to achieve a comfortable majority when the polls are called again . However, Genoa 13 assumes that if the polls remain as they are now when Sánchez calls elections – the president has already said that he plans to exhaust the legislature until 2023 – the PP will have the support of Vox to bring Casado to the Moncloa.

As with Ayuso, the leader of the popular is no longer bothered by the support of the extreme right –which has also been necessary in Madrid, Andalusia or Murcia– despite staging a sort of break with Abascal in the failed motion of censorship registered by Vox last fall, which has already been rebuilt with new pacts between the two parties that compete for the same electorate but are currently needed to reach power.