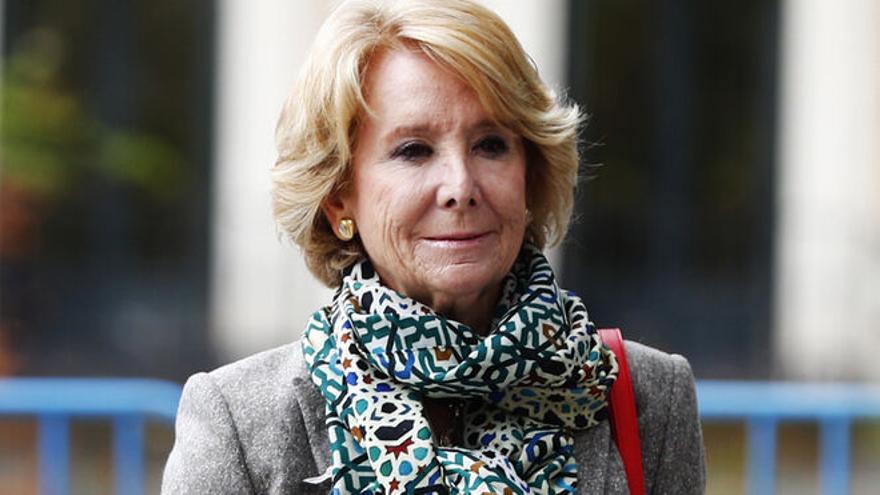 The former president of the Community of Madrid Esperanza Aguirre has advocated this Thursday for the union of PP and Vox as the only possible "alternative" to the "social-communist government" that in her opinion make up the PSOE and United We Can. For this reason, the former popular leader has advocated an understanding between the leader of her party, Pablo Casado, and that of the extreme right, Santiago Abascal, despite the break between the two leaders staged during the failed Vox motion of censure.

"Casado and Abascal have to unite, of course they do. It is true that there have been problems, one has called us a cowardly right hand, and the other has launched personal attacks that are not correct at all. But they both have principles and values ​​that they share. many Spaniards and they are two patriots ", Aguirre has settled during an informative breakfast organized by Nueva Economía Fórum.

"Abascal should have spoken with Casado before presenting the motion of censure," added Aguirre, insisting that she found it "not bad, very bad, Casado's attacks on Santiago Abascal" during the debate on the motion. censorship. "The two are two people of principles and values ​​and they are also two patriots so they will have to make the necessary efforts to unite," he insisted.

In the opinion of the former Madrid president, in order to create "an alternative to the social-communist government, not only" the center and the right must unite with the PP, Citizens and Vox. " "We must make a general appeal to all those who want to defend our liberal democracy and those are also civic associations, which Felipe González has called orphans of social democracy and socialists who do not agree with sanchismo," he stressed.

The idea of ​​"regime change"

Aguirre has made a closed defense of the management of the president of the Community of Madrid, Isabel Díaz Ayuso, who, in his opinion, "is doing admirably well." For the former president, Ayuso receives "attacks" because "Madrid has always been an open community" and "people come to be left alone." "The Government does not like that we are an open city and community," he added.

He has also referred to the new pandemic hospital inaugurated by Ayuso on Tuesday. "It is an extraordinary investment", has settled Aguirre, who has criticized the left for its criticism of the new center. "I am very used to the left protesting when a public hospital opens, what they like is that there are few hospitals and that there are waiting lists," she concluded.

The former Madrid president has also denounced that the President of the Government, Pedro Sánchez, "is following the Podemos program, which is not a government program, it is a regime change program." "They believe that with 51% of the seats they can do anything like change the Constitution. They want to take us to what Venezuela is, Bolivarianism. They want to do that in Spain, the socialism of the 21st century that is a total absence of freedom" . However, Aguirre has promised the progressive Executive "very long life."

Likewise, the former Madrid president has assured that Madrid's public television "Telemadrid, unfortunately and because of Cristina Cifuentes' PP, is in the hands of Podemos", and emphasizes that she does not believe in public televisions.