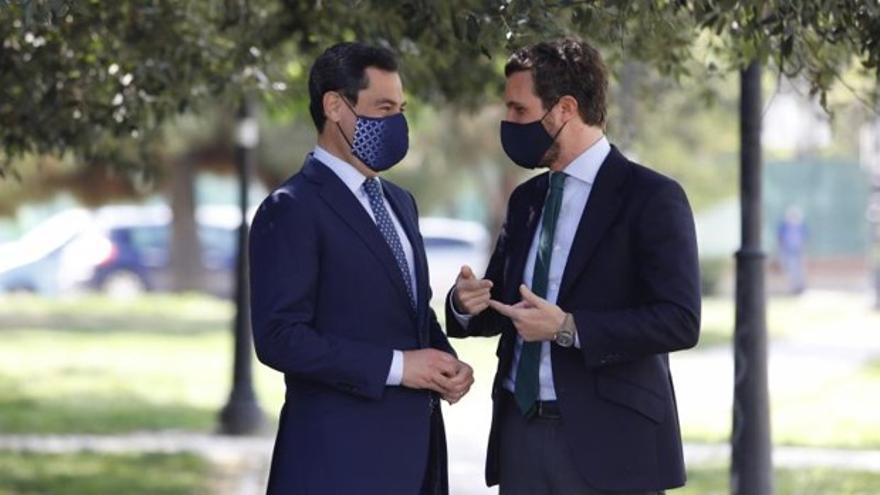 There is no internal peace in Pablo Casado’s PP. Not even in those territories where, on paper, everything is rolled to the right. If Madrid has become a headache for the party’s national leadership, now strategic differences are re-emerging in Andalusia. 24 hours after the start of the PP congress that must ratify Juan Manuel Moreno as the regional leader of the party, the leak of an audio of his vice president on the Board, Juan Marín, dismantles the arguments of the Andalusian Government in its budget negotiation and makes it more expensive the support of the other groups. The consequence: electoral advance drums return, a scenario that would be good for Casado, but which Moreno rejects. Both will coincide the weekend in Granada, in the internal conclave, where all the regional presidents of the party will sit together again, including the Madrid, Isabel Díaz Ayuso, who maintains her pulse with Casado.

Andalusia was the first of the joys of the PP under the leadership of Casado. Juan Manuel Moreno achieved what seemed impossible: to unseat the PSOE in the most populated community and that therefore contributes more seats to Congress. The December 2018 elections supposed, yes, the irruption of the extreme right in the institutions. Since then, its presence has not stopped growing in the rest of the State. The coalition government of the PP and Citizens had to negotiate with Vox the investiture and the public accounts. 2019, the from 2020 and the from 2021. But the negotiation of the Budgets of 2022 arrived and everything changed.

Next year, yes or yes, there will be elections in Andalusia. The natural goal of the legislature would be at the end of the year, but all the parties are already on the starting line of the electoral race. The first, Vox, which has been warning for some time that it does not plan to support Moreno’s budgets again. The ultra party wants the elections to be held now, where they could launch one of its main state figures, the deputy and former state attorney Macarena Olona, ​​after the fiasco of Francisco Serrano, who has ended expelled from the party for his judicial problems.

Moreno then tried to attract the PSOE to a pact that also represented an advantage for the socialists, which premiere the leadership of Juan Espadas. The still mayor of Seville needs time to make himself known and, in addition, to offer results to the Andalusians. Agreeing on the budget with the government is a way to achieve both, with the obvious risk of awarding a victory to your rival.

For this reason, during the fall there has been a continuous tug of war between the two. A strategy that has been dynamited this week with the leak to the Ser chain of an audio starring the vice president of the Board and leader of Citizens in the region, Juan Marín, where he is heard explaining to his parliamentary group that “It’s stupid” to negotiate a budget for 2022 with a somewhat strange explanation about the fact that it is an election year. “We already have some public accounts, why do others that are going to involve cuts and that we are not going to be able to practically execute?”, He is heard saying.

Beyond the internal storm in Ciudadanos, and the disavowal of Marín by other members of the regional government, both the PSOE and Vox have already announced amendments to the entirety, which leaves the 2022 accounts on the brink of derailment.

Marín has accused of the leak directly the national leadership of the PP and, specifically, the former secretary of the Citizen Organization Fran Hervías, who maneuvers from an office in Genoa to attract to the party of Casado all public office of his ex-party in the rout that takes place since the fiasco of the elections of November 10, 2019. In the PP of Andalusia, however, they do not point to Genoa directly and put more the focus on Ciudadanos or even on the PSOE.

The accusation of the Andalusian vice president reveals the hatred that he and Hervías profess. But it shows at the same time that Vox’s desire for an electoral advance coincides with those of Genoa, although for different reasons. In the national headquarters of the PP they take for granted the victory of Moreno in the next elections. This is how all the surveys point it out. ANDhe latest Public Opinion Barometer gives them 15 points more than the PSOE. A victory like this for Moreno could even make them drop the burden of the far right and would be a ball of oxygen for Pablo Casado.

The president of the PP could then limit the success of Moreno to the recovery of the PP and thus cool that of Ayuso on May 4. A summons that was the origin of the internal quarrel between the two already ex-friends. The sequence is as follows: The PP crashed in the Catalan elections in February, three months later, Ayuso achieved a wide victory in addition to containing Vox; if Moreno achieved an important victory at the polls at the beginning of next year, Genoa could try to dilute Ayuso’s success; But if Moreno rushes the legislature, as he wants, 2022 can be very long for Casado and arrive at the electoral gymkhana of 2023: regional, municipal and general.

From the national leadership of the PP they deny being behind the leak of Marín’s audio. “We have found out from the press,” say the sources consulted by elDiario.es. But the news has arrived in which Juan Manuel Moreno’s big week was promised. The Andalusian leader of the party will be endorsed this Saturday at the XVI Autonomous Congress of the PP of Andalusia. Nobody has postulated against him and Granada will attend the main names of the PP. On Friday, the regional presidents: Alberto Núñez Feijóo, Fernando López Miras, Alfonso Fernández Mañueco and Isabel Díaz Ayuso in a debate moderated by Moreno. On Saturday, the Secretary General, Teodoro García Egea. And on Sunday, the president, Pablo Casado.

It will be the first time that the five presidents sit together again in public since the PP national convention, the first weekend of October, and where the Madrid president monopolized all the spotlights with that measured speech in which she promised Casado that I was not going to compete with him for the armchair on the 7th floor of Genoa, 13, to the astonishment of some of those present. Since then, skirmishes between the national leadership and the Puerta del Sol government offices have been continuous.

The war for control of the PP in Madrid is total. In the recent congress of the PP of Castilla-La Mancha, Ayuso once again insisted that she wants to be elected president as soon as possible. In Genoa they maintain control over the calendar and will take the Madrid congress as far as possible, to May or June 2022. That is why it would be so important for Casado to dilute the figure of Ayuso beforehand and move from the success of the 4M of the Madrid president to a choral triumph of the PP brand.

This calendar has a series of milestones that for the national leadership are immovable. First come the congresses of the pluriprovincial communities. Of these, Aragon, which is scheduled for December 18, and Castilla y León remain to be held. This same Wednesday the regional leader, Alfonso Fernández Mañueco, assured at an informative breakfast in Madrid that his conclave will be held “in the first quarter” of 2022.

The event was attended by García Egea and the mayor of Madrid, José Luis Martínez Almeida, the party’s national spokesperson and whom Casado has pointed to as Ayuso’s potential rival for the party’s leadership, without his having unmarked himself. The one who did not attend was the regional president, despite the fact that the event had been announced since last week. At the same time that his party partner was speaking, Ayuso was on Antena 3 defending Cayetana Álvarez de Toledo, the PP parliamentary exporter who published a book this week that has caused new aftershocks of the earthquake in Genoa 13 after his cessation as leader of the party in Congress.

Álvarez de Toledo has come to say in full promotion of these political memoirs entitled Politically undesirable (Ediciones B) that the PP leadership is “filtering incriminating material” of Ayuso, which would suggest that there is evidence against the regional leader. Ayuso, for his part, has said of her that “she has always represented the values ​​of the PP.” He said it this Wednesday in an interview on Antena 3 while Mañueco said that he has not read or plans to read the book and settled: “A year and a half ago I recommended [a Álvarez de Toledo] that a bit of verbal de-escalation would not hurt. “

The key to the stopwatch so that Ayuso can aspire to preside over the party is held by Mañueco, who will convene his congress whenever he wants. Before, he and Genoa have to solve the mess in Salamanca, where the provincial leadership is not chosen due to a disagreement over the names and, therefore, their control. The Castilian-Leon leader can choose who he wants to benefit. Or disturb.

This Wednesday, after the informative breakfast sponsored by Asisa, Mañueco met in Congress with Pablo Casado. Both staged a tune that is not total, but that is far from the war for Madrid.