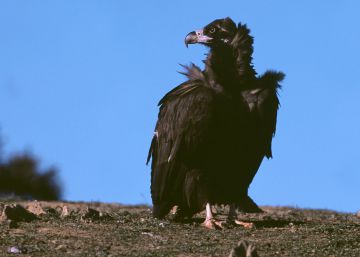 Carrascalinho He has been flying with a big brother on his back since January 2019. It was in Porto where several wildlife defense groups baptized the young man black vulture and they equipped it with a GPS transmitter and then released it in an area east of Portugal near the border with Spain. Since then, sending constant signals from its geolocator, the huge scavenger bird, almost three meters wide, has traveled half the country, between Zamora and Salamanca, Valladolid and Burgos, the surroundings of Bilbao and Santander, and back through Palencia, Salamanca and Zamora to the north of Portugal.

When the good weather arrives, as described by the Spanish Society of Ornithology (SEO-BirdLife), decided to enjoy his "summer in Galicia". He crossed the Miño and found his favorite spot in the Serra do Cando, a space included in the Natura 2000 Network, in the province of Pontevedra already on the border with Ourense. But at the beginning of July the big brother gave his alarm to the ornithologists who were following the vital adventure of Carrascalinho. Something was powerfully attractive to the vulture in the vicinity of a large wind farm consisting of three parks and 94 mills. And the animal, incessantly, flew over the territory crowned with wind turbines, playing life.

The international collaboration of several associations that watched over the vulture managed to save this rare ghoul in Galicia and listed as a "vulnerable" species in the Red Book of Birds of Spain. A team of Swiss scientists from the Vulture Conservation Foundation (Foundation for the Conservation of Vultures) transmitted the alert to the SPEA (Sociedade Portuguesa para o Estudo das Aves) and this notified the pontevedrés SEO-BirdLife group, which reported the dangerous fixation of Carrascalinho to the Xunta de Galicia.

The black vulture (Aegypius monachus) marked with geolocator, and controlled by satellite, described obsessive turns on the mills of the company Olivento, SL. As VCF describes, it normally flew at a height of 200 meters above the ground, but the high risk was, above all, in "landings and take-offs" from its "favorite site", where it was supposedly fed. Then it passed very close to the turbines, with the risk of dying from collision with the blades, as with other congeners that are not equipped with a transmitter.

"It literally flew in the face of danger, it scared us a lot," recalls the team on its website in its story. SEO-Bird Life immediately informed the Provincial Delegation of Natural Heritage of Pontevedra and, according to an official spokeswoman for the Ministry of Environment, this department of the Xunta asked the Department of Industry to order the precautionary stoppage of the 94 wind turbines. The order was for half a month, between July 5 and 19, and at that time, he explains, agents of the Xunta "combed the area in search of dead cattle", the alleged fatal attraction that tied Carrascalinho to that place.

They soon discovered that the bird fed on the remains of a dead horse they inhabit, along with cows in freedom, the Serra do Cando. When the heat squeezes many of these horses die due to lack of water and food, and others, according to VCF, fall from wolf attacks, which after the feast leave the carrion for vultures. "Recently," recalls this foundation, "a group of 40 griffon vultures that fed on a horse killed by wolves was observed."

Following in the footsteps of Carrascalinho, SEO-BirdLife ornithologists verified that with the name black vulture there were also several griffon vultures (Gyps fulvus) who ran the same "risk of death". According to the Environment, with the clean mountain already of carrion, the birds were expected to leave the area in search of another pantry. "But it seems that the black vulture has taken care of the place," says the spokeswoman for the Xunta, "because it is still around."

After 19, a good part of the wind turbines started up again, but the alert remains active and according to Gustavo Ferreiro, spokesman for the local Pontevedra group of SEO-BirdLife, those in the area that frequents the bird are still standing. Portuguese and Swiss researchers continue monitoring the flight de Carrascalinho -which in its Galician estuary has already visited such tourist places as Santiago de Compostela and the Ribeira Sacra- and share their movements with SEO continuously. The Xunta ensures that it will restart the protocol to protect the black vulture as soon as the alarms jump again.

Never a bird managed as Carrascalinho stop neither many days nor as many wind turbines in Galicia, and the key must be sought in the number of eyes that monitor it from three different countries. The Galician Society of Natural History (SGHN) "has no record" of a collaboration episode like this, capable of paralyzing three parks of the same company, with a succession of 94 mills, in the community. Other congeners were not so lucky: "We know that a few vultures have already died in wind stations in Galicia," says the president of the scientific group, Serafín González. "We asked the Xunta a couple of questions about the follow-ups that are mandatory for several years after the start-up of each new installation," he recalls, "but he didn't answer us."

A study on the effects of wind turbines led by Juan Carlos Atienza in 2011 (Guidelines for assessing the impact of wind farms on birds and bats, SEO-BirdLife) estimates that between a minimum of four and a maximum of 18 million flying vertebrates die annually (from 153 to 551 individuals per megawatt per year) due to windmills and power lines in Spain.

In Galicia, the SGHN extrapolates, they would be "between half and almost two million birds and chiroptera." And the repowering of the parks, the "huge increase in the height of the towers and the diameter of the new generation of rotors" make "wait" for the ravages to increase. In its allegations to "all" the projects that are authorized, the environmental defense collective reminds "systematically" the Xunta that "requires compliance with all recommendations" made by SEO and Secemu (Spanish Society for the Conservation and Study of Bats) to "minimize the effects".