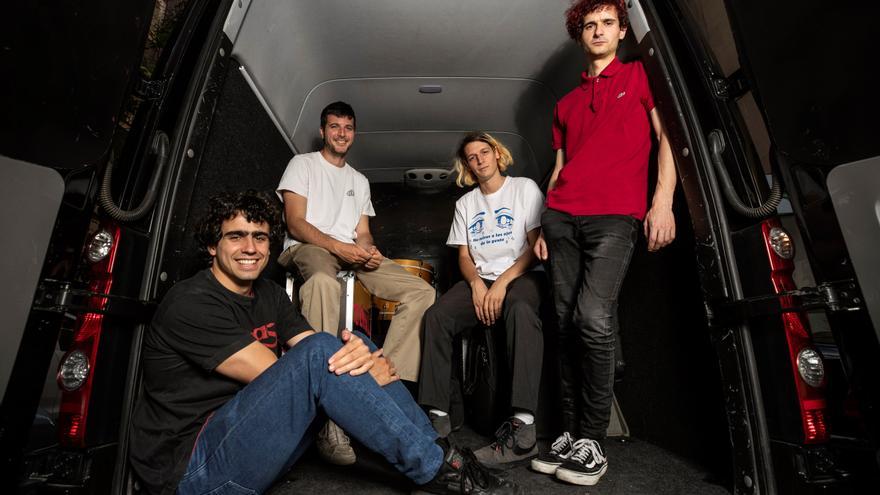 Madrid, May 26 (EFE) .- The Madrid band Carolina Durante is back. About to present their second studio album, the Madrid group stormed Madrid’s Gran Vía this Wednesday with their new song, “Famoso en Tres Calles”, a song that, according to EFE, “portrays a different type of young man to ‘Cayetano’ “.

“The idea came from Adri (a friend of the band). While we were returning in the van on tour, he released the phrase of ‘Famous in three streets’ and we liked it. So, right away I started writing the song and while I was doing it I was inspired in according to what people and according to what environments, all different from that of ‘Cayetano’ “, says the singer of the group, Diego Ibáñez.

The song, which will be available tomorrow on all digital platforms, portrays another type of young man who is identified from the first two lines of the song: “That boy on the corner is a category cool …”.

Although the record company (Universal Music) defines this single as “the group’s new anthem”, the members discard that option: “I think it will be very difficult. We have not set ourselves the goal of making another anthem or keeping the ‘ hype ‘(expectation). If it is true that someone can apply it, but for our part not, we want to make the songs that we like and not be guided by what is expected of us, “adds the singer.

A theme of “sharp guitars that draw memorable melodies and a sarcastic and pungent tone” that they believe will “mark the new Carolina Durante”: “We were clear when we made it that I wanted her to be the first to come out, because she is very crazy, It defines us a lot. It is lively, cañera, choreable, it is the one with the most single structure “, explains Martín Vallhonrat (bassist).

The chorus of the song asks: “And you, what would you be able to do to be famous in three streets?”, And the vocalist, before the laughter of the rest of the groupmates, seriously affirms that “being polite with people which is not very related. ” For his part, guitarist Mario del Valle jokingly points out: “Playing the song ‘Cayetano’ in a loop”.

“Famoso en Tres Calles” is the cover letter for his second studio album that, “if all goes well”, will be released after the summer, “around the month of September / October”. Therefore, to announce their return, they have decided to storm Madrid’s Gran Vía, specifically the steps of the Capitol cinema to surprise passers-by with their new theme.

“It was a crazy idea like all the ones we can think of – laughs Vallhonrat with his partner Juan Pedrayes (drums) -. We thought it might be cool to go there to play it without anyone knowing and see what face they put on, in plan, ‘who are these guys and what are they doing here?’

They cannot give many details about the new album yet, but they advance that it will have 12 songs, composed by themselves as a group and that there will be no collaboration. All the members agree to an album that, in their opinion, “has met expectations” from the first cut. “This time we are super happy with the sound”, confesses Ibáñez.

“You can see a big difference between the first album (” Carolina Durante by Carolina Durante “, 2019) and this one, the other was colder musically speaking, this one was not. We are also happy with the creation process, it is the first time that everyone we sat down together to compose the songs, it hadn’t happened in a long time. It’s going to be very cool, it’s very fun, light and very powerful, it’s going to like it, “bets the bassist.

Eager to return to the stage, “in conditions”, and to be able to do a tour “similar to the pre-covid era” to present her new album, Carolina During warms up with the summer festivals. They will be in Palencia Sonora (June 11-12), CanelaParty (August 12-14) in Torremolinos and at the Alcalá de Henares Giant Festival (August 26-28).