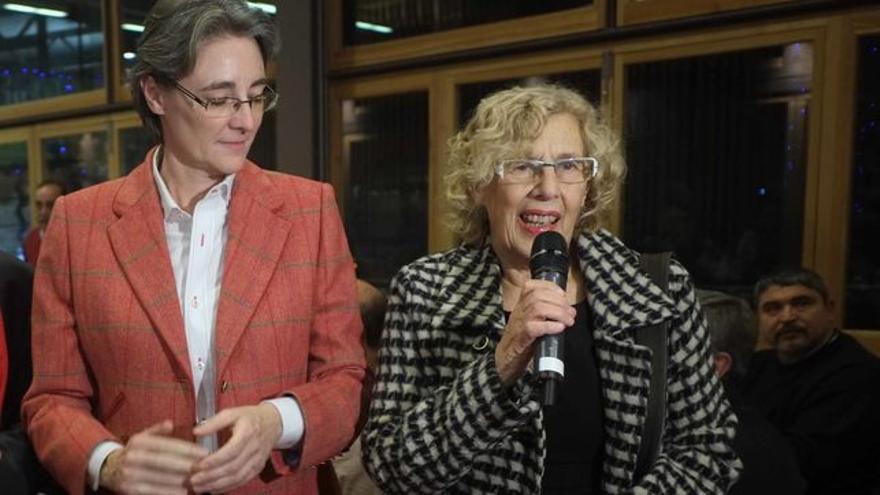 The four councilors carmenistas splinters from Más Madrid that now make up the mixed group in the City Council of the capital under the name Recupera Madrid – Marta Higueras, former vice mayor; José Manuel Calvo, former delegate of Urban Planning; Felipe Llamas and Luis Cueto, Carmena’s political nephew – are clear about the role they want to play in these two scarce years of the legislature. They have been offering themselves to the mayor, José Luis Martínez-Almeida, of the PP, to negotiate and be able to carry out their projects without having to depend on the extreme right, a group led by Javier Ortega Smith with whom the councilor signed an investiture pact after the elections of May 26, 2019 to be able to govern in coalition with Citizens.

“We are willing to be the wild card ‘antiVox’. The question is if you are willing to use us and are you going to dare to do without the extreme right of Vox to govern Madrid,” the deputy spokesperson of this group, José Manuel, told Almeida Calvo, last Tuesday during his speech in the municipal plenary session. To his surprise, the mayor, far from thanking him, replied in a contemptuous tone: “Mr. Calvo, you four are not just wild cards for me but they are also tremendously comfortable, tremendously comfortable …”, to which he added: “You are the wild card, but I will choose when to use it.”

This Friday, in an interview in Madridiario, Almeida abounded in his reasons for maintaining that attitude of suspicion against the old ‘praetorian guard’ of the former councilor, Manuela Carmena, whom Vox calls “the communist turncoats.” When asked if “he is willing to negotiate or agree with Recupera Madrid instead of with Vox”, the councilor answered: “First of all, what I would say to Recupera Madrid is that when in politics anti-sanitary cordon approaches are made to forces Perhaps they are wrong, such as Vox, which is the third largest political force in Spain. Villa Agreements, it is surprising that just a year later its red line is no longer agreeing with Vox. It is incongruous and incoherent to say that a year ago I agreed to 350 measures with Vox and a year later I say that with Vox we cannot even go to the around the corner”.

“Secondly,” added Almeida, “I would tell Recupera Madrid that the day they denounce that the General State Budgets can be agreed with Bildu, they will be able to tell me that I cannot agree with certain political forces, but Recupera Madrid does not have any The problem that the State Budgets can be agreed with Bildu or agreed with the Catalan independentists “. And, “thirdly, I would tell Recupera Madrid that, of course, it was Vox who supported last year’s Budgets and they made absolutely no movement. If it is for Recupera Madrid, this city would have no Budgets this year. So what I would say is stop hypocrisy, stop red lines and if you want to collaborate, do so in a positive and constructive tone. “

The four councilors were the ones who saved last August with your votes the Sustainable Mobility Ordinance promoted by the Government of Almeida, which Vox refused to support given that it had opted for the total repeal of Madrid Central. Also More Madrid and the PSOE voted against while PP and Ciudadanos supported it. Rita Maestre ruled then that with the new measure “not only does it not advance, but it goes back to the 80s; not only does Madrid Central not grow, but it is abolished.” But the support of Recupera Madrid allowed the new ordinance to prosper. “It is not our ordinance, we consider it little ambitious for the environmental challenges that this city faces, but we are not a government and we have to negotiate,” José Manuel Calvo acknowledged then. The extreme right turned and accused the mayor – whom they began to call Carmeida– to make “totalitarian policies” in collusion with the “podemites.”

Last week the four splinters of Más Madrid they again offered themselves to the mayor, this time to negotiate the municipal budgets without “red lines” but with some priorities: “Housing, pollution, social and territorial rebalancing and inequality”, and at the same time creating a “sanitary cordon” for Vox. This is what Calvo advanced to this writing: “We are going to convey to the government team that we are not a sectarian left, but that we work in search of an agreement, always trying to bring positions closer.” “Madrid, therefore, has good news and that is that the municipal government has an alternative to not having to agree with Vox” because, as he added, it can “negotiate with a moderate and progressive force to carry out expansive budgets and social”. “For that we always have our hand out,” Calvo insisted.

The offer came just after Almeida himself made it clear that Vox is his “preferred partner” and after announcing the draft tax ordinances – the prelude to the Budgets – that the rest of the opposition harshly criticized for considering that the Lower taxes proposed by the municipal government, especially in regard to the IBI, will favor “those who have the most.”

The former colleagues of the dissidents were surprised this Friday by the statements made on Telemadrid by Luis Cueto. in which he has assured that Rita Maestre “is not going to be mayor.” “She will not be mayor if she presents herself saying that she is the solution to Madrid’s problems because José Luis Martínez-Almeida is a horror.” “He is not going to leave and I am concerned that there are people who are very comfortable twenty years in the opposition,” said Cueto, to later place the Minister of Labor, Yolanda Díaz, as “the political daughter of Manuela Carmena.” The mayor of Recupera Madrid also revealed in the same interview that the former mayor “does not like” the division of Más Madrid although “he understands it perfectly.”

These four councilors began the legislature in the group of More Madrid, the party founded by Iñigo Errejón and Carmena to present themselves in the municipal and regional elections of 2019: the judge, to the City Council again, and Errejón, for the Community of Madrid, after abruptly break its alliance with Pablo Iglesias and Podemos. His decision opened a serious crisis in the party after Iglesias himself disavowed it. The left did not get a sufficient majority to govern in either institution.

The PP pact with Ciudadanos and Vox prevented Carmena from revalidating his mandate. That led her to abandon her act as councilor and politics. For his part, Errejón, who also did not manage to get the left to evict the PP from the Madrid Assembly despite winning 20 seats and in the face of the collapse of Podemos, only spent a few months as a regional deputy. He also resigned his seat to run shortly thereafter, in November, as a candidate for Madrid in the general elections that same year. He did so under the acronym of Más País, in coalition with Equo and Més Compromís, each achieving his seat.

Coexistence within the municipal group of Carmena’s former colleagues has not been easy throughout all this time given their political disagreements. On March 3, the four councilors finally presented the new political movement, Recover Madrid, and announced that they would go “on their own”. During the presentation of his new project, Calvo stressed that Recupera Madrid was not “neither a new political party, nor a platform, but a strategy, which is to create a strong opposition that involves uniting progressive forces with a common electoral strategy” . The councilors insisted that they took that step to be “faithful to the original project led by Manuela Carmena” in the 2019 elections, beyond “party structures”, because without the former mayor and her “institutional credibility” the group had “lost progressive centrality “and had returned to a” minority activism. “

His objective, however, was to be able to form the mixed group, something unprecedented until then in the Madrid City Council. That meant having their own resources, being able to hire staff, greater political representation and the ability to present initiatives. And they did so against the criteria of Más Madrid, who believed that this violated the law and asked that they be considered “turncoats” in order to be declared ‘non-attached’ councilors. But in a resolution dated late last August, the legal services of the Madrid City Council dismissed the appeal filed by Rita Maestre, and gave free rein to the constitution of the mixed group. The curious thing is that this response from the local corporation came only a few days after the four councilors confirmed that they were open to supporting the Mobility Ordinance of the Almeida Government, which Más Madrid considered “an infamy”, “a democratic scam” , “a favor purchase” and “an embarrassment”.

Shortly after, in an Extraordinary Plenary session held on September 7, the resolution finally took shape and the constitution of the mixed group was approved thanks to the votes of the PP and Ciudadanos and, of course, those of Recupera Madrid. More Madrid and Vox voted against while the PSOE decided to abstain. Both Más Madrid and Vox have filed both contentious-administrative appeals against this decision. Now the case is in the hands of the Justice and pending its resolution.