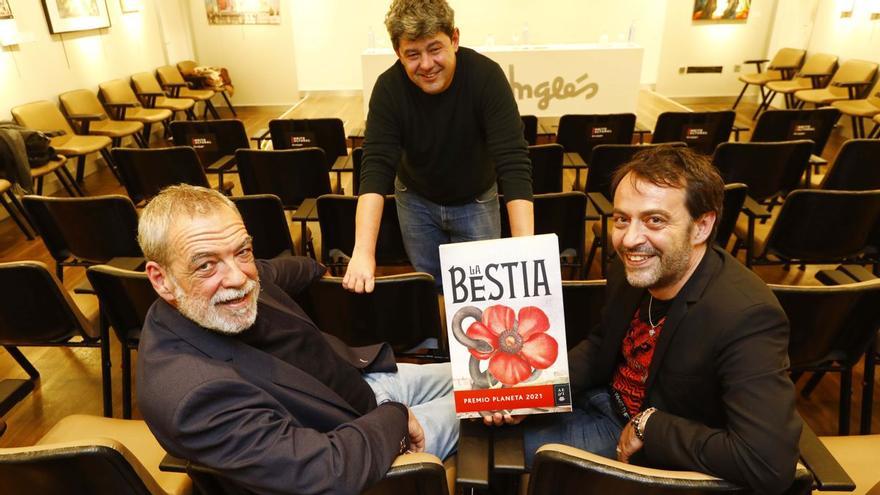 It is the publishing phenomenon of recent years and it revolutionized the book sector in Spain a month ago after winning the Planeta Prize. Carmen Mola (Jorge Díaz, Agustín Martínez and Antonio Mercero) came to light at the award ceremony and has been a topic of conversation ever since. ‘La Bestia’ is his most daring novel, a trip to Madrid in 1834 but with the stamp of blood and violence always present.

-How do you write six hands?

-We all come from the script, which makes things easier. Working together on a series we came up with the idea to bring the script writing process into the book. It sounds extravagant, but many artistic disciplines have always worked that way. We have many meetings, to close the rundown of the novel. Once that is done, the chapters go through all the hands: we write, we send it to the next one and corrections are made or something added. The mystery of all this is putting the story before the personal ego of the author. We must leave aside where each idea comes from.

-Do the three of you ever write together?

-We got together to discuss the different plots of the novel. Once that is already agreed, and the list is closed, we divide the work. Obviously, we cannot have all six hands on the keyboard: it is not operational and we would make many spelling mistakes (laughs). It would be a kind of Nacho Cano, but in reverse (laughs). The most important part of the process is not the writing, but the rewriting: the best thing is to see how the chapters pass from one hand to another and the changes that happen, whether or not we agree … Everything is agreed, because it is a democracy absolute: it is forbidden to abstain, you vote and, in the end, you always remain 2 to 1.

The most beautiful thing about the process is that no one complains bitterly, that there is no blood and that there is no vanity that prevails over the others. It seems to us that Carmen Mola is in the management of the author’s ego, which is a miracle. The three of us are very clear that we work for the good of the novel, to make it the best possible, and not for ourselves.

– It cost, with the success of the first novels, to be hidden behind the pseudonym?

-We were very comfortable. As each of us had already written novels, we had already seen our name on a cover or our book in a shop window. The first time is important, the next it doesn’t matter. We have a screenwriting education, so we are used to it. The novelist seems to be a more sacred figure, who finds it difficult to break down certain taboos, which is precisely what we aspire to with this collective authorship project. It’s about writing novels that people like.

-Many authors already write thinking about the television series or the cinema. You, who are on both sides, too?

-This communication between novel and audiovisual is very good, but I think that when you write the book you should only focus on it. You have to realize that if the novel doesn’t work, no one is going to want to make the movie. What happens to us is that, by our way of writing, the reader sees that history can be taken to the image, but we do not know how to do it in any other way. We are going for the novel, it is not a primary objective that it jumps to the screen.

-It is a step further in Carmen Mola’s career, because it is our most ambitious novel. It is a historical thriller, in which the protagonist has to find her sister, who has disappeared and, probably, was kidnapped by a serial killer who terrifies Madrid. He does it with normal characters, rays of light in the story; in a city full of violence and besieged by a cholera epidemic.

-A pandemic and very human characters, before superheroes.

-There is an involuntary relationship, because we first think of the historical event that surrounds the novel, which was the massacre of 80 friars on July 17, 1834. A very appropriate event for Carmen Mola, because there is a lot of death and blood on the helmet. joint. We saw the restrictions and sanitary measures and they all reminded us of what we are experiencing today. We realized that in 180 years either we have not evolved anything, or those measurements were correct and that is why they are still used now. That time gave us a vision to explain the present from the nineteenth century. The characters are unfortunate: a run-down journalist, the owner of a brothel, a drunken royal guard … They seem like characters with little experience but deep down, if they are challenged big enough, they become heroes. This brings us to the health workers and the people who fought in the pandemic. We have talked about 1834 but with that old norm of the classic American scriptwriters: if your novel talks about what it talks about, you have a problem.

-Why the trip to the past?

-It was also a matter of chance. We began the novel in full confinement and the first intention was to create the fourth adventure of Inspector Elena Blanco. But we realized that we did not know what our present or our immediate future was going to be like: if we were going to wear a mask, a space suit or what was going to happen. We did not feel comfortable, so we travel to the past, which is immutable. We went to the 19th century because it is especially violent and because we wanted to change a little. We had plenty of the corset of the noir novels, although we are always willing to violate these norms, because with Carmen Mola it is not certain that the protagonist will succeed. We are always unpredictable. It is a thriller set in a historical novel, as if Galdós and Dickens were chatting in a Madrid tavern. We have wanted to rehearse this genre and I think our best novel has come out.

-They have said that in the process of creation there is no blood, but in the novel there is. Why?

-We have the feeling that there is a certain modesty towards violence. Closing the door when something terrifying happens is hiding information from the reader. It seems to us like when in the movies, in the sex scene, the camera is diverted towards the fireplace: if you talk about sex, you have to teach sex. If we talk about murderers, we have to teach it, so we do not skimp on details when we have to tell them. We are not writers who take it with cigarette paper: if a girl is dismembered, she is told as she is. That’s write.

-They have been taking over the media for a month after their appearance on the Planet. How do you think the public will react to this new novel?

-We have only received affection. People talk about the surprise but it is that it was the game that we proposed: to bring fiction also to the covers of the novel. I think people have enjoyed that twist. The demand is made by the novel itself. We want ‘La Bestia’ to speak, not to speak of Carmen Mola. If you like the novel, what difference does it make to you who wrote it? The important thing is the novel, never the authors.

-Do you think that your triumph on the planet can set a trend with collective writing?

-We haven’t patented it, we should have done it anyway (laughs). The figure of the author is still that of someone who is not coughing, but I think it is an enriching experience. We, where we have learned the most, has been by coming together to create new stories. Even with everything, it is difficult for a writer to lower his ego and go down to the mud, with several colleagues, to carry out a novel. That is why we believe that we are a miracle.