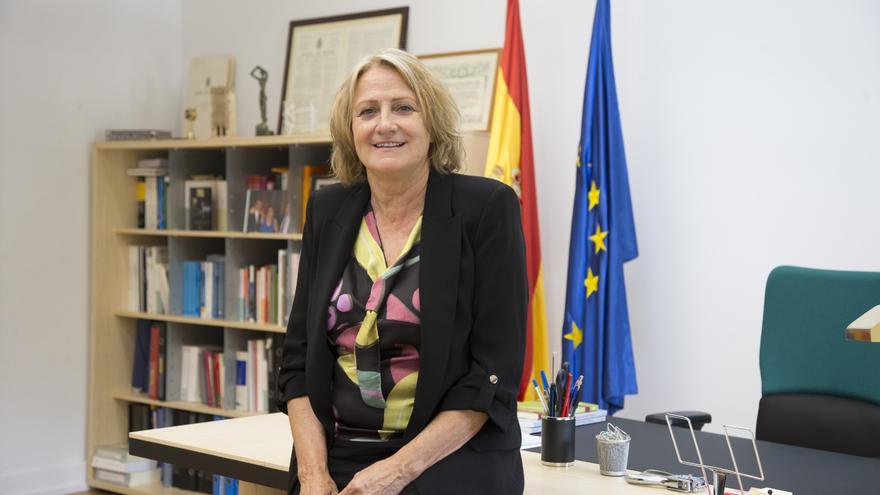 At the age of 14 she was an apprentice in a large ceramic factory and since last week she is the new head of the “labor police” in Spain, the Labor and Social Security Inspectorate. Carmen Collado Rosique (Valencia, 1959) is a rare example of the social lift that takes people from humble backgrounds and without so many opportunities of origin to the top. His parents came from very poor families, from “misery”, say sources very close to the new director of the Inspection. So when she wavered in her studies when she was about 12 years old, she was taken out of school and started working to contribute at home. Thus began a career that would lead her to join the trade union movement from a very young age, at the end of the Franco regime, and to resume her studies, which ended up adding a career in Law and two competitive examinations. Deputy Labor Inspector first and inspector later, she has been appointed to lead all her colleagues, after years of internal defense also of the rights of the workforce. Now, the boss is her.

The departure of Héctor Ilueca from the Ministry of Labor, to take the position of Vice President of the Valencian Government, released the Directorate of the Inspection of Labor and Social Security. Carmen Collado, also a Valencian Labor Inspector like Illueca, was in charge of the National Office for the Fight against Fraud since in 2020 she was appointed by Minister Yolanda Díaz. “They have had to insist a lot for him to accept the position,” say people from the close environment of Collado, who emphasize that at 62 years of age and at the end of such a long working life, taking the reins of the Inspection is “a challenge “That can give you more headaches than joys.

The seed of the Labor inspector who ended up being Carmen Collado germinated when she was “a worker”, they explain in her environment. Specifically, when I was working as a teenager in a large Valencian factory and was in a chain “taylorist pure “:” It was just another number, a piece in a gear in which no value is given to the worker. ”

So, in practice, she faced a class consciousness that she would know how to name later, but that she had heard since she was a child. His parents were from the Communist Party (PCE). One of his uncles, with a position in the party, and who went into exile in France when the Franco regime was imposed. “They were people with democratic interests. The father had great curiosity and was very intelligent. They were people who in their childhood had nothing. The father’s family had no home, they were temporary workers, they went from one place to another looking for life. dedicated to scrap metal. The mother said that she did not have a pair of shoes until she was nine years old, “exemplify in the closest environment of the new general director about Collado’s humble origins.

That is why, when Carmen went from the “honor roll” to being distracted from her studies, the parents did not take long to put her to work. Studying had to be earned, taken advantage of, in a family that had lacked everything and in which there was no excess money. First in small workshops and from the age of 14 in a large factory, Collado began working as a teenager. But as soon as he had the chance, he resumed his studies. First, thanks to the agreement that the factory itself had, there were two hours of “school” that he took advantage of to get his graduate degree. Among the most chosen options for those two hours were activities such as basketball, drawing and other leisure options.

When she finished basic education, Carmen Collado enrolled in the night school. And later, he started a law degree. Along the way, he became involved in the first steps of the Workers’ Commissions in the Valencian Community at the end of the Franco regime, as reflected in the project Sindicalistes Feministes, which Vicent Gregori is coordinating for the CCOO Women’s Secretariat in the Valencian Community. The work tries to give voice and recover the memory of trade union women who were at the beginning of the union, “whose stories are unknown,” says Cloti Iborra, who heads the secretariat today. In the next few days, the interviews with Collado will be published, which can be consulted together with dozens of women who also laid the foundations of the trade union movement of the democratic stage.

Inside the factory, Collado quickly mobilized to try to improve the conditions of the workers. “She was very young. She was about 18 years old or so when I met her and she was already supportive, combative and had a lot of prestige among the workforce,” explains Alberto Guerrero, a retired CCOO unionist who was in the union’s earliest organization in the Valencian Community. . Carmen Collado became the legal representative of the workers of her plant in the first free union elections, in 1978, and was elected president of the works council. Since he worked until he left the factory, in 84.

“Carmen was very active and had a lot of support despite the fact that there was a lot of anti-union behavior in the companies. Thanks to her, we got many delegates and affiliated people,” says Alberto Guerrero. In Collado’s environment they explain that he came to discover “detectives” who controlled what he did after work, to “try to detect if he did other things during union hours.”

When the company she worked for faced a crisis and was going to reduce staff, Carmen Collado left the company to focus on a final year of a law degree, which she studied while working. While she was unemployed, she increased her collaboration with CCOO, with whom she participated as a volunteer. “He went to small towns and passed as a legal consultation. He saw possible cases that the union could defend, or if they were just easy legal doubts, he solved them,” they explain from their environment.

In the last year of the law degree, the first examinations for what was then called “employment controllers” and later known as the Labor Subinspection came out. Collado took the opposition out the first time, with a place first in Córdoba and, later, he managed to transfer to Valencia.

Since she entered the Labor Inspectorate, first as a deputy inspector and then as an inspector, Carmen Collado has shown to be “very hard-working” and “very committed” to the workers, “who are the weakest part of the labor relationship,” several members emphasize. of the Inspection consulted that they have had her as a companion. With a special look at “the rural sector and the domestic workers,” several of them mention, Collado has chosen especially excluded groups of workers in his street work, such as seasonal workers and migrant domestic workers. “Defend those who do not know how to do it or are not prepared for it”, indicate their colleagues.

In recent years, Collado’s mobilization has moved onto the political terrain, with his affiliation to Podemos. Her children, who were in the 15M mobilizations, were the ones who led her to get involved in the project, they explain in their environment. Finally, the Labor inspector was presented to the primaries of the party for Valencia and is currently a member of the Guarantee Commission of the party now led by Ione Belarra.

His colleagues also highlight his commitment to “innovation” and “modernization” of the “labor police”, which lacks material and personal means, as the inspectors’ unions continually denounce. Collado in fact continued his participation in the union struggle within the Inspection itself from one of these unions, UPIT.

He specialized in Social Security fraud, such as under-listing of workers and fictitious companies, among other abuses, and ended up leading the team against fictitious companies of the Inspection in the Valencian Community. “It is his most important job. The team was on several occasions the one with the best results in Spain,” highlights a person from this division, who highlights Collado’s ability to “coordinate” and “work”. His most media success was the case of Factoo, of which he wrote the first report with his fellow sub-inspector declaring that it was a false cooperative.

As director of the National Office to Combat Fraud, Collado continued to influence the use of massive data crossings (the so-called ‘big data’), always hand in hand with the Social Security Treasury, to detect labor fraud. During his tenure, unprecedented campaigns have been launched, as the first to reach domestic workers.

Now, the new general director of the Labor Inspectorate faces the task of leading a body that continues to require personnel and resources, such as those demanded through union mobilization. “The companions are expectant, but we have confidence. I hope that it can do things and reinforce the Inspection”, indicates from the public organism. “I tell you that now that you are the ‘boss’ of the Inspection, do not forget about the workers. That you go to eat from time to time with some exploited worker, who in these positions do a lot of the ball. important “, says Alberto Guerrero.