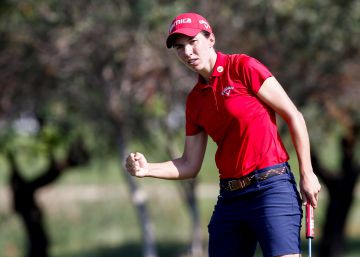 The Navarrese Carlota Ciganda, with a final lap of 71 strokes (pair), for a total of 276 (-8), has been imposed in the third edition of the Estrella Damm Mediterranean Open, tournament of the European Women's Circuit that concluded on Sunday in the CG Terramar de Sitges (Barcelona).

"It has been a triumph that makes me especially happy, both for me, for Spain, for my family and for all those who have supported me. The wind has set the field, already difficult, even more complicated, but it has It was also for the other players, "he said at the end. "The last holes were really difficult and it was not a time to risk. The truth is that on the 17th hole it crossed my mind that I could go to the 'playoff' as in 2017, but it has not been that way and I am proud to win , finally, in my country, "he concluded.

It was clear that the German Laura Fuenfstueck, who yesterday played as a very comfortable leader and without pressure, today, although with two strokes of advantage over the Spanish, he would notice her playing with Ciganda. Although the German, 24, is currently number 12 of the European Order of Merit, this is her second season as a professional and today she played a lot.

And its beginning with double bogey in holes 1 (par 3 of 140 meters) and 2 (par 4 of 283) it was going to condition it. He lost the lead, since his advantage of two strokes became a disadvantage of two (-6) over the Spanish.

The tournament was going to decay materially from the side of the Navarre in hole 10 (par 3 of 180 meters) when the German went to the right next to a 'bunker' and in the 'rough'. This cost him a new double 'bogey' when embocar with five strokes and being already four of Ciganda.

Nerves began to take their toll and Ciganda went to the 'rough' in the 11th hole and committed 'bogey', but Fuenfstueck failed a short 'putt' and also incurred 'bogey'. Both Ciganda and Fuenfstueck repeated error in the 13th hole, which was the last failure of the Spanish. At this time Henseleit, was just one blow from the Spanish.

From there until the end came the Ciganda hitter, perfect with the 'drive' and on the streets. He had the opportunity to 'birdie' in hole 16 and 17, while the German, already under pressure, was not right with the 'putt' and was limited to cover the pairs in 15, 16 and 17, where he had opportunity for 'birdie' .

Already in the 18th hole (par 4 of 384 meters), Henseleit had a remote option of 'birdie', although very difficult and ended up with torque for a lap of 68 strokes and 277 total (-7). Ciganda reached well to the back edge of the 'green' in his second blow and in the third he passed the hole and he had a final 'putt' uphill of a meter and embocalo to close with a lap of 71 strokes for a total of 276 strokes (-8); to the third, after being second in 2017 and eighth in 2018, the hour of victory arrived. With his fist in the air and hugging his 'caddy' and partner, the American James Longman, who relieved his usual 'caddy' Terry McNamara, convalescent of an operation on sight, Ciganda culminates an extraordinary year after winning the Solheim with Europe Cup

The third place of the podium went to the Finnish Sanna Nuutimen, who made a lap of 73 strokes (2 on par) for a total of 281 strokes (-3). The German Laura Fuenfstueck, who started today as a leader with 10 under par, could not stand the pressure, with a lap of 79 strokes (+8) with three double 'bogeys', 5 'bogeys' and three 'birdies' for a total of 282 strokes (-2) that placed him fourth in the final general.