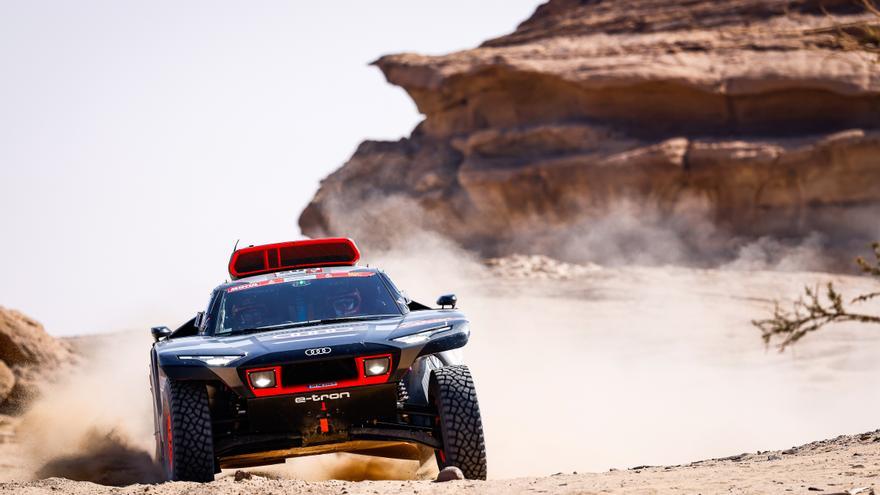 The Spanish Carlos Sainz (Audi) conquered this Thursday the most complicated stage, a priori, of the Dakar Rally, his second partial victory of this edition, in which the Frenchman Sébastien Loeb (Bahrain Raid Xtreme) cut the disadvantage by more than four minutes compared to the leader, Qatari Nasser Al-Attiyah (Toyota), who has the title in his hand.

The final victory will be resolved this Friday in a stage with a 164-kilometer special, between Bisha and Jeddah, now without dunes, and Al-Attiyah has it at his fingertips, since he will face it with a large income, close to the half an hour (28'19 "), after having watched Loeb.

The Alsatian, second in the eleventh stage, did not compromise the triumph of Sainz, who overcame all the difficulties that were presented to him and signed another triumph for the Audi hybrid, which is preparing, as his teammate Stéphane announced on Wednesday Peterhansel, to storm the title in 2023.

Peterhansel, the day after his 49th car victory on the Dakar, one behind Ari Vatanen's record, had to open the track. Ahead, a stage with many soft dunes and navigation traps.

The leader, Al-Attiyah, as in the previous days, dedicated himself to defending the income of 32'40 "without taking too many risks and with his sights set on Sébastien Loeb, his most immediate pursuer.

Navigation was complicated in the desert, also when it came to transferring the times for each control step. The Argentine Lucio Álvarez commanded the stage at 42 kilometers, without a reference time for Carlos Sainz.

The Spanish did appear in the second, the 127 kilometers, and, in addition, to lead the relationship of cars with more than one minute of rent over the South American, with Nani Roma (Bahrain Raid Xtreme) third. The Catalan signed a great opening of the penultimate day of the Dakar. Everything was tight, with more than twenty vehicles in ten minutes.

Between Loeb and Al-Attiyah, who could not keep up with Sainz then, there was a minute and a half in favor of the Alsatian, almost at the equator of the day, in the absence of dangerous terrain.

Sainz kept the lead over Lucio Álvarez, but Loeb pushed as hard as he could and was 1'46 "behind the Audi driver. Al-Attiyah was sailing through the dunes at 2:20 behind the nine-time rally champion.

The 'Matador' held out 'Séb' and celebrated his second partial victory, the fourth for a hybrid Audi in the Dakar.

Sunderland, one step away from victory in motorcycles

In terms of motorcycles, Briton Sam Sunderland (GasGas) is one step away from achieving his second overall victory in the Dakar Rally (he won in 2017) after having enforced the strategy in the eleventh and penultimate stage, in which the Argentine Kevin Benavides (KTM) went from the tears of the day before to the smile of a partial victory.

The South American rider, champion of 2021, rejoined the Dakar thanks to the new regulations of the International Motorcycling Federation, with a 16-hour penalty after having to abandon stage 10 due to a mechanical problem, and was the only one who could improve at the finish line the Sunderland registry.

The 32-year-old from Southampton set an imposing pace on the special that began and ended in Bisha and, after succeeding his brother-in-law, Frenchman Adrien Van Beveren (Yamaha), now has only the mission of controlling the last stage, of less than 200 kilometers, with the handicap that this time he will have to open the track.

That fell to Toby Price (KTM), winner on Wednesday, in the stage that was presented as the toughest of the Dakar. Those who opened the track, including the Spanish Joan Barreda (Honda), were severely damaged and lost all title options.

Barreda, who on the tenth day was affected by a two-minute penalty, started from third place, at 8'47 "from the leader, Frenchman Adrien van Beveren, who had an income of 5'15".

The Austrian Matthias Walkner (KTM), who had lost the lead - went to fourth place overall, at 8'24 "-, and Sunderland - third behind Chilean Quintanilla (Honda) and at 5'59" - had an advantage to star in the comeback by starting from twenty-sixth and seventeenth position, respectively.

The strategy was clear to both of them. Walkner also had the coverage of the current champion, Kevin Benavides, in his reengagement with the Dakar.

The Austrian set the best time at the first checkpoint (km.43), with 24 seconds over Sunderland and 47 over Quintanilla. Van Beveren was already 13'09 "and the leadership, which passed to the Chilean. Barreda, who has competed with a collarbone injury, lost 2'04".

The Castellón faced the most difficult one yet. After having left behind Price and the Argentine Luciano Benavides (Husqvarna), he had to open the track and as he passed kilometer 127 he gave 9'01 "with respect to the best time, that of Sunderland. Quintanilla left 2'48" and the British he took over in the provisional general. He didn't let go.

The one from GasGas kept the type, while Barreda ran out of options to fight for the top positions. His Honda was 13'39 "at 169 kilometers. Kevin Benavides was second on the stage 25 seconds behind Sunderland and Walkner was fourth at 3.45". Quintanilla was also beginning to say goodbye to his chances of victory, almost seven minutes away.

Like clockwork, at cruising speed, Sunderland, which this year had won the eighth stage and had already been six stages in front of the general classification (all between the second and the ninth except the seventh), was intractable except for Benavides, who took the partial victory by four seconds.

Barreda stayed more than 25 minutes - he is fifth overall at 27'54 "- and Walkner was fourth at 4'54", a worse place than he has in the Dakar classification, where he is on the podium at 7'15 "behind Sunderland, but only 23 seconds behind Quintanilla, second with a 6'52 deficit compared to the British.