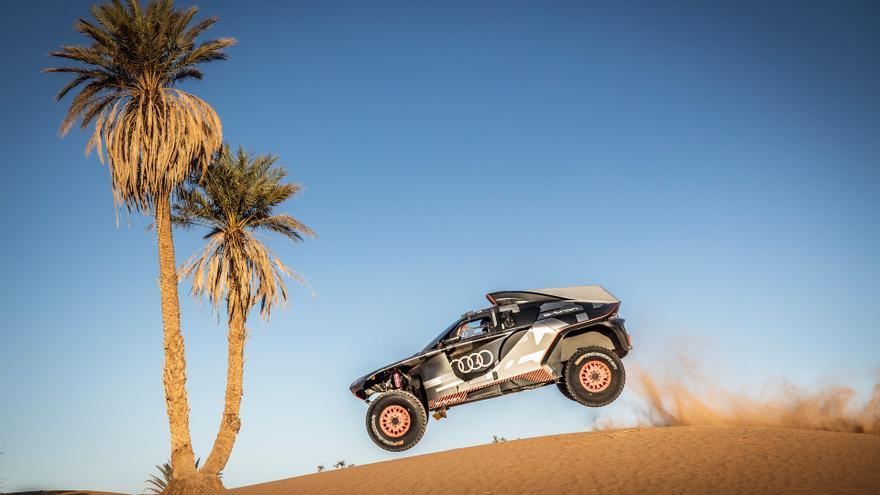 The Madrilenian Carlos Sainz will be the theoretical main asset of the Spanish motor to conquer victory in the 2022 edition of the Dakar Rally, although the three-time winner of the considered toughest 'raid' in the world will have to deal with the novelty of his new car, while on motorcycles the Castellón Joan Barreda (Honda) hopes to end his bad luck with this race.

Saudi Arabia It will be the stage from this Saturday to January 14th for the third consecutive year of a Dakar, whose organizers have prepared new challenges and a lot of sand to retest the resistance of the participants and their vehicles, many very innovative as is the case of the two-time world rally champion.

Sainz will race this time with Audi, his fourth mark after doing it with Volkswagen, Peugeot and Mini, with whom he triumphed in 2010, 2018 and 2020 respectively. The German brand has opted to face the harshness of the rally for the RS Q e-tron, innovative and pioneering electric prototypes, but one unknown about how their performance will be.

The 'Bullfighter', who will be accompanied by his inseparable Lucas Cruz, will share a team with another of the favorites, the French Stéphane Peterhansel, 'Monsieur Dakar', who will defend his fourteenth victory, eighth on four wheels.

However, Sainz hopes to use his experience behind the wheel to try to avoid problems and place himself in a competition where there is no day of relaxation and which is presented in the category T1 +, where there have been regulatory changes, as very competitive and without a clear favorite.

The Qatari Nasser Al Attiyah (Toyota), triple winner, the last in 2019, and undefeated this season, and the Spanish Nani Roma, who faces his twenty-sixth Dakar, and the French Sebastien Loeb, both with the BRX Hunter, will be other theoretical candidates for victory.

In addition, in cars, there will be the debut of Laia sanz, which after demonstrating its competitiveness in motorcycles, will test the steering wheel of a Mini in the T1.1 category, while Cristina Gutierrez (Overdrive) will be a contender for everything in T3 as world champion and that last year she was able to win a stage of the Dakar, something that only the German had achieved. Jutta Kleinschmidt. The ex-motorcycle racer Carlos Checa He has also been seduced by the Dakarian adventure and will make his debut in the car raid with MD Rally Sport.

As for the two wheels, everything indicates that the fight will be as usual between KTM, the great historical dominator of the 'raid', and Honda, which has won the last two editions, the last one with the Argentine Kevin Benavides, which has changed from the brand of the golden wing to the Austrian one.

Benavides will form a powerful team along with two other winners such as the Austrian Matthias walkner (2018), world champion this year, and the Australian Toby Price (2019), with the support as advisor of the Spanish Marc Coma, five times winner of the Dakar.

For its part, the Japanese manufacturer, who signed another expert in the 'raid' like the Chilean Pablo Quintanilla, keeps Bravec and Spanish as assets Joan Barreda, that he hopes at last to make good his everlasting candidacy. The man from Castellón has won more stages than anyone (27) of those who compete, but of his eleven editions, he has only been able to be fifth in 2017, with painful abandonments in 2013, 2014 and 2015 when everything was looking in his favor.

All the participants who have registered in this rally, which always maintains its adventure component, will start this Saturday with a small aperitif in the form of a 19-kilometer special between Jeddah and Ha'il, with 595 kilometers of link. From there, almost 8,000 kilometers more, with more than 4,200 of special, a route renewed compared to 2021 by 70 percent, with a very hard start with the marathon stage on the third day and the longest (465 kms) two days later, and the presence of sand and dunes.