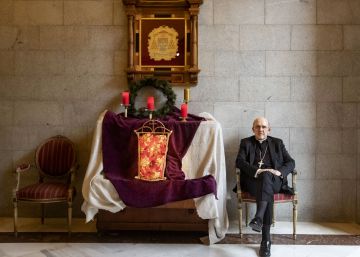 Cardinal Carlos Osoro Sierra (Castañeda, Cantabria, 74 years old) arrived at the pontificate of Madrid in October 2014, to make the Church "a house of harmony." He said so in the inauguration as a substitute for the then almighty cardinal Antonio Maria Rouco. He is the prelate chosen by Francisco to lead an ecclesial spring in Spain. Six years later, some parishes and the Vatican embassy have appeared with graffiti. “Osoro es Judas”, “Traitor bishops”, they said, among other criticisms. The anti-clericalism of rights is reborn, like the one that emerged against Cardinal Vicente Enrique and Tarancón in the 1970s, for promoting the Roman Church to deny its complicity with the Franco dictatorship.

"Tarancón al paredón", said then the graffiti of the Guerrillas of Christ the King. "I dare to the wall" now claims the far right, pulled by Catholic media. Francisco is branded as a heretic even by some cardinals, with an imposing contempt. They call him "Papacisco", "armalíos", "the antichrist". There is no week that they do not express the same rejection by Cardinal Osoro for being the face of the Argentine pontiff in Spain.

Question. Is it true that the Pope refuses to come to Spain precisely because of that atmosphere of intra-ecclesial discord?

Reply. That is not the reason. The Pope has made an option, which is to travel to the poorest countries or where Christianity has problems or is incipient. For example, he has just traveled to Japan, where there are very few Catholics.

P. But he has been in France, he visited Germany, he was in the US ... He says he will come to Spain when you are at peace.

P. Have you discussed the matter with the Pope?

P. Do they talk often?

R. Sometimes. The Pope is well informed, not only about Spain, about humanity in general. He has an extraordinary capacity and knowledge, and a great vitality.

We had lunch alone in the dining room of the small apartment where the cardinal lives, a stone's throw from the Plaza Mayor in Madrid. A portrait of the mother presides over the room. The rest of the decoration summarizes the biography of the first prelate of Spain: a picture of the cathedral of Orense, his first destination; a sculpture of La Santina de Covadonga from when he was archbishop of Oviedo; memories of his pontificate in Valencia and the flags of the four venues in which he has been prelate. Of late vocation, he made a civil career, was a teacher, had a girlfriend before becoming a priest in Salamanca and began as a priest in a parish in Torrelavega (Cantabria) where strikers chased by the police took refuge. It was then that he forged a way of being that distinguishes him from bishops to use: lavish hugs, shake hands tightly and talk to journalists. "What less, although, of course, maybe they also criticize me because I gave EL PAÍS this interview."

P. Benedict XVI was said to be surrounded by wolves. Finally, he left office. Against Francisco the tigers have been unleashed.

R. There are groups that feel disappointed, but as much as tigers ... The Pope's answers to the problems, the commitment to the poor, his allegations of mistreatment of emigrants and his commitment to dialogue with other religions. It is normal that there are criticisms, but I do not see that they are so many.

P. Do you think disgruntled hierarchs feel alluded to when Francis asks for a poor Church, for the poor and that he smells like sheep?

R. Of course it has to do with that. But everything is in the life of Jesus. God is the father of the whole world, also of those who are not in our church.

P. There are bishops who still say that outside their church there is no salvation, and even that error has no rights. Instead, Francis rejects hell as eternal damnation, as merciless punishment.

R. The Pope is not that he questions hell, but he makes singular observations. And he is optimistic, despite the serious problems of humanity. I am too. Virtues have more strength than defects.

P. There is also criticism of the decision to suppress the pontifical secret before child abuse by ecclesiastics.

R. There are always resistances. By the way, I have to say that there has been less abuse in the Church than in other organizations.

P. The difference is that priests and bishops believe they are moral referents. The ecclesiastics who abuse minors use a power and impunity that comes from the Church itself.

R. Clear. The Church has to be exemplary and set an example. It is what the Pope has proposed and what some criticize him. But do not be afraid to open the doors. When they open, the solutions are facilitated.

P. Francisco Franco, the dictator's grandson, told him by letter that never again, neither he nor his followers, will mark the X again in favor of the Church in the IRPF forms. He blames him for facilitating the exhumation of the dictator. What did he answer?

R. Nothing. I have nothing to say. That is a matter overcome.

P. It is said that in exchange for not opposing you to exhumation, the current Government favors you not to publish the list of tens of thousands of registrations made by the bishops.

R. It is the first time I hear it. It has nothing to do, at all.

P. On the registration, I recently read in the Catholic magazine Vida Nueva that, after the abuse scandal, nothing hurts the Church more than the perception that it enrolls assets and executes contracts with the indifference of any vulture fund.

R. Everything has been done within the law, there have been no privileges.

P. The Government of Mariano Rajoy suppressed that prerogative of the bishops because it was a privilege and there have been abuses. If the current Executive denies the data, it is because there is something that he does not like to be known.

R. I don't have that perception. My news doesn't tell me that.

P. On the problems that the archbishop has with the alienation of some of their properties, they are accused of behaving like reluctant renters.

R. When this news is given, it seems that the Church does everything alone. I preside over foundations that have properties, but we are not alone in the board of trustees. There are also other institutions, such as the mayor's office of Madrid and the Community. The news is to blame the bishop.