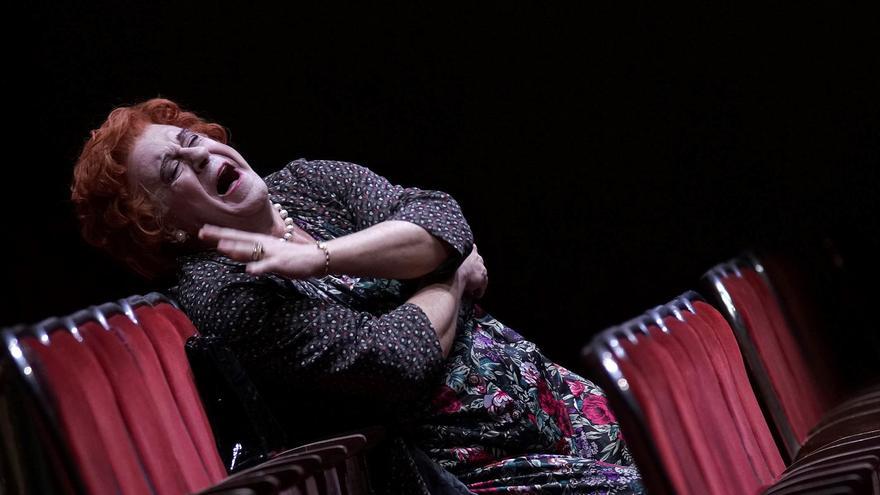 Madrid, Jun 2 (EFE) .- A physically unknown, but vocally recognizable and in a state of grace, Carlos Álvarez, has raised the audience of the Teatro Real, who had already cheered him with energetic Bravos! before the second act ended.

Álvarez (Málaga, 1966) appears on the scene wearing a wig, a flowered dress and pearls around her neck, perfect to give life to "Mamma Ágeda", from Donizetti's opera "Viva la Mamma", which was premiered for the first time this Wednesday in the Real.

A woman who breaks and rips, ready to do anything so that her daughter can stand out as "prima donna", a role for which the Malaga-born has not hidden his torrent of voice, although he has blurred it with falsetto, in some moments, just what Gaetano Donizetti wanted, when he created this opera.

The Italian master deliberately assigned this female character to a baritone with the intention of giving this "mamma" the packaging, energy and strength of his timbre to defend her offspring.

Nino Machaidze is "Daria", the flirtatious "prima donna" to be displaced by "Mamma Ágeda". The Georgian soprano once again demonstrates the mastery of her voice as "Daria", as she walks the stage showing off her musical genius as well as her whims. The stage and vocal duel of the first act between her and Álvarez is impossible to forget.

During the presentation of the play, the musical director Evelino Pidó stressed that "Viva la Mamma" is a demanding work, which asks the singers to also be actors. "It is what the score requires" and it is what is contemplated for two hours on stage.

A hilarious libretto, where its objective has been "to respect the style within the sobriety".

Perfectly made up like a "donna", Carlos Álvarez has returned to Real, sixteen years later, under the direction of Laurent Pelly, with this opera by Donizetti (1797-1848) with which he has provoked, on more than one occasion, the laughter of the public, with gestures and histrionic gestures, but not exceeded.

With "Mamma Ágeda" the baritone unleashes his feminine side in postures and gestures, although when he gets angry it results in an erupting volcano. "I even thought of growing my nails long, but it has been impossible for me," Álvarez said jokingly during the presentation of this opera, in which, as the libretto indicates, he plays a woman who sings badly.

The tenor Xabier Anduaga, "Guglielmo", the first tenor, recently awarded the Young Singer award at the third edition of the Opera XXI Awards, shows that from a young promise he begins to sign his presence on stage with capital letters; while Borja Quiza, takes "Procolo", the cowardly and fearful husband of the "prima donna", to his land, showing off at every step.

Between all of them, with Sylvia Schwartz, as "Luigia", the "seconda donna" and daughter of "Mamma Ágeda", the director Laurent Pelly has managed to agree on a compact and cohesive cast that enjoys and makes those who listen to them enjoy.

"Viva la Mamma" is an opera within an opera. Donizetti created this buffoonery, in which he makes fun of mediocre characters, with an ego greater than the theater in the provinces in which it is represented, in the heat of struggle to get perks and get away with their cravings, a way to look better than the rest of his classmates.

Tyrannies of divos, envy and power struggles, a parody of what happened in operatic productions of another era, which sometimes still resonate as "familiar", despite the fact that, as the actors have warned, "they are already out of character. reality".

The director proposes a "flash-back" with the scenography where the story, which begins in a parking lot, reveals in the second act that this space was formerly a provincial theater, which has been unceremoniously demolished, a "satire towards the world of culture and its evolution ", said the director.

Pelly, who also signs the costumes, points out that he is interested in comedy to the extent that it expresses tragic elements.

Opera belongs to the first period in the prolific career of Gaetano Donizetti (1797-1848) and was long forgotten, until in the 1960s it once again captivated audiences with its lighthearted satire on the world of opera.

The Royal Theater has co-produced "Viva la Mamma" with the Lyon and Geneva Operas, of which eleven performances will be performed from June 2 to 13 with a double cast, of which Luis Cansino and Sabina Puértolas will take the witness tomorrow, in the main characters, Gabriel Bermúdez, Francesca Sassu, Alejandro del Cerro.