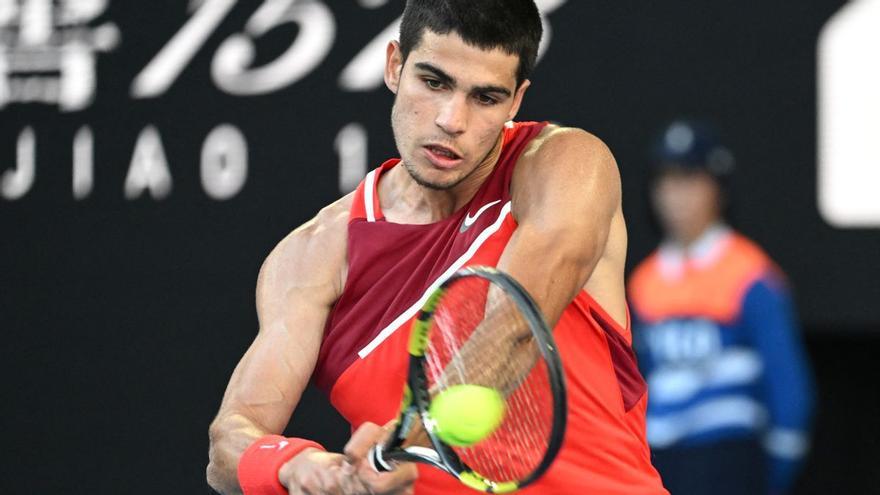 the murcian Carlos Alcaraz Garfia fell to Italian Matteo Berrettini, number seven in the world, in a third round match of the Australian Open which was resolved in the fifth set and where the young man from El Palmar equalized the duel after losing the first two sets (2-6, 6-7, 6-4, 6-2 and 6-7) after more than four hours of play in a day with 30 degree temperatures. Experience was key in the sudden death of the fifth set, but the player from El Palmar went down with his head held high and offering a high level of play against a rival who had to work hard.

Alcaraz started the match strongly, very focused and offering a high level. In the first two games with Berrettini's service, he had up to five service break balls that he did not take advantage of. Until 2-2 the set was even, but from that moment the Murcian suffered a significant drop in his game. He stopped forcing his rival's backhand and lost concentration, losing the set 6-2.

Things were worse in the second round. Carlos Alcaraz was out, at the mercy of his rival, who dominated the game with his spectacular serve. Up to seven consecutive games the Italian won, which was placed with a disturbing 1-3. But then the pupil of Juan Carlos Ferrero resurfaced, who recovered sensations. He began to vary his shots more and the height of the balls, something that did a lot of damage to Berrettini. He equalized the match at four after a break and the set was decided in sudden death, where the dominance of the number seven in the world was clear (6-7).

Alcaraz had to pull epic to try to equalize the match with two sets against. And he did. Until the ninth game, each player won his service, but at that moment Carlos Alcaraz managed to break his serve, which he did not miss out on to win the point (6-4) and the possibility of taking the match to the fifth set. The cry with which the Murcian closed this sleeve was totally prescient. He had regained his confidence and anything could happen with the young talent from El Palmar on a roll.

The Murcian offered a recital in the fourth set. Despite having all the pressure on his shoulders, he brought out that competitive gene that he has always shown during his sports career. The equality was maintained until 2-2, at which point Berrettini began to show signs of weakness. And Alcaraz did not miss the opportunity to break his rival's service in two consecutive games and place himself with a 5-2 that was decisive, since in the next one, with his service, he won the point and equalized the match.

Berrettini began serving and twisting his ankle on a lateral shift. Alcaraz, in a gesture of sportsmanship, approached the Italian to inquire about his physical condition, a gesture that was greatly applauded by the Australian Open audience.

The Italian was able to follow the match after being treated by the medical services and continued to watch a match of a high level of tennis. The tension was noticeable on the court because the pass to the round of 16 of the first Grand Slam of the season was at stake. But Alcaraz's pulse did not tremble. That yes, his rival did not give him concessions with his service and the clash reached its decisive phase with 4-4. The pressure grew as Berrettini also won with his serve and went ahead 5-4, but the Murcian easily resolved the following game with an ace included, leaving his rival blank (5-5). The Italian put the pressure back on the young man from Murcia to win his service easily and put the match at 6-5. And again the pupil of Juan Carlos Ferrero responded with solvency to play the pass to the round of 16 in the sudden death, which was disputed to ten points, after saving a match point.

The situation became very complicated for Alcaraz when Berrettini achieved a mini break and took a 6-4 lead. With a drop shot he closed the gap (6-5), but the Italian won his service again (7-5). Once again it was time for the Murcian to come back and with all the pressure on him. The Italian pushed Alcaraz to the limit by winning the next point with his serve (8-5) and rushing into the next (9-5), leaving Berrettini five chances to win the match. And a double fault from the El Palmar player closed the match.