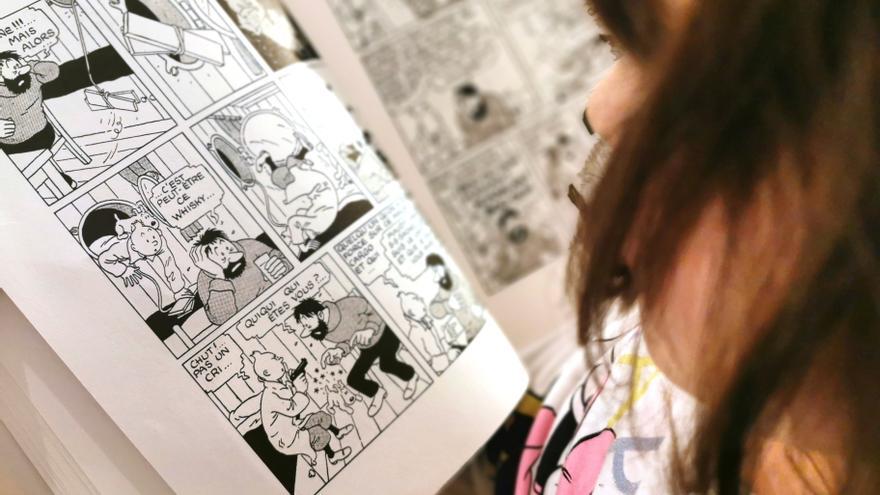 Brussels, Jan 8 (EFE) .- The moody Captain Haddock, that drunken sailor in a blue sweater and a good heart who shouted “A thousand million thousand demons!” in Hergé’s cartoons, he celebrates eighty years since he met Tintin, the intrepid journalist with whom he became an inseparable travel companion since January 1941.

“I needed a drunken ship captain. I made many sketches to try to find that character and I always started by putting him as a drunk, as someone who really drank a lot,” the Belgian author Georges Remi (1907-1983) said about his character in 1964, universally known as Hergé.

A fan, a lot, to the drink, of aristocratic origin and settled in the castle of Moulinsart, the bearded sailor Archibal Haddock made his debut in a Tintin comic strip when the strip was published in black and white in the Belgian newspaper “Le Soir”, controlled then by Nazi propaganda.

They were fragments of what in 1941 would become the pages of an album entitled “The crab with the golden claws”, republished in color in 1944, where Haddock is a hopeless drinker who, over the years and thanks to the influence of Tintin, is moderating their customs.

“He gives himself the pleasure of having a glass of whiskey or two, even three, but he does not fall into the excesses of before,” Hergé said about a character inspired in part by his friend the cartoonist Edgar P. Jacobs, author of Blake and Mortimer , and vaguely reminiscent of the writer and navigator Ernest Hemingway.

“At first, he is not pleasant at all. He is a drunkard, a slave to his vice: a real disaster”, Hergé admitted about a kind of patrician of the European gentry of the 19th century in the forms of a 16th century pirate.

Before Haddock, he had paraded through the comic series Snowy, the white dog that accompanies the journalist in the beige raincoat from the first cartoons, published in 1929 in a supplement to the defunct newspaper “Le Vingtième Siècle” and reunited in 1930 in the album “The Adventures of Tintin in the Land of the Soviets”.

The clumsy policemen Hernández and Fernández (1934) or the soprano Bianca Castafiore (1939) also preceded the rough sailor, while the last of the great acolytes of Tintin, this one, after the captain, would be Professor Silverstre Tornasol, who would arrive in 1944, with “The Treasure of Rackham the Red”.

Although he was neither the first nor has an easy character, or precisely because of that, Haddock is the main counterweight to the protagonist and the most human and endearing character in the series: a naive curmudgeon with a good heart who is closer than Tintin, with a less strident personality, but flatter.

“Tintin is an ideal creature while Haddock is made of flesh and blood. He has flaws, humor and his famous swear words. He is a character who accompanies his friend Tintin everywhere, defends him and helps him. He is the most realistic character”, explains Dominique Maricq, author of half a dozen titles on Tintin and Hergé, to Efe.

It is enough to remember how in “Tintin in Tibet” Haddock accompanies his friend without hesitation on a journey that he is convinced will bring them certain death or how in “The Jewels of the Castafiore” the captain offers a gypsy family that lives together with a landfill that is installed on their farm and later defends their innocence when they are attributed a robbery due to racist prejudice.

THE ART OF INSULTING

Haddock’s most characteristic trait are his expletives, words chosen for their sound that when placed in the sailor’s mouth acquire such aggressiveness that they function as insults, although they rarely are because of their meaning: ectoplasm, phlebotomy, lepidopteran, Zapotec, orichteropod, technocrat …

That talent to discredit, which the Casterman publishing house has gathered in a volume entitled “The expletives of Captain Haddock”, comes from a dispute that Hergé witnessed in a fishmonger, where the shopkeeper, who was arguing with a client, snapped: “Tell me, kind of a pact to four “.

Hergé deduced that the ingenious fishmonger had taken the phrase from the “Pact of the Four Powers”, an international agreement reached in 1933 between the United Kingdom, France, Italy and Germany, and appropriated the expression for the captain’s throat to convert it in an expletive.

“I thought it had a wonderful sound. Obviously, it was not an insult, but an expression, but I used it to give Captain Haddock a wider vocabulary and use words that were not insults, but had a sound that made him seem “, explained the cartoonist of the sailor who popularized the phrase” Rays and sparks! “.

The genius of a comic book author, summarizes the “tintinologist” Dominique Maricq, is that some words, objects or characters come out of the album and remain “among us”, converted into references that are used in newspapers or on television.

“Although eighty years have passed, Haddock has not had a wrinkle,” he says.

‘Be modern’, contemporary art that challenges the crisis of the sector in Brussels