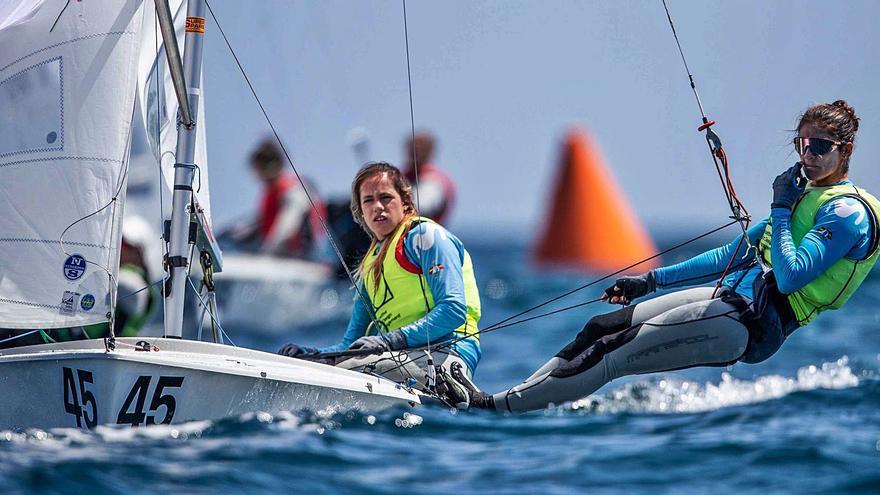 Patricia Cantero and Silvia Mas faced the final Medal Race with options to fight for gold. They were second to ten points behind the French Lecointre and Retornaz. Behind, the Swiss Fahrni and Siegenthaler were three points behind the Spanish. The British Mills and McIntyre also pointed to the fight for the podium at one point behind the Swiss.

All possibilities were open for the Gran Canaria and the Catalan after a championship in which they premiered in third position to take the lead on the second day, since they would defend until Thursday.

Patricia Cantero and Silvia Mas faced this Medal Race with enthusiasm and willing to give their all to reach gold, but a difficult start due to the lack of wind and fought for finding the best position to face the regatta led them to a sailor’s worst nightmare : the Race Committee marked two boats offline.

The jury first gave notice to Spanaky and Tsoulfa’s Greek ship and left the fleet and followers in suspense until minutes later they were positioned aft of the Spanish ship, putting an end to all the hopes cultivated.

The Canarian-Catalan duo added a 22 that erased the dream of the medal, but managed to stay in fourth position, highlighting the good partial results added up to that moment and that reflect the excellent level achieved by the Spanish team’s sailors, the current world champions of the class.

The disappointment suffered in the women’s category of this European Championship in the 470 class was tempered by the final result of the national crew taking part in the men’s.

The crew made up of Jordi Xammar and Nicolás Rodríguez took the silver. On a difficult day, those who will also be Olympians in Tokyo took to the water yesterday with clear accounts in the Medal Race, with ten boats in contention. A first place of yours against a last of the French would give them the gold; silver had to be fought with the Swedes, who started tied on points and with the same chances as the Spaniards. The Swiss were too far away to enter the equation and New Zealand, which was second, was playing another war.

The Catalan-Galician duo once again proved that they were capable of anything and they fought for the gold while the French lagged behind, engaging in a hand-to-hand with the New Zealanders at the head of the fleet in the third section of the test.

A penalty for the Spaniards broke this magic and an agonizing arrival, without wind, at the last leeward mark, brought a thread of hope for the last section that began. But the wind set the tone and pushed the British to victory, distributing a fifth for the Spanish, a seventh for the Swedes and a tenth for the French, last.

Everything can happen in a regatta and the gold was almost served for Xammar and Rodríguez who, finally, hung the silver medal, leaving the continental title in the hands of the Gauls Peponnet and Mion, while the absolute victory in the final classification fell in New Zealanders Snow-Hansen and Willcox.