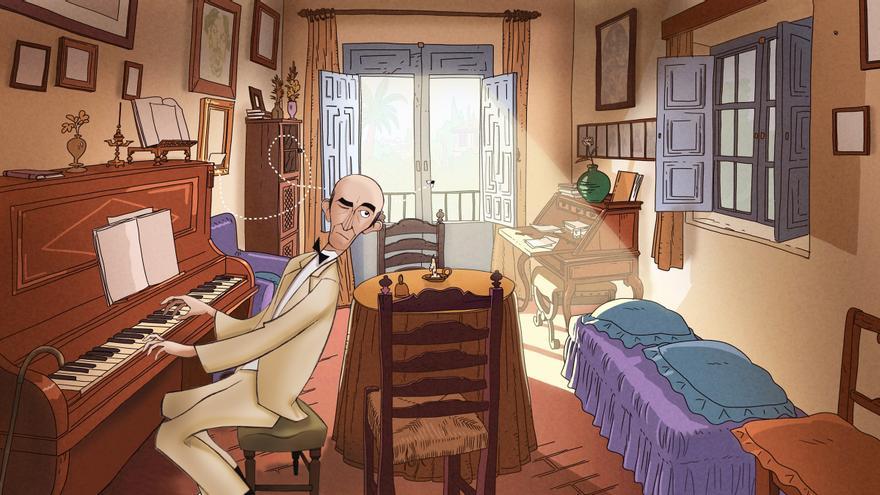 Paris, Mar 9 (EFE) .- The first national cante jondo contest took place in Spain in June 1922. It was a party promoted by Manuel de Falla and that, almost 100 years later, returns to the present with an animated film, “Nights of duende and moon”, which recovers the organization and celebration of that historical moment.

The project is signed by Manuel Sicilia and José Sánchez Montes, who from this Tuesday until Thursday will present it to the market at the European animation forum Cartoon Movie in Bordeaux, baptized in English as “Moonlit flamenco”, to expand its international diffusion.

It is still in development, but that future 85-minute film made by a 2D computer introduces the composer, the poet Federico García Lorca, who helped him in his endeavor, and that Granada competition reserved for non-professional singers and launched for prevent that cante from disappearing.

“We have entered a territory little explored”, admits by telephone to EFE Sánchez, who as a producer is behind hits such as “La isla minim” and also accumulates a long history of documentaries focused on that art.

Its documentation process was exhaustive, but the rigor does not cloud an epic story and characters that, beyond their historical relevance, hid a very attractive and cinematographic character, according to their authors.

The author of “El amor brujo” or “El sombrero de tres picos” (1876-1946), who at that time was already a recognized genius and had been in France together with great musicians of the time, such as Claude Debussy, had “a very strong personality,” says Sánchez.

“He was very hypochondriacal and very maniacal. He had a series of rituals that he did every day and they occupied him two or three hours. He had a great mania for cleaning, a great fear of diseases, and he was very religious. It didn’t take away a bit of creativity and a certain sense of humor. ”

And the Lorca (1898-1936) who accompanies him in this adventure is not “the universal poet, who has no comparison, nor the one at the end of his life, who has a very sad story, but a young and sparkling one”, adds Sicilia , director of films such as “Justin and the sword of courage” (2013) or “The lost lynx” (2008).

His contest was held on June 13 and 14, 1922 in the Plaza de los Aljibes in Granada and this film has as its soundtrack and musical background both the creations of De Falla himself and recordings of the musicians who participated.

“Everything that is told is 100% real”, emphasizes Sicilia, who opted for 2D because that technique fitted in with his desire to simulate the force of flamenco in the image, “with lines that break and color that explodes”.

His project, which aspires to see the light in 2022, coinciding with the centenary of the contest he is talking about, is one of the nine Spaniards participating in this XXIII edition of the Cartoon Movie, which due to the pandemic has summoned the authors, buyers , distributors, investors and potential partners digitally.

This event, inaugurated this Tuesday, will present a total of 55 feature films from all over Europe, either in concept (22), in development (22), in production (8) or in ‘sneak preview’ (3), mostly aimed at a family audience (28), but with a growing presence of those who are committed to adults or young adults (15).

France leads the selection with 21 productions, followed by Spain (9) and by Germany, Denmark, Germany, Romania and Italy, with three each, and the total budget for all projects amounts to 297 million euros.