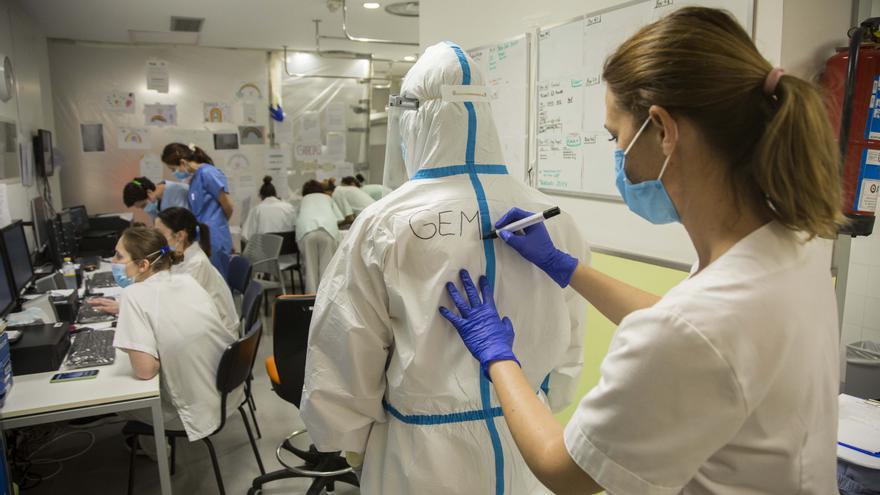 The number of active coronavirus outbreaks in Cantabria continues to grow and there are already 30 outbreaks detected by the Ministry of Health, apart from another six in the homes for the elderly in the autonomous community hit by COVID, which have remained stable since last week , with a single case each. And among these new outbreaks detected, the one that has been located in the last hours in the Pediatric Service of the Marqués de Valdecilla University Hospital, in Santander, which has affected six doctors who are already in isolation and away from the health activity.

“I have to emphasize that the cases are increasing considerably, and unfortunately, the cases among health personnel. In fact, at this moment we have an outbreak in the Pediatric Service of the Marqués de Valdecilla University Hospital that affects six doctors. And I have to insist on this issue also because among the medical staff, the cases are occurring in the younger staff, that is, in the residents. Therefore, I have to reiterate the need for these staff, who have made an enormous effort, as well as the personnel of the socio-sanitary field, has to be especially careful with the hygiene measures in their private sphere “, explained the Minister of Health, Miguel Rodríguez (PSOE), in an appearance before the media to detail the data on the evolution of the pandemic in Cantabria.

Regarding this outbreak that affects the Valdecilla staff, the political head of the Ministry has reiterated that “the protocols are very well established, so that the moment a health professional tests positive or is suspicious, they are immediately withdrawn from healthcare activity “. In this sense, it has confirmed that these six affected people are in Pediatrics are “retired”, four of them with positives and two who still do not have the result of the PCR but as a precaution they are already separated from their activity.

“It only affects physicians, not another health category, and what the rest of the staff who have been in contact with them have to do is isolate themselves at the slightest symptom and separate themselves from healthcare activity,” said the counselor, who has recognized that throughout the day it is “likely” the hospitalization of a child with coronavirus, at a time when only a newborn who has been in the ward since last week remains hospitalized “as a precaution”.

Regarding the daily balance of the epidemic in Cantabria, the head of the Ministry of Health has notified that in the last hours there have been 58 new positive coronavirus, 48 ​​on Sunday and 10 this Monday morning, which increase to 639 active cases. Of these, there are 614 in home quarantine and 25 are hospitalized, one in the Intensive Care Unit (ICU). This is a patient who was plagued and has worsened throughout the weekend.

Most of the outbreaks that are known so far -28 of the total- are of less than ten people and almost all are related to social and family gatherings, which the counselor has asked “to avoid as much as possible.” To these outbreaks we must add the six positives detected in as many in nursing homes, one in each, centers in which there has been no news regarding the number of infected.

“I would highlight that of those admitted at this time, more than 10 are people over 75 years old. It leads me once again to insist on the need for social distancing and care when we are in contact with older people, because it is clear that they are the most vulnerable and those who end up in the hospital, “Rodríguez lamented.

Slight drop in temperatures for this Saturday in the Canary Islands