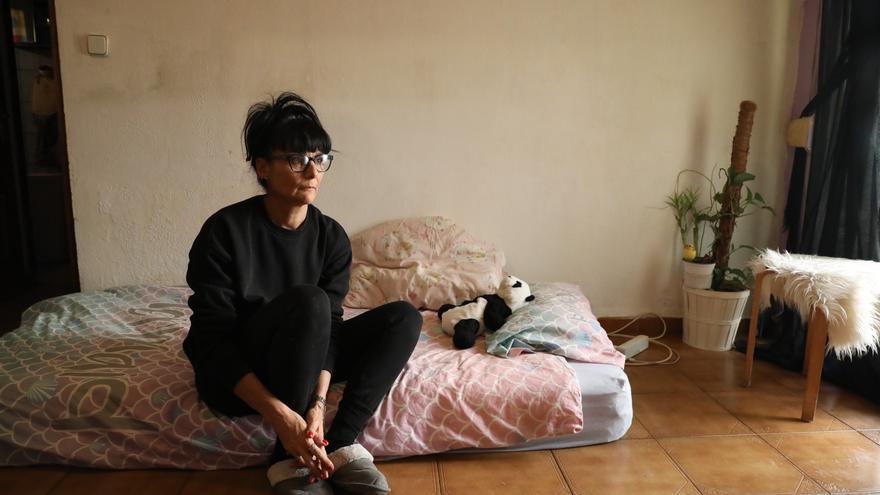 Tranquility reigned on the morning of Friday, November 12, on Sacrificio street in the Vicálvaro neighborhood, where Carmen Arroyo has lived for seven years. Next to her were half a dozen activists from the Vallekas PAH who had come at daybreak to tuck her in, facing the possibility that the judicial commission would appear to execute her eviction after Bankia, the entity rescued with public money in the worst of the 2008 crisis and owner of the house, sold it to a real estate company that since then has done everything possible to evict the woman.

According to the platform’s lawyers, the court where his case is being processed had agreed to stop the launch but did not have official confirmation. At twelve noon, they breathed easy. The danger seems to have passed. “For now”, clarifies Carmen, little convinced that her anxiety will end. In fact, neither she nor the PAH members who accompanied her lowered their guard and remained inside the house all morning on alert. “Sometimes the police arrive without knowing that the eviction has stopped,” they explain.

Carmen is from Madrid and is 46 years old, a 14-year-old son and a 7-year-old granddaughter, the result of a relationship that her other daughter had as a teenager who, after leaving home, left her in her care. As he explains, there was a time when he was working in nursing homes and providing home help to the elderly, but years ago he was unemployed. Now he is charging a minimum vital income of 650 euros per month. Carmen recounts an impossible life: “With my son, who until recently needed my care due to a misdiagnosed illness, and the granddaughter in my charge …”. This summer, in addition, she herself was operated on for a breast tumor that has begun to be treated with radiotherapy.

And this month he had an operation to remove his gallbladder, after suffering numerous colic. While recounting the vicissitudes she has gone through, her dog, Yako, a pit bull over 12 years old whom Carmen rescued “half dead, near here, tied to a street lamp”, does not stop following her around the house giving her samples of affection. “He had been beaten up. I took him away without hesitation and we cured him.” Since then, it is his shadow.

As it is a weekday, her son is in high school and the little girl is in school. In the rooms there are bags on the floor with clothes from both of them and Carmen’s. “In case we have to get away,” he explains. The father of her son died last August of colon cancer. “It didn’t help me at all,” laments the woman. Nor can he count on the help of his family – mother and two brothers – because “they already have enough difficulties on their own.”

Carmen started living in that apartment in Vicálvaro seven years ago paying a rent of close to 300 euros to what she thought was its owner, a neighbor from the neighborhood who helped her when she had to leave another house in the same area. After a while, this supposed landlord stopped showing up to collect the monthly payments. Until he received a letter from Bankia notifying him that the property was owned by the entity and to announce that he had to leave. The woman then proposed to the bank to continue paying a social rent according to her income, but they did not accept it. On the contrary, the bank sold the house to a limited company called Artilleros Consulting / Look and Find, which is the one that later requested the launch. Since then, Carmen has waged a fight not to be kicked out of the apartment, which could lead to social services taking away her son and granddaughter. “They can’t leave me on the street with two children. I don’t know where my girl will end up if they evict me,” she says, anguished. “I only ask to pay a social rent and stay so I can recover and find a new job.”

On November 2, the activists called a rally in front of the headquarters of Artilleros Consulting to demand a solution for Carmen. That day, about fifty people occupied the offices of this real estate agency, to whose managers they delivered the Social Services papers certifying their situation of social vulnerability and the medical reports detailing the operation and its prognosis.

The representatives of Artilleros Consulting denied their demands, according to the PAH complaint. Given the situation, the group decided to summon the neighbors at the door of Carmen’s house to stop the eviction announced and set for last Friday, November 12, in order to continue demanding an alternative that prevents this woman and the two minors stay on the street.

The good news was that the launch was halted and therefore the concentration was called off. In spite of everything, a group of colleagues from the PAH of Vallekas, did not want to leave her alone, “just in case” and went to her house. The first battle has just been won. But the question is “until when”, both Carmen and the members of the Platform who continue to assist and help these vulnerable people wonder.

Antonio Escobar, manager of the real estate agency Artilleros Consultind / Look and Find, located in the Moratalaz district, acknowledges that his company bought the apartment where Carmen Arroyo lives from a Sareb investment fund -in which Bankia participates- “without knowing that it was inhabited, “which is why he assures that they filed” a lawsuit against Bankia “for not warning them. “We try to negotiate with them, because this woman has a partner,” says Escobar. “We offered them money to leave since I need that apartment for a daughter of mine. But they did not accept,” he continues.

“We have tried several times to talk to Carmen but there is no way … she gets hysterical and once she told us she was going to call the police.” “In one of these conversations it is true that he told us that he wanted to pay a social rent of one hundred euros, but we are a small private company and we do not have to fix a rent of that type,” adds the manager.

In addition, he denounces that his company and his workers are suffering “harassment” on social networks as a result of the PAH activists holding that rally and “planted themselves at the headquarters issuing threats and insults, intimidating us all.” “Because of all this we had to close the real estate for a week and some of the employees say they are afraid of going through that drink again,” he says.

Carmen’s drama is one of the many that families and people in especially delicate situations suffer every day, despite the extraordinary decree of the Government with urgent measures approved in March of last year, which has not managed to paralyze these evictions even during the pandemic.

The reality is well known by the platforms and the housing unions, which for months have been warning that the figures were not reducing and that banks, investment funds, real estate, large holders and even public housing companies continued to denounce vulnerable families and trying to expel them from their home, ignoring the wording of the text of the decree or sneaking through its cracks. A reality of which the former minister responsible for Transport, Mobility and Urban Agenda, José Luis Ábalos, said he was surprised when asked in a press conference that he starred in a year ago. The image of a family -Adoración, his son, his daughter-in-law and his four minor grandchildren evicted in Carabanchel- “impacted” the already former head of that department, who said: “Logically, the government decree does not allow evictions.” However, they continue to be done.

The decree has just been extended again by the Government and validated by Congress so that it is valid until February 28. But it will only affect cases in which the owners of the properties are administrations or large holders. In this case, those affected by the threat of launches without a housing solution may request extraordinary extensions of six months in the payment and the moratorium on the payment of the rent. In addition, it includes compensation for owners.

The PP, Vox and Ciudadanos voted against this extension. The far-right party of Santiago Abascal has even appealed it to the Constitutional Court. The general secretary of the parliamentary group, Macarena Olona, ​​described the norm as “an authentic legal savagery” because, in the opinion of her party, it “legalizes the criminal occupation.” As he qualified in his Twitter profile, what they are against is “squatters who have entered a house committing a crime of trespassing or encroaching on a home”, something that the law already contemplates and punishes.