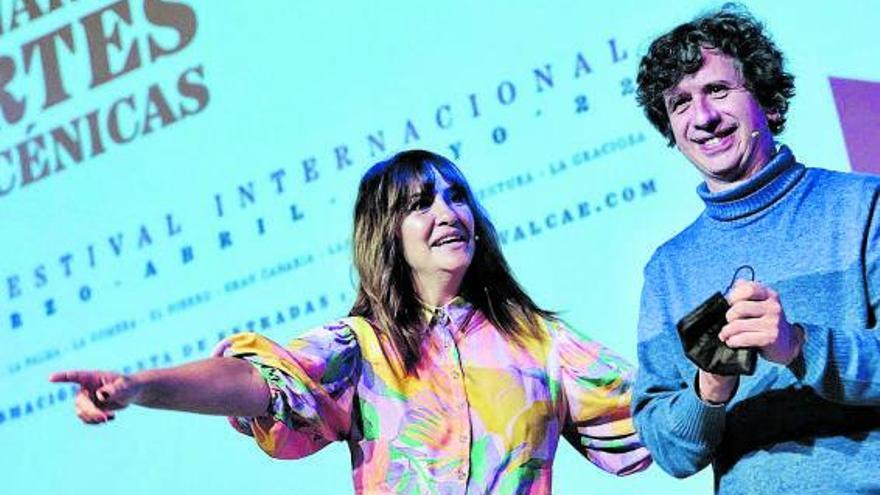 The fifth edition of Canary Islands International Performing Arts Festival (CAE) will fulfill this 2022 with one of the objectives that had been proposed since its birth: to reach the eight islands of the Archipelago with its programming. Conceived with the aim of creating new audiences for the performing arts in the Canary Islands, it will take place from this Thursday, February 17, to May 21. There will be a total of 23 activities in theater venues and public spaces in Tenerife, Lanzarote, La Palma, Gran Canaria, La Gomera, El Hierro, Fuerteventura and La Graciosa.

The program starts tomorrow with the first of the traditional CAE Meetings, which each edition bring together professionals linked to the performing arts for a talk on the situation of the sector. Today, starting at 8:00 p.m., the CajaCanarias Cultural Space in Santa Cruz de Tenerife will bring together the actors Gabino Diego Y Melanie Olivares. Tickets to attend the meeting - which will be moderated by the theater director and artistic manager of the CAE, Cuckoo Afonso– are available for five euros at www.cajacanarias.com.

The two actors attended this Wednesday the presentation of the CAE agenda and agreed to highlight the good work of a meeting that is sponsored by two private entities: the CajaCanarias Foundation and the La Caixa Foundation. "When Cuco Afonso called me, the truth is that I didn't think twice," explained Diego. “He is one of the best theater directors I have ever worked with. Thank you all for supporting this festival, culture and theater." For his part, Olivares echoed a similar message: "For private companies to get involved in the theater, to promote it and bring it to life, in some cases reaching where the administration does not, gives us the opportunity to be able to reach many more places.

Margaret Ramospresident of the CajaCanarias Foundation, and Mauricio Gonzalez, delegate in the Canary Islands of the Fundación la Caixa, acted as masters of ceremonies for the presentation of the 2022 program. Both insisted that the planned deployment throughout the Islands would not be possible without the collaboration of the different local institutions. Representatives from several of the municipalities and councils that will make this broad geographic coverage possible were at the meeting yesterday. For his part, Cuco Afonso was in charge of giving an account of the details of the program.

The first theatrical appointment of CAE 2022 will be on March 9 at the CICCA in Las Palmas de Gran Canarias. The actor Rafael Alvarez The Wizardwhich was already at a CAE Meeting in 2021, returns to the contest with The soul of Valle Inclan. It can then be seen at the Municipal Theater in Tías (Lanzarote), at the Training and Congress Center in Puerto del Rosario (Fuerteventura), at the Guimerá Theater and at the Pedro García Cabrera Culture Center in Vallehermoso (La Gomera) on the 10th. , March 11, 12 and 13 at 8:00 p.m., respectively.

The next date marked in red by the CAE will be April 9. The Santacrucero Guimerá Theater will receive the piece A deer in the headlightsthe latest creation of the French-Canadian company Cirque Le Roux. It is a tribute to cinema, the circus and a reflection on the human condition.

Then, on March 22, 24 and 26, respectively, the Teatro Leal, the Training and Conference Center of Puerto del Rosario and the Initiatives Center of La Caja de Canarias (Las Palmas de Gran Canaria) will receive performances by Attract Bile. This play is produced by the distributor Dos Hermanas Catorce and stars Nuria González, Maite Sandoval, Paloma García-Consuegra and Celia Morán. Other old acquaintances of the CAE are Plexus Polaire. If they already represented their Cendres in 2018, this time they arrive with dracula. The dates chosen for them are April 19 (Teatro Leal), April 21 (CICCA Cultural Center) and April 23 (Municipal Theater of Tías).

The last of the CAE appointments will be those starring smashed 2 of the Gandini Juggling company. He will visit the Campo de Lucha de La Frontera (May 17), Santa Cruz de La Palma (May 19) and La Graciosa (May 21). Likewise, and fulfilling its purpose of attracting new audiences, free activities have been organized for educational centers by the company Barjo&Cie and his Bas les pattes (hands off). They will be in Fuerteventura, Lanzarote, Tenerife and Las Palmas de Gran Canaria throughout the month of March.