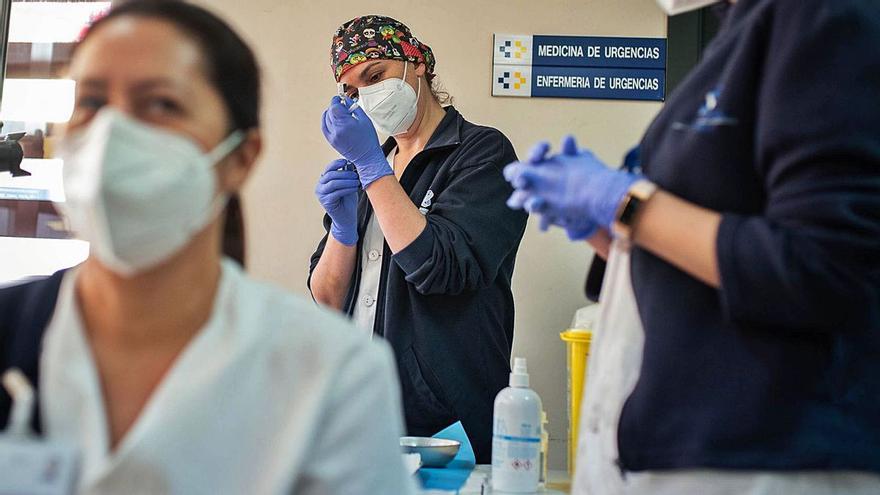 The Canary Islands have managed to vaccinate twice as fast as just a week ago. At the moment, some of the coronavirus vaccines are being inoculated in the Islands at an average rate of 4,000 daily vaccinations, compared to the 2,000 that were being given in mid-February, as confirmed in the reports of the Ministry of Health. During the weekend, the Canary Islands have inoculated 7,563 vaccines, which means that they have injected a total of 146,120.

This increase was mainly enabled by the arrival of AstraZeneca to Spain. Due to the therapeutic regimen of this vaccine – of which The Canary Islands have received a total of 37,100 doses-, for which it is not possible to inject people over 55 years of age, the autonomous communities have been able to start vaccinating other population groups, such as essential workers. But it is not the only thing that has influenced this increase in speed. The completion of vaccination in the most dependent population groups –house users–, as well as the beginning of inoculation in those over 65 who can easily approach health centers, has also improved the system’s ability to cope to this campaign.

The Ministry of Health of the Government of the Canary Islands yesterday registered 115 new cases of coronavirus, which raised the total accumulated cases in the Canary Islands to 40,840 with 5,486 active. By islands, Tenerife and Gran Canaria added 51 and 53 new positives, respectively. These increases denote that the sustained growth of the epidemic curve in Tenerife is maintained while its strength is relatively reduced in Gran Canaria. In this way, Tenerife has accumulated 460 cases in the last week, which is 16.7% more than the previous one; a slight increase compared to previous days. Regarding Gran Canaria, these last seven days add 500 cases, which represents an increase of 10.8% compared to the previous week. In turn, it represents a decrease with respect to the increase that had been reported in recent days. However, it should be noted that, after the weekend, the data tend to undergo variations that can break trends. Regarding the rest of the islands, the case of Fuerteventura stands out, which added 10 new cases yesterday. La Palma, meanwhile, registered a new one. El Hierro and La Gomera remain without adding new cases and Lanzarote, for the first time in more than two months, did not add a new case to its statistics.

Yesterday there was a new increase in hospitalized in the Islands. Of the six new admissions, four were produced in Tenerife and Gran Canaria. There are currently 364 people hospitalized with coronavirus in the Canary Islands, of which 81 are in critical condition and 283 remain hospitalized in an acute bed. By islands, Tenerife has once again surpassed Gran Canaria in the number of people who remain hospitalized, reaching 167 yesterday, a figure that had not been recorded since February 6. Of the total, 28 are hospitalized in the ICU and 139 in the ward. Gran Canaria, despite having a smaller total number of hospitalized patients (161), has more of them admitted to the ICU, a total of 36. With regard to Lanzarote, yesterday 29 people were hospitalized, of which 14 are in the critical unit. La Gomera and La Palma have 3 admissions each in their hospitals, however those on La Palma are more serious, since all of them are in critical condition. In Lanzarote a person entered since last Sunday who remains in the plant.

Yesterday there was also the death of three people in Gran Canaria, a 92-year-old woman and two 79 and 74-year-old men. The two oldest deceased remained in long-term hospitalization and are associated with the outbreak at Hospital San José, in Gran Canaria. The other deceased is associated with a family outbreak, suffered from previous pathologies, was admitted and had experienced clinical worsening. The February balance shows that 62 people in the Archipelago have lost their lives due to the coronavirus. Since the beginning of the year, 181 people have done it.

The number of administered vaccines grows by 19% in a week

EuroMillions: results of the draw for Friday, April 16, 2021