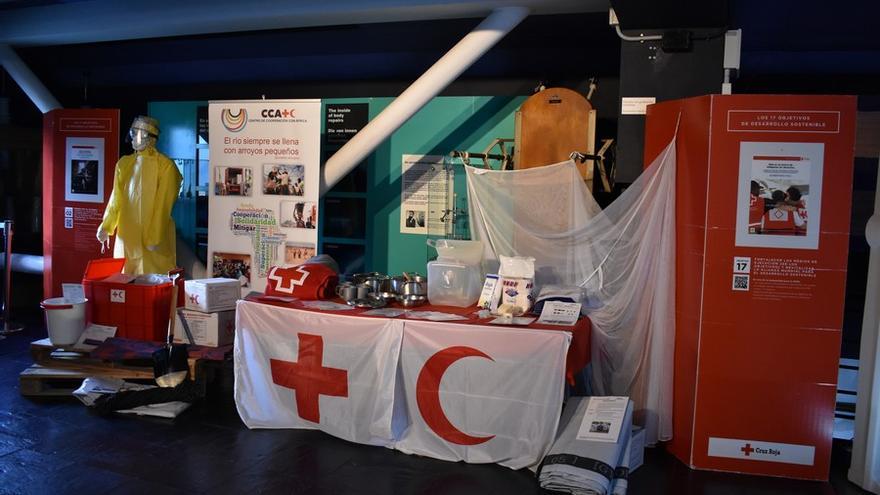 A total of 63 public administrations of the Canary Islands collaborate in the celebration of World Red Cross and Crescent Day, which will take place tomorrow, May 8, under the motto From society, for society. Red Cross on Canary Islands has launched an initiative to make visible and commemorate this important date, in recognition of the humanitarian work of the volunteers and the organization's workforce in the Archipelago, whom it congratulates.

In addition, in Las Palmas de Gran Canaria you can visit from today until Sunday May 9, the exhibition of resources and projects that the Red Cross exhibits thanks to the generous collaboration of the Elder Museum of Science and Technology. Admission is free for all volunteers and members of the Red Cross and all those who acquire a ticket for the entity's Gold Draw.

The NGO has more than 16,000 volunteers and 1,248 people hired in the Canary Islands

The NGO appreciates the involvement of the institutions, which “represent a demonstration of support and recognition, as well as a motivation for the more than 16,000 volunteers and 1,248 people contracted throughout the Archipelago, after the difficulties experienced and the challenges they have had to face in the last year, where they have dedicated their time, commitment and humanitarian work to be able to be close to people who suffer, save lives, help the most disadvantaged and change mentalities ”.

Municipalities such as those of Arrecife and Tías have raised this Friday the large Red Cross flags that they have received from the president of the organization in Lanzarote, Tamar Luis. Arrecife shows it on a pole located in front of the town hall and Tías in her own building. The municipal representatives highlighted the work of the NGO on the island and Luis showed his willingness to continue with the work of the volunteers and workers.

The Red Cross represents the largest humanitarian, citizen and independent movement in the world that leads 156 years collaborating with public and private entities so that humanity and dignity reach all people in any place and at all times and circumstances, always acting under its seven Fundamental Principles: Humanity, Impartiality, Neutrality, Independence, Voluntary Character, Unity and Universality.

The celebration of World Red Cross and Crescent Day takes place during the largest operation in the history of the Spanish Red Cross, the Red Cross Plan Responds to the Covid-19, through which it has already supported more than 165,000 vulnerable people in the Canary Islands and 4 million throughout the country, impacted in one way or another by the pandemic, and more than 700 million people around the world through the Movement International Red Cross and Red Crescent.

The coronavirus pandemic has meant the largest mobilization of resources, capacities and people in the history of the Red Cross

Last Wednesday, Queen Letizia presided over the central act of the celebration of World Red Cross and Red Crescent Day in Madrid, where the 2020 Gold Medals were awarded, whose delivery had to be postponed due to the pandemic. They fell to Adela Cortina, Azamat Baialinov, Dr. Pedro Cavadas, the Raices Foundation and Concha Velasco for their effort, solidarity and social commitment. The Plaque of Honor 2021 went to the Red Cross and Red Crescent volunteers.

The International Red Cross and Red Crescent Movement is present in 192 countries and more than 12 million active volunteers comprise it. In Spain there are more than 250,000 Spanish Red Cross volunteers, of which more than 68,000 have made the Red Cross Respond Plan possible.

Since the beginning of the Covid-19 crisis, the Red Cross and Red Crescent have acted in all affected countries of the world, representing the largest mobilization of resources, capacities and people in their history in favor of the most vulnerable people and the general population.

Volunteers are in the first line of response, reaching people and communities in situations of vulnerability and greater risk, supporting the health and social systems and carrying out awareness-raising and communication activities. It is a 'global local' response, on an unprecedented scale, showing the solidarity of the Red Cross and Red Crescent network which, so far, has already helped more than 700 million people.