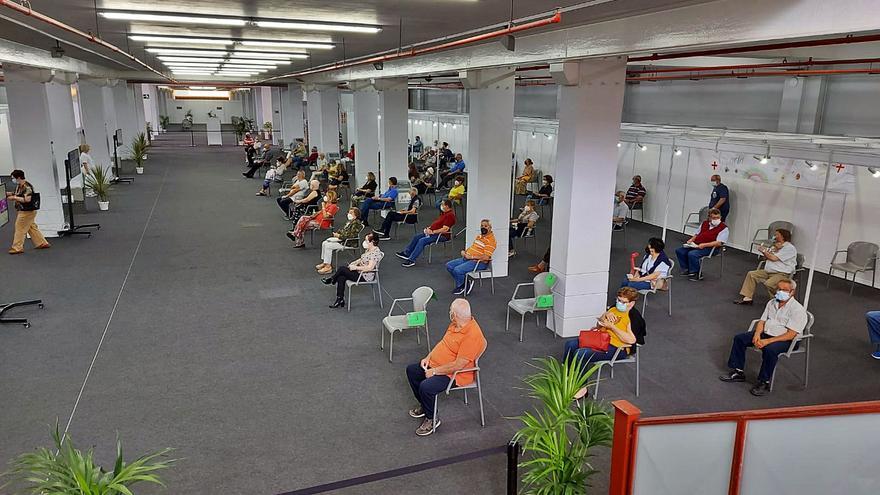 As of last Thursday, 175,941 people had already received the complete vaccination schedule in the Islands. That is, 9.40% percent of the target population is immunized against SARS-CoV-2 –1,871,033 citizens–. A figure that places the Canary Islands as the ninth autonomous community with the highest number of people inoculated with the two doses. The vaccine administration process continues on a daily basis in the region where 131 new cases of coronavirus were notified yesterday. With them, the general count of the Canary Islands rises to 52,721 infections since the start of the pandemic.

However, in the Archipelago there are 3,496 people still affected by the pathogen. Most of them, 1,195, are located in Santa Cruz de Tenerife, which means that 34.18% of the total number of people infected in the region are found in the municipality. It is followed by the capital of Gran Canaria with 895 active cases –25.6% of the global figure registered in the autonomous community–.

Most of the sick citizens, specifically 3,177, recover in their homes where they are isolated according to the health protocol, and where they receive the necessary medical follow-up. Despite this, 319 people remain in island hospitals due to complications caused by Covid-19. Of these, 72 are in intensive care units –39 in Gran Canaria, 30 in Tenerife, two in La Palma and one in Lanzarote–; while 247 are on the hospital floor.

In contrast, a total of 48,496 people have overcome the disease, after 47 patients were discharged in the last 24 hours. In addition, for the first time since April 19, the Canary Islands did not count any deaths from the virus, so it closes the month of April with 56 deaths - the lowest number so far this year - and the total number continues at 729.

Regarding the 131 new infections, 83 of them have been detected in Tenerife, where 22,747 positive coronavirus diagnoses have already accumulated. Until yesterday, most of the people still affected by Covid-19 were counted on the island, since it has 2,268 in its territory - 64.8% of the total in the region.

In Gran Canaria, there are 992 epidemiologically active cases, after the Island added another 39 coronavirus infections in the last 24 hours, according to the Ministry of Health reported last day. This means that, since the start of the pandemic, there have been 21,640 cases of the disease.

Lanzarote, for its part, registered six new positive diagnoses that raise the overall figure to 4,962. On the island, there are 126 citizens still affected by the pathogen. In Fuerteventura, assets remain at 52, since the territory did not add any contagion the previous day. This means that the accumulated figures remain at 2,256.

Similarly, on La Palma no new cases of coronavirus were detected either, so the island continues with a total of 531 since the start of the pandemic. There, the tables in progress are 34. The general count of El Hierro rose yesterday to 531 positive diagnoses, after detecting another three cases in the last 24 hours. Finally, La Gomera, which did not increase its number of infections, has 228 accumulated and one epidemiologically active in its island territory.

Until last day, a total of 1,054,221 PCR tests had been carried out in the Canary Islands, of which 2,832 correspond to Friday. According to the data updated by Health, of the total number of tests carried out, 56,221 have had a positive result - which translates into 5.33% positivity. On the other hand, the cumulative incidence at seven days in the Islands stands at 44.81 cases per 100,000 inhabitants and at 14 in 103.17 cases by the same population count.

As reported last Friday by the Ministry of Education of the Government of the Canary Islands, the non-university education groups quarantined by Covid-19 in the Archipelago account for 0.4%. That is, of the 17,000 bubble groups existing in public, subsidized and private centers in the Islands, a total of 67 are in confinement when registering a positive for coronavirus among teachers or students. Since the beginning of the school year, the percentages of isolated groups in the Canary Islands have ranged between 0.02 and 0.4%. Until two days ago, there were 50 active cases among teachers in the region, out of more than 32,000 teachers; and those of male and female students total 379, of more than 330,000 minors enrolled in the autonomous community.