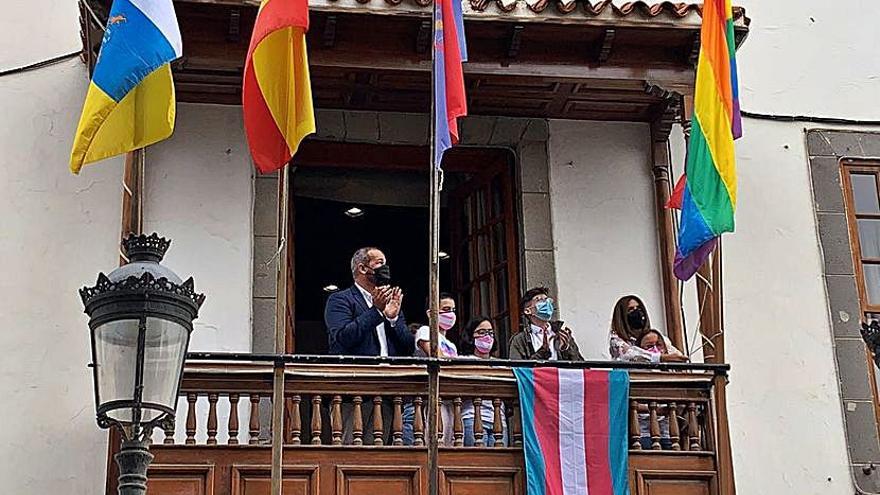 A fight that was joined by Las Palmas de Gran Canaria, whose López Socas Sports Complex became yesterday a place of homage to the movement and its trajectory since the Franco dictatorship. And it is that the space became the meeting point for the realization of numerous acts between 1979 and 1980 by the Collective of Gay Men and Women of the Canary Islands that was born shortly before, in the mid-70s. the active fight for the rights of the LGTBI + community in the island territory.

As a tribute, yesterday a plaque was discovered in the capital in the sports enclave in which it can be read: «In commemoration of the first LGTBI Pride celebrations in Gran Canaria. The first public rally was held here on June 23, 1979, convened by the Homosexual Men and Women Collective. It is an initiative promoted and financed by the City Council of Las Palmas de Gran Canaria and is part of the project Strategy for the Historical Memory of sexual and gender dissidence in the Canary Islands of the General Directorate of Diversity of the regional Executive, which promotes the significance of places and monuments in various emblematic places of the Archipelago.

The monolith also includes a QR code that links to the Canary Islands Government's historical memory website, which explains the reasons that justify this historical relevance. Yesterday's is the second distinction of its kind to be awarded in the city. The first was put on in the Santa Catalina park on May 17th on the occasion of the International Day against LGTBIphobia.

Another historical moment was lived yesterday in Santa María de Guía where the mural that pays tribute to the transformer from Guie, Xayo, who died on March 24, was inaugurated. The work is on the side façade of a building located in front of the Plaza Beata Sor Lorenza Díaz Bolaños, in the artist's hometown, San Roque. The event was attended by the Deputy Minister for Equality and Diversity, Sylvia Jaén, and the mayor of the municipality, Pedro Rodríguez.

On the other hand, the Telde City Council launched its first campaign to commemorate the International LGTBI + Pride Day, which was celebrated under the slogan Much to celebrate. Telde Orgullo LGTBI + 2021. In addition, to the raising of the flags of LGTBI + Pride and Trans in the Town Halls, which will wave there throughout the week in support of these groups, the Town Hall plans to carry out events such as training activities for the entire citizenship under the title Let's talk about what is not spoken: Affective Sexual Diversity, which took place at the Saulo Torón Library, taught by representatives of the Gamá collective.

In the same way, it developed Canarias Orgullosa, a visibility initiative in which the LGTBI + Pride flag will be projected on the Melenara Beach dock and in the new municipal office building in El Cubillo. In Vasequillo they were also 'painted in color' with the placement of the rainbow flag on the façade of the Town Hall. An initiative that has also been carried out in Mogán, from whose balconies of the Town Hall hangs the colorful emblem.