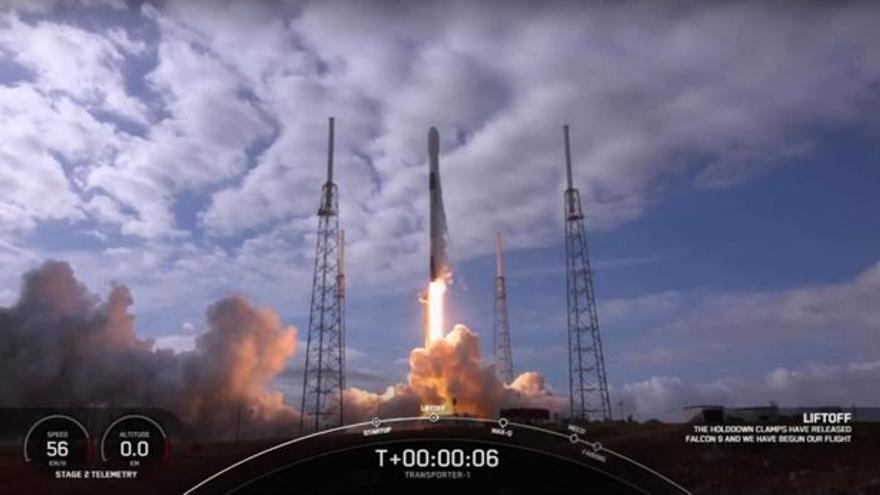 The DRAGO infrared camera for earth observation, developed by the IACTEC-Espacio team of the Instituto de Astrofísica de Canarias and integrated within the ION satellite of the Italian company D-Orbit (PULSE mission), has been successfully launched into space .

The Transporter-1 mission was able to take off without mishap early in the launch window, which began at 15:00 UTC, from platform 40 of the Cape Canaveral Space Force Station in Florida (USA), reported the IAC.

The launch had been postponed since Thursday due to unfavorable weather conditions.

For Rafael Rebolo, director of the IAC, “this technological desk will allow us to tackle in the short term, thanks to the planned funding from the Ministry of Science and Innovation, the construction at IACTEC of a higher performance microsatellite that will promote this technological sector in the Canary Islands”.

DRAGO (Demonstrator of Remote Analysis of Ground Observations), the first instrument developed entirely in IACTEC-Space, is a short-wave infrared space camera for observing the Earth.

Once in orbit and after commissioning the satellite and its instrumentation, DRAGO will be able to simultaneously obtain infrared images of the Earth at two wavelengths in the SWIR range (1.1 and 1.6 microns).

The camera also includes high-performance hardware and software for high-speed image acquisition (up to 160 fps).

This electronics enables on-board processing of images, including features like super resolution, compression, and encryption.

According to the IAC, with a weight of 1 kilogram and a consumption of 6 watts, comparable to a common led bulb, DRAGO is already a benchmark in the emerging “NewSpace” sector that shapes a new economy based on the so-called “democratization from space”.

For Álex Oscoz, principal researcher at IACTEC-Espacio, “the technical details of this camera, both in hardware and software, make it a pioneering development that will make a revolutionary tool available to the ‘New Space’ industry to obtain information infrared from space with minimal size, weight and energy consumption. ”

IACTEC will carry out the demonstration and validation operations in orbit in coordination with D-Orbit.

The camera will take infrared images of the Canary Islands and other parts of the planet to test their use in different Earth observation applications.

“Among the multiple applications of this technology, which allows to show phenomenology and physical properties not accessible in the visible, is contributing to achieve such important challenges today as the fight against forest fires or the protection of the environment against effects derived from climate change “, according to José Alonso, manager of IACTEC-Espacio.

One of the most important milestones achieved with DRAGO has been the integration of the instrument in a satellite platform such as ION.

For this, a “plug-and-play” approach has been used, incorporating the camera into a standardized CubeSat structure that connects to the electrical and data interface of the satellite carrier.

This system significantly reduces the time and cost required to prepare and fly a payload on a demonstration mission, and simplifies its operation.

“This approach to integration allowed us to obtain DRAGO approval as a hosted payload in record time”, explains Alfonso Ynigo, IACTEC-Espacio Systems Engineer.

DRAGO has required, before being put into orbit, conducting environmental tests to demonstrate its ability to withstand the harsh conditions of launch and outer space.

These tests were carried out at the facilities of the National Institute for Aerospace Technology (INTA) in Torrejón de Ardoz, Madrid, and at the Center for Aeronautical Technologies (CTA) in Álava.

DRAGO consolidates IACTEC-Espacio as a pioneer and multidisciplinary environment in the Canary Islands in the development of technological capabilities for its application in projects related to the use of payloads from small satellites and the processing of data for space observation.

IACTEC-Espacio is a program integrated in IACTEC, the IAC’s technological and business collaboration space, which has financial support – Training Program, under the TFINNOVA Program 2016-2021, of the Strategic Framework for Insular Development (MEDI) and of the Canary Islands Development Fund–, and of infrastructures (IACTEC building) of the Tenerife Island Council. EFE