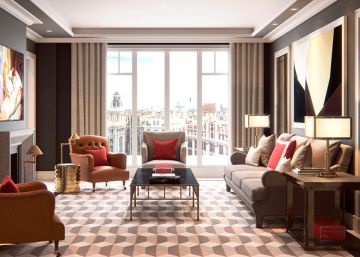 When OHL presented the Canalejas project more than five years ago, there were serious doubts about whether the most expensive luxury homes in Madrid could be sold next to Puerta del Sol. Time has proved the company right, which has created a new prime residential area beyond the Barrio de Salamanca, La Moraleja, El Viso or La Finca. Finally, the developer company Centro Canalejas Madrid has sold the 22 apartments in this development for more than 100 million euros, and with a record sale of an attic for 11 million. The bad news for the complex, however, comes from a new delay in the opening of its shopping arcade.

Centro Canalejas Madrid has sold these luxury homes under the Four Seasons Private Residences brand, linked to the five-star hotel chain that has also opened in the complex. The developer has entered 93.5 million for the 22 apartments, as recorded in its accounts for the year 2019 recently presented in the Mercantile Registry. If the 10% VAT corresponding to real estate transactions is added, the buyers have paid out 102.8 million in total.

This figure represents an average amount of 4.67 million per home (including VAT). The most expensive of all purchases has been that of one of the attics, for which 11 million has been paid (10 million plus taxes). The last two sales that have been closed in Canalejas correspond to the second most expensive home, which has reached the amount of 8.5 million (9.35 million with rates), and another of 3.2 million (3.52 million total). As detailed by the company in its accounts, that last operation was pending to pass the final process required by the money laundering regulations.

These amounts disbursed have also triggered the price paid in this project, which on average has reached 15,100 euros per square meter, according to market sources. In the case of the most expensive attic, that figure rises to 16,600 euros per m2, one of the highest prices paid for new construction in Madrid. In size, these residences range from 170 to 700 square meters built, the largest being one of the five penthouses. For the commercialization of these homes, Canalejas relied on the consulting firms Colliers International and Knight Frank.

The Canalejas project -between Calle de Alcalá, Sevilla and Puerta del Sol- started in 2012, when OHL acquired seven historic buildings and without use of the kilometer zero of Madrid that to a large extent belonged to old bank headquarters. He paid Santander 215 million for these properties, in which he planned a rehabilitation that includes the 22 apartments, a shopping arcade for luxury brands and restaurants and, finally, the first Four Seasons in Spain. This hotel chain also provides services to the homes sold, which benefit from restaurants, cleaning, babysitting and the figure of a residential director.

He has had to pay 5.6 million to repair the Metro line under the center

This complex is 50% owned by OHL and the Canadian-Israeli millionaire Mark Scheinberg, founder of Poker Stars, who entered the rehabilitation project in February 2017 through his partnership Mohari and paying 225 million.

The company had already delayed the opening of the shopping and restaurant area due to delays in the works, which were expected to open in July last year. But the arrival of the Covid-19 pandemic has once again delayed the inauguration, without a specific date defined. “Regarding the commercial gallery’s entry into operation, initially contemplated for the beginning of 2021, the new forecasts suggest that it will take place at the beginning of the second semester,” acknowledges the promoter in the subsequent events section of its 2019 accounts.

Likewise, the hotel has experienced delays in its opening due to the restrictions imposed by the state of alarm. Initially, the Canadian chain wanted to inaugurate its 200-room Madrid establishment in mid-May, but finally the date was postponed to September 25. Regarding the planned underground parking, it will not be ready until October or November.

Branch office. Centro Canalejas Madrid explains in its accounts that last summer it sold a commercial space in the complex to the German fund Warburg-HIH Invest Real Estate for 29 million euros. That space is leased, according to the company, to Santander, which will have a branch there, precisely in some buildings that have a banking origin.

Results. In 2019, when the complex was still under construction, the company did not make any income from the business and suffered losses of $ 6.3 million. The developer values ​​the complex at 550.9 million on that date, of which 215 million correspond to the appraisal of the land.

Meter. The works caused damage to the underground tunnel that passes under the complex, which caused the closure of line 2 of the Metro. The company had to take care of the repair, and as it recognizes for the first time, advancing 5.6 million to reinforce the tunnel and the cost of the interruption, although it assumes that its insurance will cover the cost.

Debt. The company has a 268 million syndicated loan with Santander and CaixaBank. Thanks to the residential sale operations, Centro Canalejas Madrid paid off a debt payment of 38.8 million in June of last year.