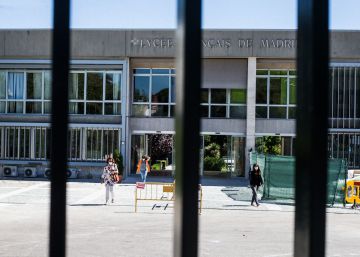 Going back to school is being a real headache for parents and teachers. The second wave of the coronavirus has started earlier than expected and the increase in infection rates is coinciding with the opening of schools. The institutions try to neutralize the fear of teachers and parents by taking measures and reviewing protocols. However, given the uncertainties generated, there are already those who have decided not to take their children to school for the moment despite the legal problems they may face.

The president of the Community of Madrid, Isabel Díaz Ayuso, stated in a recent interview that during the school year “it is likely that practically all children are infected.” A risk that, in some cases, should be less if the established prevention and safety measures are followed. Otherwise, the parents of an infected child could consider claiming the center, taking civil and even criminal actions, if there was absolute negligence. Also those that have suffered the collateral damage of a virus outbreak or outbreak. Consider that a close contact quarantine can disrupt a multitude of plans and lead to financial losses.

The lawyers warn that the possible responsibility of the schools or the educational administration in these cases is a very difficult question to prove. Traceability is limited and the institutions can oppose repairing the damages caused by alleging force majeure. This does not mean, however, that a lawsuit cannot succeed if it is conclusively proven that the health of the minors was put at risk by omitting the established measures (sanitation, use of masks, etc.).

When could it be claimed?

The fact that covid-19 is an extremely contagious virus, of which the scientific community still does not have complete knowledge, makes the ability to prevent contagions in the classroom very limited. This makes the cases in which damages can be claimed from the school are exceptional, say different expert lawyers in civil liability. Specifically, they are limited to cases in which the center has acted negligently, in breach of security protocols.

According to the lawyer Olalla Carballo, “not even all the measures adopted by law for its prevention ensure zero risk of transmission, so a possible positive in a school can occur with total independence from the diligence deployed by the center.” For this reason, the centers will normally be able to claim “force majeure”, and “any responsibility lapses in situations in which the result, although foreseeable, is inevitable”. Now, she adds, “a different matter is that the center does not comply with the disinfection, prevention and conditioning regulations that state and regional laws impose on them.”

Of the same opinion is Olatz Alberdi, partner of Aba Abogadas, who also sees possible a lawsuit if the covid regulations established by the center itself are breached. On the other hand, “if he demonstrates that he acted diligently, complying with the established norms, his responsibility could not be established.”

Are the liability waiver clauses legal?

In general, these documents are not valid if it is shown that the school did not comply with the regulations. As Asunción Santos, a lawyer for Legálitas points out, although “the signing of these clauses is becoming a common practice due to the fear of hypothetical lawsuits,” they should be carefully examined. “If it is proven that a school is clearly not complying with the established protocols and is not adopting the established precautions, it is difficult for it to be exempted from responsibility,” he says. Alberdi is of the same opinion, who explains that the signing of these clauses does not absolutely exonerate the school.

This practice, adds Carlota Zapata, also a lawyer for Legálitas, does not occur in public schools, except for canteen or extracurricular services run by private companies.

How to prove the fault of the center?

The first thing to keep in mind, explains Zapata, is that it will be very difficult to prove where the contagion has occurred. But if the parents consider that the contagion has been attributable to the center, they must collect evidence that shows that the established anticovid measures were omitted. For example, explains Alberdi, witnesses, mails, medical reports, etc., in which the negligence of the school in question is deduced.

Now, Carballo points out, proving the omission of the center’s obligations is a complicated matter if we take into account that the protocols “are full of vague concepts such as airing the classrooms often or frequent hand washing.” A different matter, he points out, would be if the center had incorporated risk coexistence rules, prohibiting access to it with a mask, for example. In this case, he says, it would be easier to demonstrate responsibility and discuss the inevitability of the contagion.

What if it is a public school?

In this case, a complaint would have to be made to the corresponding education department of the autonomous community in question. Although, in any case, Zapata advises, “if it is intended to initiate a procedure of patrimonial responsibility, it is recommended to raise it first in writing in the center.”

As the lawyer explains, it would be necessary to prove the specific damage suffered by the contagion and that this is “directly attributable to the action or inactivity of the administration.” In other words, “it was the measures taken by the center or the counseling that have caused the regrowth”. A complicated issue considering that it is an exceptional situation without precedent, so that “the administration may claim force majeure.”

If, despite these difficulties, you want to claim compensation for the damage caused, the claiming parent will have to quantify it based on the material damage, the days of damage and the consequences.

Can you sue other parents?

Parents may be responsible for the contagion or outbreak. If it is proven that the parents, knowing that their child is infected, take her to school, they may face a lawsuit, although this negligence will have to be proven. In this case, Santos points out, it would even be possible to file a criminal complaint. Alberdi is of the same opinion, adding that, in these cases, the center must prohibit the entry of the minor if, for example, it detects that they have a fever at the entrance.