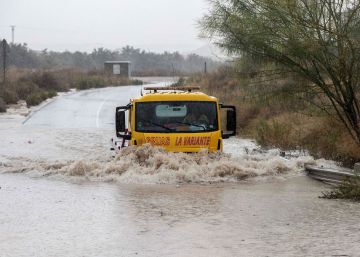 Heavy rains and floods they are seriously affecting the southeast of the country. In many locations, the authorities are recommending citizens not to leave their homes. In fact, a good number of schools have canceled the classes due to the risk involved in the transfer of the children or Fearing that children get trapped in schools. Faced with a situation like the current one, it is logical that many workers ask themselves if they are obliged to go to their company or, if they are already there, if they can stop their tasks to go home.

If they are already in the workplace

The second issue is expressly provided in the Occupational Risk Prevention Law (LPRL). Article 21 of the same provides that when workers are or may be exposed to a "serious and imminent risk on the occasion of their work", the employer must inform of such danger as soon as possible and take the necessary protection measures. It is even possible to "interrupt your activity and, if necessary, leave the workplace immediately." In these circumstances, the law prohibits the company from requiring workers to resume their activity "as long as the danger persists, unless there is a duly justified exception for safety reasons."

But not only depends on the employer that the employee can leave his job. In case the company does not take measures, the law contemplates two other ways. The first is that the worker, by himself, has the right to interrupt his activity and leave his post if he perceives that continuing it entails a "serious and imminent risk to his life or health." The decision can also be made by workers' representatives by a majority of their members. In this case, the agreement must be communicated immediately to the company and the labor authority.

In these cases, the LPRL expressly prohibits any reprisals against workers or their representatives arising from such decisions, "unless they had acted in bad faith or committed gross negligence."

As defined in article 4.4 of the norm, a serious and imminent occupational risk must be understood as "one that is rationally probable that it will materialize in the immediate future and may entail serious damage to the health of workers". In this case, and given that the level of alert is communicated by the public authorities themselves, the workers already have an external source that certifies the certainty about the danger.

If the employer tries to prevent workers from being safe, either by action or omission, he will be committing a very serious offense, as defined in article 13 of the Law on Offenses and Sanctions in the Social Order. This type of behavior is fined, depending on the seriousness of the facts, with between 6,251 euros and 187,515 euros.

In this sense, as explained by the labor lawyer Juan Antonio Salmerón, although the law presumes legitimate business orders, the duty of obedience of the employee has its limit in the prevention of occupational hazards.

When he is still at home

Less obvious is the answer if the worker is not yet in the workplace. That is, if, for example, you are at home and you must decide if you take the car to go to your office. In these circumstances, Salmerón believes that the worker's absence will be completely justified. "This assumption is not included in the law, but with all the authorities recommending that you should not drive by car except in extreme need, in a red alert situation and with many roads cut or flooded, it would be enough to prove on a case-by-case basis the inability to go to the job or that the journey involves a high risk, "says the lawyer.

Along these lines, the Supreme Court, in 2009, refused to sanction a teacher who did not go to her school for the poor state of the roads due to a heavy snowfall. The Ministry of Education of Castilla-La Mancha had agreed to reduce their salary for "unexcused absence", however, the magistrates annulled this decision because they considered that the employee did not have to assume the "obvious danger to her physical integrity" that it entailed taking the car, and even if there was no road cut.

The fact that the absence is or is not justified is relevant so that it does not count for the purpose of disciplinary dismissal or any other sanction within the company. That is, as Salmerón affects, if by joining with other faults the company decides to act against the worker, he could defend before the courts that those that had to do with rainy days should not be taken into consideration.

Is it charged for the days of absence?

Although the absence is considered justified, Salmerón says that, in his opinion, companies may not pay the day or days when the worker does not attend work, “unless otherwise stated in the collective agreement. Thus, the employee can see the corresponding amount discounted from his payroll while not going to work or he can be urged to recover the hours on other days. As explained by the lawyer, this is covered by article 30 of the Statute of Workers (ET), which determines that the worker retains his right to salary even if he does not go to his job, provided that such absence is attributable to the employer.