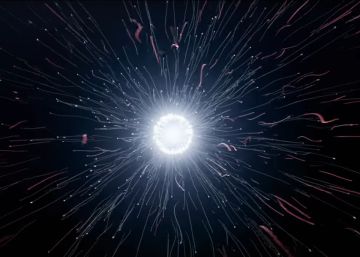 The answer to the question is negative. If the conception of the universe were that it is infinite, that it has no boundaries, as the metaphysicians thought, then the answer would be: yes, any point in the universe can be considered the center of that universe.

The notion of center is related to the distance and also with the edge or border. A point is the center of a system if it is the same distance from all points of what is considered the edge. To get an idea, let's think of a sphere, a compact wooden ball, for example. The edge is formed by the surface of that sphere, it is what we can touch, and there is a point inside that ball that is the same distance from any point on the edge. That is the center of the sphere. If the surface of that sphere expanded to infinity, and we thought of the new edge, which now would not be such, infinitely far away, all points of the new "infinite sphere" would be the same distance from that supposed edge: at a infinite distance; This is the reason why all the points could be considered the center, with that definition that we have given as the center, and that is why the answer would be: yes, with the previous conception of a universe infinite.

However, it is currently thought that the universe is finite, although it is also true that it is believed to be in continuous expansion. Being finite, any point cannot be the center, as with the compact wooden ball, but assuming it is permanently expanding, it is not easy to find its center. If it existed (think, for example, on a sheet of paper; we could talk about a center of mass, which is a physical concept, but there is no center on that sheet in terms of equidistance because no point is the same distance from the edges – except if the sheet were a circle-). Thus, any point cannot be considered the center of the universe, according to our current conception of it.

Also when talking about distance we are implicitly thinking of a reference system. The International Celestial Reference System (ICRS) is the current standard, adopted by the International Astronomy Union (IAU). Its origin is located in the barycenter of Solar system and it is composed of 212 quasars far away that are practically fixed points, given their remoteness. Quasars are very powerful sources of radiation and consist of a supermassive black hole surrounded by a cloud of gas that, when rushing into the black hole, emits energy in the form of an electromagnetic field.

It was the math Emmy Noether who found the meaning of General Relativity: the conservation of energy is in connection with symmetry

Give the coordinates of a place on the surface of the Earth It involves using a reference system. If we add a fourth coordinate to the location coordinates for time, we will have the reference system that the mathematician Hermann Minkowski devised to represent the relativity of space and time, discovered by Einstein, which can be understood by a simple experiment using the Theorem Pythagoras, and that has as a consequence that the time for those who observe from within a moving system is different from the time for those who do so from outside the system.

Mathematics and physics are closely connected, not only thanks to the Pythagorean Theorem, as we have mentioned. In 1912 Einstein struggled to achieve the Theory of General Relativity, which came after hard work and after the participation of sophisticated mathematical technology, as he himself recognized. It was the math Emmy Noether who found the meaning of General Relativity: the conservation of energy is in connection with symmetry. His famous theorems on Relativity were presented in 1918. In this regard, Einstein would write to Hilbert: “I am impressed that someone can understand these matters from such a general point of view. It wouldn't hurt the old guard of Göttingen if he learned a couple of things from her. ”

Mercedes Siles Molina She is Professor of Algebra at the University of Malaga.

We respond It is a weekly scientific office, sponsored by the Dr. Antoni Esteve Foundation, which answers readers' questions about science and technology. They are scientists and technologists, partners of AMIT (Association of Women Researchers and Technologists), the ones that answer those questions. Send your questions to us@response@gmail.com or via Twitter #nosotrasrespondemos.