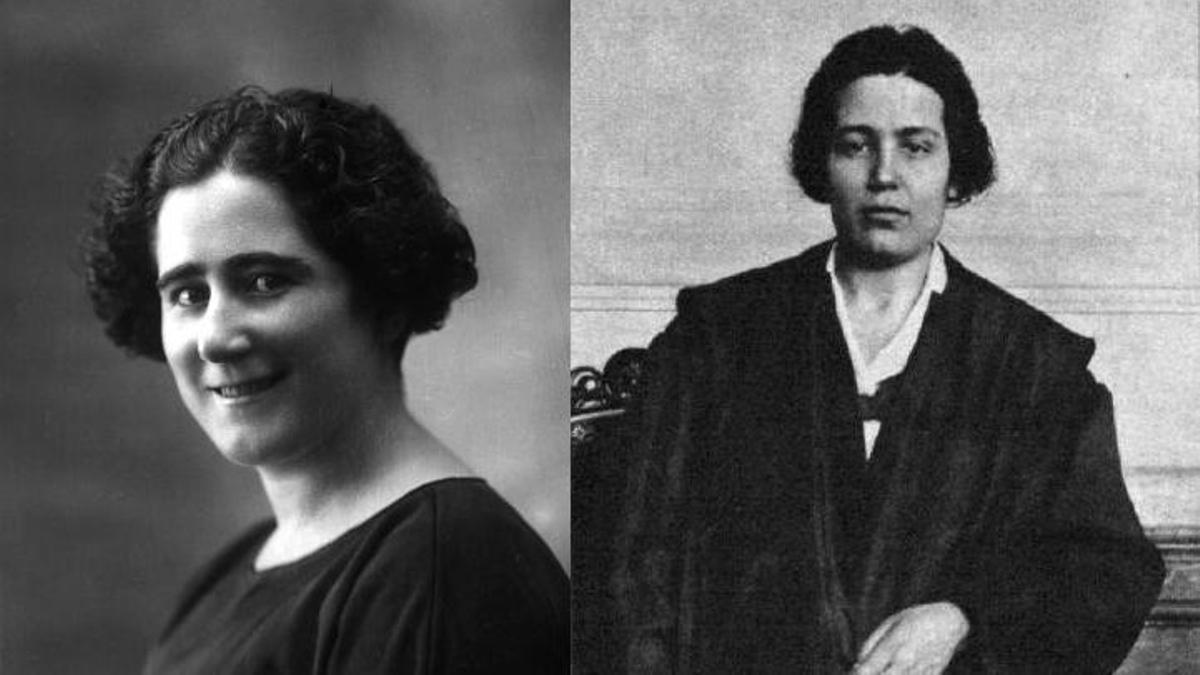 That autumn of 1931, the only two congressional deputies held different positions when it came to recognizing the vote of women in the Republican Constitution. While Clara Campoamor made a fiery and brilliant defense of women's suffrage as a fundamental right of half the population and managed to convince a majority of the House, Victoria Kent was in favor of postponing that decision in a context of hegemony of husbands and fathers and of influence of the conservative Catholic Church over the Spanish.

"We could say," says Isaías Lafuente, author of the book Clara Victoria (Planet) recently published, "that Campoamor argued that the Republic was impossible to be democratic without having half the population, while Kent prioritized criteria of political opportunity. In any case, that important debate revealed the division not only of the republican parties, but also of the Spanish political leaders who had opposing opinions. Suffice it to say that, along with many followers of Campoamor, Kent also had relevant support such as that of Margarita Nelken, later a PSOE deputy. In my book, in In short, I try to reflect the Spain of the time from that debate on the female vote without Manichaeism or falsehoods ".

A journalist for the SER network with extensive experience and a biographer of Clara Campoamor, this expert on the history of Spanish feminism was tired of the numerous manipulations and half-truths that circulate on social networks and in political circles about that debate of 90 years ago. Thus, it is convenient to remember a very relevant fact such as that the parties of those constituent Cortes of the Republic gave their deputies freedom to vote when approving or rejecting women's suffrage. In fact, the ideological blocs were fractured so that 161 deputies (mostly socialists, Basque and Catalan nationalists, the agrarian right and independent republicans) voted in favor of 121 against (especially radicals, radical-socialists and some small parties ). Curiously, the majority of deputies of the Radical Party in which Campoamor was a member voted against it, as did the radical-socialists of Victoria Kent.

"In recent years," says Lafuente, "the right wing of the PP, with Pablo Casado at the head, has tried to confuse arguing that the left voted against the suffrage when the truth is that the support of the PSOE was essential for the Campoamor amendment to prosper. "Another common place, one more topic, that has disfigured that debate that changed the history of Spanish women refers to the victory of the conservative parties and enemies of the Republic, especially the CEDA, in the general elections of 1933 as an effect of the female vote. Paradoxically, both Campoamor and Kent lost their seats, although the latter recovered it in the elections. 1936. Fortunately, however, numerous historical investigations show that the defeat of the left in 1933 was due to other factors, including its own fragmentation into various candidacies, the unity of the right in a bloc, or the abstention advocated by the CNT. "On the contrary," Lafuente alleges, "in 1936 the Popular Front won, so that it can be affirmed that the vote of women influenced both cases in the same way. than men's. "

Despite the fact that the rivalry between Campoamor and Kent was the cause of innumerable macho jokes ("There are only two deputies and they do not agree"), hurtful cartoons in the newspapers and endless domestic discussions, those two leaders behaved always with great respect for each other, an attitude that could be clearly observed in their speeches in Congress. They weren't friends or accomplices, but were united by their pioneering and avant-garde status in many respects and their struggle to make their way into a male-dominated political life. Based on this evidence, the playwright Olga Mínguez has written Victoria is coming to dinner, an award-winning theater piece that imagines that relationship in a timeless fictional setting and is performed at the Luchana theater in Madrid with the direction of Carmen Nieves and the interpretation of Tiffani Guarch and Rebeca Fer. "I believe", says the author, "that both are still today two great unknown when they were essential figures with impressive biographies beyond the issue of voting. The work focuses on the famous debate, but broadens the focus to review previous trajectories and later by Clara Campoamor and Victoria Kent. They were great pioneers, both among the first lawyers to practice in Spain, and both with many interesting facets, some of them controversial. "

Thus, the two characters face their weaknesses, from Kent's collaboration with the Primo de Rivera dictatorship to Campoamor's attempt to return to Spain during the Franco regime, while extolling his virtues in his struggle for the democracy and the Republic. Without falling into a Manichaeism of drawing a good and a bad deputy, Mínguez explains that he tried to understand the reasons for both. A history teacher at a high school in Elche, the writer agrees that those two leaders embodied the social division that existed among Republican women, both among the elites and among the common people. Both Lafuente and Mínguez claim the need to further study these two outstanding women whose exiles have condemned them to ostracism and oblivion. In the case of Campoamor, who died in the Swiss city of Lausanne in 1972, his figure was not widely recovered until the beginning of the 21st century as a result of the 75th anniversary of the granting of the vote to women. "A double silence weighed on Clara", says her biographer, "since she died before Franco and she also isolated herself and became quite detached from politics during her exile in Argentina and Switzerland. Regarding Victoria, who lived in Paris, Mexico and New York, and she continued fighting for the republican cause, she was only able to return to a democratic Spain on a couple of occasions. But she no longer settled in our country because she was an old woman who died in 1987. "