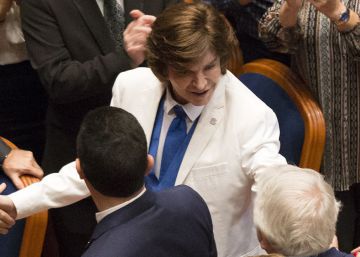 Camilo Blanes Cortés, known internationally as Camilo Sesto, he was born in Alcoi, a city of Alicante of fire and party, of bridges and mountains. Today, the town has risen with the news that its most international figure He had died at dawn. "Camilo, we love you," his fans cry. "We are dismayed, trying to assimilate the news," says Gilberto Molina, president of the singer's fan club, sorry. The municipality, which regained contact with him in 2016 after decades of distancing, has decreed two days of mourning. It was named after Alcoi in every corner of the world, ”said the mayor, Antonio Francés. "It's a very sad day."

Alcoi, where the singer was born 72 years ago, where the artist's parents are buried and where he keeps relatives, gave him three years ago the title of favorite son and the city's gold medal. In the tribute, held in an auditorium to burst, the municipal music band performed some of their successes while the artist sang the lyrics softly.

It was a "fair show of gratitude, a deserved tribute and a testimony to the collective history of the Alcoyans," recalled the mayor. Who doesn't know To live like this is to die of love, regardless of age or nationality? Camilo's ability to be universal, to disregard neither the years, the territories, nor the social differences made his work a unique testimony and the city that saw him being born was recognized in the twilight of his life.

Camilo Sesto, master of the melodic song, He has had an unusual career. “We talked about an artist with more than 175 million records sold, more than 50 numbers one on the music charts, gold records and Grammy. We have in front a singer with capital letters, which has crossed all borders. His international stature is unquestionable, the best Hispanic artist in history in many countries, capable of filling the Universal studios in Hollywood with the public, or making the best adaptation in another language ever made of Jesus Christ Superstar”, The politician said.

His countrymen remembered that Camilo Blanes lived his childhood in this municipality of Alicante, between the neighborhood of the Clots and the school of the Salesians. Who learned the first life lessons here, grew up and dreamed that one day it would be very important. In Alcoi he began to sing in the school choir, discovered painting, another of his hobbies and "had his first friends and first love, here, at home," recalled French. He also began to sing in groups such as the Dayson and Los Botines until he arrived in Madrid and projected his voice, his songs, to the world.

The artist, excited, with an audience that did not cease to compliment him, to chant his name between palms, returned their affection with an “I am an Alcoyano of pure strain since I was born. My heart is from Alcoi. Let the world know where I am from. ” Since then, Camilo Sesto regained the relationship with your city In 2017 he returned to the famous Moors and Christians festivities and in 2018 he returned when the municipality gave his name to one of its main avenues. Today, the mayor recalled, it is “a sad day for the city. We lose our most international artist, who has crossed borders. ” Tomorrow, Monday, a representation of the Consistory will be in the chapel of the singer, installed at the headquarters of the SGAE in Madrid. "We will wait to know what is the will of the family of Camilo, where he wanted to rest, and from there we will collaborate in everything we can," said French.

The artist's fan club is a few meters from Alcoyano City Hall and its president, Gilberto Molina, regrets his death and comments: “Next week we had an exhibition of paintings and a day truck driver on the occasion of his birthday [September 16] but we have suspended everything. ” His followers are very hurt: “We still don't believe it, although it was delicate. We will remember him as the affectionate and funny person he was, ”says Molina, who fell in love with Camilo Sesto's songs when he was a teenager, a long time ago.