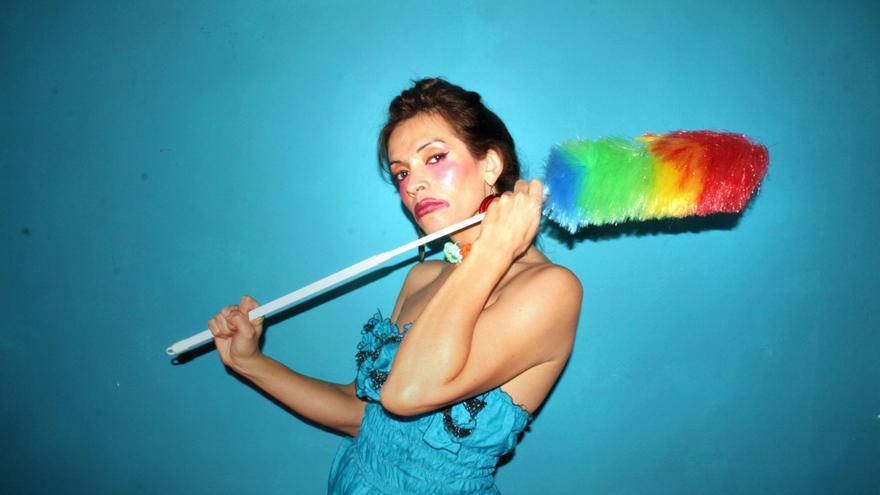 At the age of four, he wrote for the first time the name his father and mother gave him: Cristian Omar. At the age of five, Camila Sosa Villada (La Falda, Córdoba, Argentina, 1982) already knew how to read and write. He grew up in a humble town of 5,000 inhabitants where he was the only trans person. So, for Sosa Villada, writing and cross-dressing were an intimate act. When he was twelve he read ‘One Hundred Years of Solitude’. At thirteen she wrote a love story about her gym teacher and in this, for the first time, she self-baptized in feminine: Soledad.

“I did the homework for the big boys at school, I wrote them, added and subtracted, so that they would defend me if the others chased me and beat me. It worked very well for me, always [la escritura] It has been a safe conduct, “recalls Camila Sosa in a video call for elDiario.es.

He turned eighteen, left the town and moved to the capital Córdoba. In the Argentine city, she studied at the university – four years of Social Communication and four of Theater – in the morning, and at night she prostituted herself in the Sarmiento Park. “A great green lung, with a zoo and an amusement park (…) In front of the statue of Dante (…) the transvestites climb every night from that hell that nobody writes about, to return spring to the world” , describes Camila Sosa in ‘The evil ones‘ (Tusquets, 2020) the park where she worked as a prostitute until twelve years ago.

Camila Sosa has written a collection of poems –’La novia de Sando ‘ (Tusquets, 2015) -, the successful novel ‘Las malas’ –Award Sor Juana Inés de la Cruz 2020– and has just been published in Spain, by the hand of the transoceanic alliance between the publishers La uÑa RoTa and DocumentA / Escénicas, the autobiographical essay ‘The futile journey: trans / scriptures‘. It is a volume that continues to strengthen this great 39-year-old Argentine writer, who lives in a continent where the average lifespan of trans and transvestite people is between 35 and 41 years old, according to United Nations.

Literature has always accompanied the life of Sosa Villada, as has interpretation. In 2009 he premiered his first theatrical work, ‘Carnes tolendas, scenic portrait of a transvestite’, piece that witnessed his transition from the streets to the stage. Since then, Sosa combines writing with acting in film, television and theater. “Now I would be unable to specify the limits that differentiate a prostitute from an actress”, writes Sosa Villada in his latest essay. “What happens is that it is very difficult to accept that we are all being prostituted. We have to abolish a system that prostitutes us.”

Writing, “that useless and inexplicable job”, according to Camila Sosa, a vocation that seemed “a hobby” to her father and mother. Although it was he who taught her to write and she to read. “One day my parents took me to the edge of a forest. Before my eyes stood thousand-year-old trees. The peaks of the hills were hidden behind them as if they were afraid of being seen. My mother gently pushed me inside of the forest and I did not look back. In this forest I made my home, I chose my grave, I had loves and dreamed of my reincarnations “, describes the writer in ‘The useless journey’.

On the mother’s side, Camilla Sosa’s great-grandmother and great-grandfather were illiterate, they could not read or write. Her paternal grandmother wrote poems to the saints, “love poems”, in the eyes of her granddaughter. Life in Mina Clavero, the town in Argentina’s Córdoba where Sosa Villada grew up, was hard. “We were rural people, we were very poor, we all had to work: my mother, my father and I, we had to support the household economy between the three of us,” says Sosa.

The author recalls that once she fell ill and had to rest. His family had no money to buy books. Then her mother visited a neighbor known for her large library to lend her daughter books. This septuagenarian neighbor was called Elba Merlo de Fuentes. In addition to being a confidant, Elba Merlo was an important piece in Camila Sosa’s life as it fueled her literary drive. “It never occurred to Elba to question anything about me. She told me: ‘if things are bad in your house, here is the open door,'” she recalls with affection.

Shamanism and exorcism are some of the terms that Sosa Villada uses to refer to the ritual of writing. Act of rebellion and reflection where he meets spirits and ghosts, both lovers and ancestral. “It is my cultural heritage, I cannot get rid of it. Although I am a disbeliever in the Catholic Church, I am an apostate. It is my heritage, what I knew since I was a child,” says the Argentine writer. Sosa comes from a Catholic family. “I made communion, I was an altar boy, my childhood missionary,” he adds.

Writing as a method of psychoanalysis, this is what the author of ‘Las malas’ believes. A novel that draws on its own experiences, but also makes room for a magical fiction. The subject of the work are the links created between the transvestites who live and work around a park and what happens in it. The care of Aunt Encarna, the kindness of the headless man, the upbringing of El Brillo, are some of the experiences that build a crude story, full of love, precariousness and camaraderie. ‘Las malas’ is going for its third edition in Spain, in Argentina it sold seven in less than a year. At the moment, the book has been translated into German, French, Norwegian and Croatian.

Sosa feels that the enjoyment of writing is much greater than making love. Currently, the Cordovan author is correcting a book of poems that will come out at the end of the year. Camila Sosa tries to go to bed early, around 11, to be up early and go for a run around her city. The rest of her time is spent at home –confined–, correcting her next collection of poems alone. “I prepare a coffee, a tea, sometimes, if I am willing, I make myself a gin-tonic. So, smoking my joint, I keep correcting and think: this company is priceless, everything a woman like me can dream of. Being with herself at home making the world, I feel like God, “says Sosa.