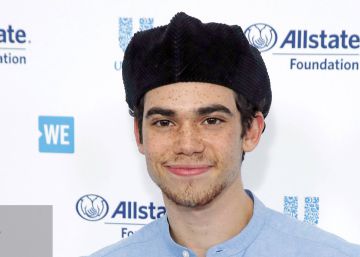 The star of children's television Cameron Boyce died after an attack of epilepsy, according to confirmed this Wednesday the family to several North American means. "Cameron's tragic death was due to a seizure as a result of illness, and that illness was epilepsy," the family said in a statement. Previously, the family had said that Boyce died "while he was sleeping because of a seizure due to a disease he was treating," but he had not mentioned what the disease was. The Los Angeles County coroner has not yet established the official cause of death.

Boyce, one of the faces most known of the Disney factory In the last decade, he died at his home in Los Angeles, at age 20, on July 6. His sudden death caused a strong impact on followers from around the world and in those who shared a screen with him, such as Adam Sandler, Zendaya, or choreographer Kenny Ortega, who flooded the social networks with messages of condolences.

The actor and dancer was found dead on Saturday afternoon at his home in North Hollywood, where he had moved with two fellow Disney actors. On Monday, the Los Angeles County coroner confirmed that he had undergone an autopsy, but did not definitively establish the cause of death. "Early on the afternoon of July 6, Cameron Mica Boyce (date of birth 5/28/99) was found unconscious at his home at 5100 Cartwright Avenue in North Hollywood. The authorities confirmed the death in the place at 14:35. Today an autopsy was performed and the cause of death has been postponed, pending further investigation, "says the forensic statement.

The Boyce family asked for privacy in the duel. "We are still trying to go through this extremely heartbreaking moment, and we continue asking for privacy so that the family and everyone who knew him and wanted to mourn his death and prepare the funeral, which is in itself distressing," the family said. the statement on Wednesday.

Cameron Boyce became famous for a generation of Disney Channel viewers playing Luke, the mischievous son of a couple of millionaires who lives with his caretaker in the series Jessie. The series lasted four seasons, between 2011 and 2015 and made children's stars to all its actors. Boyce acted next to Adam Sandler in Big kids and in its sequel. At Disney, he made three films of The descendants, the last of which was going to be released this August.

Has the ‘young adult’ died? | Babelia