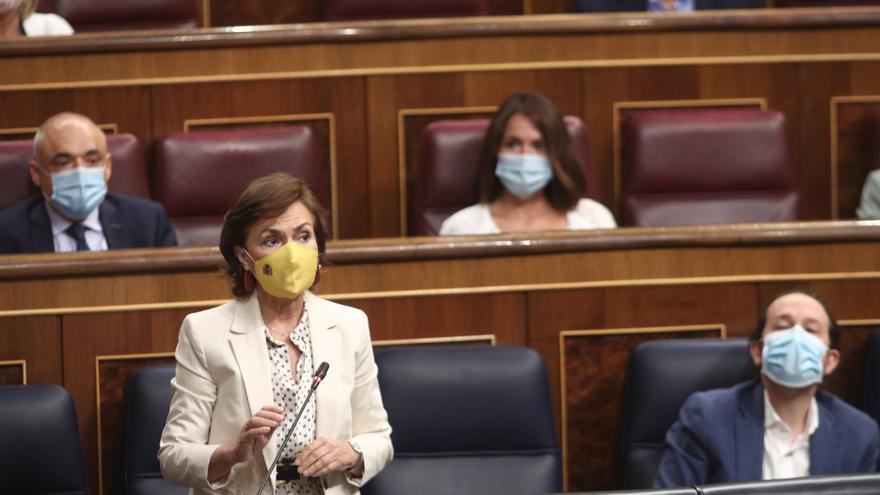 First the contents and then the allies. That is, in summary, the answer that the First Vice President of the Government, Carmen Calvo, has given to the pressure of his coalition partner Pablo Iglesias so that the public accounts are agreed with the allies of the investiture while the socialist part of the Executive maintains the door open to take them forward with the participation of Citizens. In a week in which contacts with the rest of the formations have multiplied and the second vice president counterprogrammed Calvo in his round with some parliamentary groups, the socialist leader has lamented that “there are too many people moving on the surfaces.” “Some walk in the previous debate of things and that is why I tell them first budgets, second the contents,” Calvo said in an interview in La Hora de TVE in which, however, he has not expressly cited Iglesias.

“This situation, which is exceptional, forces us to order the hierarchy of what is important. It is important to have budgets. The content is important,” said the vice president, who has placed third in the order of priorities “with whom” they agree those public accounts. “There are too many people moving on the surfaces and here the important thing is when the minister takes the step of placing the draft on top and then everyone has to pronounce on what are the social priorities of the budgets that we want them to be for this country outside even ideological definitions “.

The Minister of Finance, María Jesús Montero, and the Secretary of State for Social Rights, Nacho Álvarez, have already begun the internal negotiation of the budgets, the key project for the survival of the coalition. The main disagreement for now is the policy of alliances to move them forward. Pedro Sánchez keeps his hand out to all the formations and, specifically to Ciudadanos, which has taken a turn by opening up to negotiate and support public accounts. On the one hand, the president wants to try the maximum possible support and, on the other, in the retina of the socialists is the failure in the negotiation of the previous budgets, when the ERC decision to present an amendment to the totality sentenced the first term of Sánchez.

Calvo claims the weight of the PSOE when making decisions

In the midst of that discrepancy, Iglesias has redoubled the pressure with a round with the political groups that supported the investiture and that began this Wednesday with two meetings with the spokesmen of ERC and Bildu. Both formations have made clear their will to negotiate public accounts and that these should be a project endorsed by the forces that made Sánchez’s inauguration possible in line with what they defend from United We Can. Although the socialist part of the Government has avoided arguing with those meetings of the second vice president, Calvo has distinguished the round that she is carrying out as Minister of Relations with the Courts to address the legislative calendar and, among other issues, the budget project, and he has emphasized that it is the Minister of Finance who has to negotiate the fine print with the groups. The first vice president has already met with the PP, ERC, Grupo Plural and will do so this Thursday with Ciudadanos. It will only exclude Vox.

Faced with the crossed vetoes expressed by the rest of the formations, Calvo also wanted to send a message valuing the 120 seats that the PSOE has compared to the rest of the groups. “There is something that gives me a certain surprise. The ballot boxes have given us the proportions, that is literally sacred, what weight each one has. That must be respected and a lot: that is what the citizens have said that this weighs so much and this weigh so much, and I observe in a part of the political debate it does not matter almost everything is that it does not matter that, it matters more who has more weight in the media, with the noise, and who is holding an important weight of millions of votes behind him -ha affirmed-. And that is true democracy and that also has to weigh heavily on what we have to do not only from the point of view of public accounts but also from the point of view of the decisions we have to make. ”