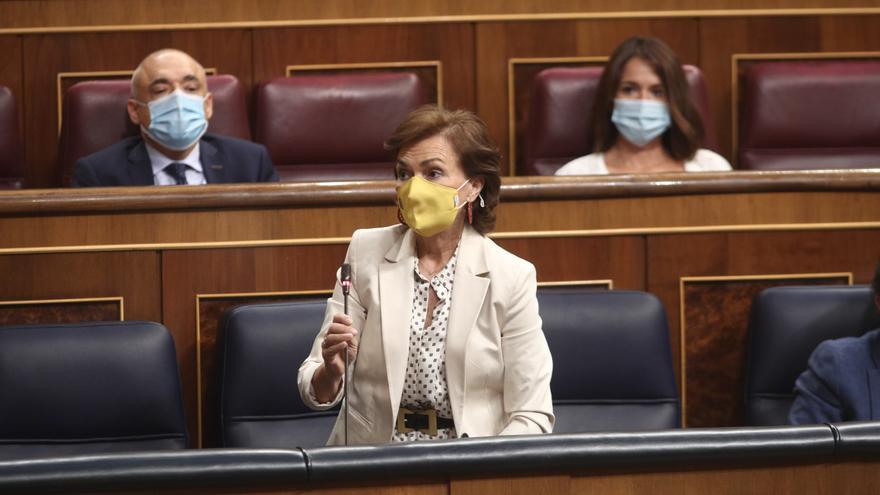 Nth attempt to reduce political tension. The first vice president, Carmen Calvo, today begins a round of talks with all the parliamentary groups, except with VOX, with the intention of redirecting the tense political climate with which the new session in the Congress of Deputies has started. “Citizens expect another type of behavior from us, without crossed vetoes or high-tension debates,” they say from the Government.

Calvo, who will start the round today with the spokesmen of the PSOE and United We Can, will meet next Monday with ERC and with those responsible for the groups that made the investiture of Sánchez possible, but plans to do so also with the PP and Ciudadanos. In reality, the only group that will be left out of the talks will be that of VOX, as its leader, Santiago Abascal, has refused since the pandemic began to answer the calls of the President of the Government, understanding that he has nothing to do. talk to Sánchez or his Cabinet, “the worst Executive in the last 80 years.”

The vice president will try to channel the legislative calendar and also pave the way for the negotiation of Budgets, after last Tuesday she announced after the Council of Ministers that she will reformulate the regulatory plan planned before the pandemic. Thus, the Government intends to bring 171 proposals to the Lower House before the end of 2020. Of these, three will be organic laws, 58 between bills and legislative reforms, and 119 decrees.

Calvo explained that it is a “transversal” plan that pursues the objectives of the coalition, such as the reorientation of the production model, social cohesion, ecological transition, digitization, job creation, progressive taxation -with taxes such as the Tax Google or that of financial transactions and also with a more demanding regulation against tax fraud-, the commitment to R + D + I, or equality -the commitment is that this semester the law for equality of LGTBI people, which generates conflicts between Government partners. In addition, the Government plans to promote in the remainder of the year the reform of the Penal Code to lower the penalties for sedition, which was one of Pedro Sánchez’s commitments when he tried to attract ERC for the investiture and which he has now resumed in full budget negotiation , and a law of Official Secrets, which is a historical vindication of the PNV. The vice president also made the commitment that the plan be published on the Transparency Portal in the coming days, which will make it possible to monitor the degree of compliance with it.

The round that Calvo will start facing the new political course also coincides with with the first parliamentary defeat of the Government Regarding the decree law with which it was intended to allow municipalities to invest a part of their surplus in exchange for transferring it to the State. The proposal of the Ministry of Finance had the rejection of all groups, and even socialist mayors reluctantly supported it. Despite last-minute changes agreed on Wednesday with United We Can to avoid the fracture in the vote of the Government partners – the common ones were in the no – the Executive will not obtain enough votes to validate the decree. The parties have accused the Government of a lack of dialogue and negotiation in this matter, which went ahead in the Spanish Federation of Municipalities and Provinces thanks to the support of the Socialist mayors, the casting vote of its president, Abel Caballero, and the abstention of the representative of United We Can.