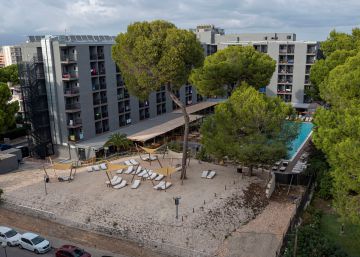 In the German tourism center of Playa de Palma you can feel the end of summer, with fewer and fewer visitors who continue walking in flip flops and swimsuits dragging huge beach mats. Thomas Cook's bankruptcy It has hit this tourist center in which 60% of the federated establishments in the employers had clients of the tour operator, who has left a hole of more than 10 million euros by not paying what he had contracted until bankruptcy and 2.5 million for the more than 8,000 travelers who will not arrive in the area in October.

The atmosphere that arrives outside from the Cook’s House Palma Beach is still typical of some sun and beach vacations, with clients leaving the establishment willing to take a dip and absorbed in their last days of vacation with the background music that sounds from some terraces. It is not possible to know how the fall of the travel giant is experienced from the inside because the secrecy of the employees is total and the security staff prevents access from anyone who is not a client.

On the other side of the phone Yolanda Tur explains that Thomas Cook's clients who have decided to travel with another area company continue to arrive at his establishment. She is the receptionist of the Casita Blanca apartments of Sant Antoni de Portmany in Ibiza, a complex that worked exclusively for the British company and that from one day to the next has seen how the business has collapsed. “We will keep the apartments running until October 3, which is when we were closing the season. What comes next we know nothing”States laconic. He acknowledges that they have had to charge customers for their stay in view of not receiving payments from Thomas Cook. “Some have evidently put problems because they had already paid the stay to the company. But we have had to charge it, we have no choice, ”he says.

The confusion also reigns among the workers of the Thomas Cook headquarters in Palma, which opened just a year ago. The Balearic Government has pledged to accelerate the procedures so that almost 700 employees can collect unemployment benefits before. “I cried yesterday, there are cries, anger, anger, disturbances and uncertainty. I have been there for a week but if I leave I have no right to unemployment and here there are people who have been three to thirty years old and who do not know if they are going to pay them a settlement or not. We don't know anything, ”lamented a young employee, who along with other colleagues was on Thursday pending the meetings that the unions held with representatives of the company.

“We are all worried, there are people with families, couples in which the two members are in the company and do not know how they are going to pay the rent. We have work and we have to come, but we are not going to see the money, ”said a foreign worker at the doors of Palma's headquarters. The rage was evident among the employees, who predict that they will not see the September payroll and do not have much hope of collecting the short-term unemployment.

In the hotel Sentido Cala Viñas de Magaluf there was no desire to speak this week. In this hotel located in the kingdom of British tourists, especially young people, employees admitted that many of the clients had gone after the news of bankruptcy and that some suppliers had warned them that they would not bring new supplies if they did not see the money in advance. Calviá and especially the tourist center of Cala Millor in Son Servera, in the north of the island, are the most affected. In the latter area, three hotels worked exclusively with the British company and have been forced to close their doors. The hotel federation of Mallorca figures in more than 100 million euros the debt that the tour operator has with the establishments of the islands only for the last three months. And the losses for the 25,000 passengers that the British tour operator had to bring only to Mallorca in the month of October are still not quantified.