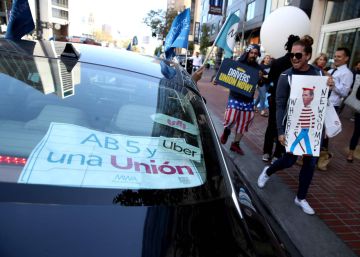 The first great political battle in the United States against the collaborative economy from Uber It has exploded this week in California with the provisional approval of a law that attacks the business model of these companies. The Californian Senate passed a bill on Tuesday night that considers the drivers of platforms like Uber and Lyft They are employees. The alarm has sounded in Silicon Valley and Uber threatens to take the matter to a referendum. This is the first major political confrontation of the big techs with the State.

Uber emerged exactly a decade ago in San Francisco. Since then, in the United States, anyone with a mobile phone and a car can request to register as a driver and start entering money without further ado. It is officially a independent contractor, according to the language of the company. Uber is the largest road passenger transport company in the world and has no fleet of cars or drivers, but partners to those who pay for a service. The driver is his own company, what sells within the Uber platform. The company has 3.9 million partners Drivers worldwide and 91 million regular customers.

The new law (called AB5 and proposed by Assemblywoman Lorena Gonzalez, of San Diego) attacks the heart of the Uber and Lyft business, its biggest competitor in the US market. The law is based on a ruling from the Supreme Court of California last year against a home delivery service and considered that the distributors are by default employed with exceptions.

The AB5 regulation makes this strict interpretation of labor legislation into law. In his explanatory statement, he states that the uberization of the economy, a phenomenon that California has exported to the world along with the iPhone, "has been an important factor in the erosion of the middle class and the increase in inequality."

The debate has confronted one of Silicon Valley's large companies with the State. In addition, it has led interest groups of all kinds to press to reduce the broad interpretation of the new regulations. The debate has focused on amendments of all types of industries trying to apply special rules. For example, him lobby California's publications made it possible on Tuesday to approve an amendment that exempts newspaper dealers.

Uber and Lyft have pressed throughout the summer in the Legislature without success. On the one hand, they have offered to pay a minimum wage of $ 21 an hour. On the other, they have threatened to launch a popular initiative to vote at the polls, which would not be difficult for them to achieve with the radical system of direct democracy in California. This possibility would be an important political problem. The final version of the law was approved this Wednesday by the California Assembly and sent to the governor for signature. The governor, Gavin Newsom, has publicly expressed his support, but on Tuesday night he told The Wall Street Journal which is negotiating with Uber and Lyft.

The battle against the collaborative economy in a state dominated without discussion by the Democrats also comes in full internal debate in the primary party, where union support is key to winning in some states. Several presidential candidates such as Kamala Harris (the local candidate), Elizabeth Warren, Bernie Sanders or Pete Buttigieg, who joined a demonstration of Uber drivers two weeks ago. The final approval of AB5 would be a boost to unions and labor rights by the state where Uber was invented. The affected industries have warned that the size and influence of California means that their decision in this area can end up being the standard throughout the United States and radically affect the model of these companies.