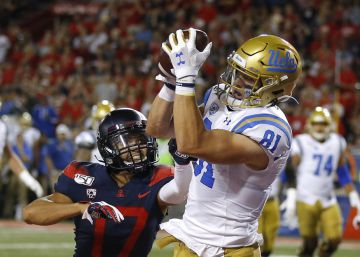 The rules of university sports in the United States have changed this Monday. The governor of California, Gavin Newsom, announced the approval of a law that will allow university athletes to charge for sponsorships. Currently, players participate completely free in exchange for their education in leagues that have huge commercial pull. The measure is the first of its kind in the country to involve a direct confrontation with the Association of University Sports of the United States (NCAA), whose business model is questioned and has threatened to leave California out of national competitions.

California law SB206 will not take effect until 2023, but critics have warned that its mere approval, signed on Monday, is already enough to completely alter the transfer market and balance in the university leagues. University competitions, especially basketball and football, are among the most followed sports in the United States on television. The players are strictly amateur, however. They are prohibited from charging and managing their own image. In some cases, they are players who live in poverty while holding the business.

The new law prohibits universities from putting restrictions on the commercial management that players can make of their own image. The rule includes some limits, such as accepting sponsorships that conflict with those of the university.

"This law rebalances power between athletes and institutions that had been perverted by money," Newsom said Monday in a call with the press. The idea is that NCAA sports are no longer amateurs, they are "a $ 14 billion business that leaves the NCAA 1 billion profit every year," Newsom explained. Athletes, who in college jargon are called athletes-students, not only do not see a dollar from that business, but also high-level training prevents them from participating in university life.

I’m so incredibly proud to share this moment with all of you. @gavinnewsom came to The Shop to do something that will change the lives for countless athletes who deserve it! @uninterrupted hosted the formal signing for SB 206 allowing college athletes to responsibly get paid. pic.twitter.com/NZQGg6PY9d

Only 2% of athletes, according to Newsom figures, become considered for professional leagues. “In the end, many have delivered their four years of college and are physically marked by experience. Some will never recover from the sacrifice. ”

Governor Newsom had already shown his support for the law last week on the television show of comedian Trevor Noah when he said: “This idea of ​​the student-athlete… come now. These guys are expected to sacrifice themselves full time for the sport, and when they run out, the following come and the cycle continues. In the end, it perpetuates a cycle of inequality. I am aware of the importance of this decision because the NCAA will change as we know it. ”

The first news of the signing of the SB206 law was given by Lebron James, the Los Angeles Lakers superstar. "I am incredibly proud to share this moment with all of you," James wrote on Twitter. The governor of California, Gavin Newsom “came today to The shop to do something that will change the lives of countless athletes who deserve it! ” The shop It's James's show on HBO and Newsom signed the law during the interview with James.

In the segment shared on the networks by James, the governor says that "this is a big problem for college sports." “California is going to cause dozens of states to pass similar legislation and will change university sports to better by putting the interests of the players at the same height as that of the institutions. We are rebalancing that power, ”says Newsom.

Minutes after the announcement, the league NCAA published a statement in which he said he was going to "study the next steps in California." The NCAA adds that its members "advance efforts to make adjustments" that are "realistic in a modern society." The statement complains of the "confusion" that this law will create, according to the league, and warns that "if other states plan their own legislation on this issue it is clear that an amalgam of different laws will make the goal of giving a fair and balanced pitch for 1,100 campuses and half a million athletes across the country. ”

Last summer, during the processing of the law, the president of the NCAA, Mark Emmert, sent a letter to the state Assembly in which he warned that the law "threatens to materially alter the principles of sports between universities" and that "It makes it impossible to host fair national competitions." In a public statement, the NCAA secretly threatened to veto California's universities in the competition for "an unfair advantage when signing." The measure would affect 24,000 state university athletes. Despite the warnings, the law was passed without votes against.

"We are not unaware of the consequences of this decision," Newsom said in the call with the press. In his opinion, the NCAA will not dare to veto California teams because "they cannot afford to lose a country-state."

It is not the first time that California, under the mandate of Newsom, decides to use the weight of its economy and its population to hit a national market and impose its own rules. This summer, given the attempt by the Donald Trump government to relax the pollutant emission limits of cars nationwide, California informed manufacturers that it maintained its own pollutant gas limits, much more restrictive than Trump wants. California's decision not to flinch before Trump placed car manufacturers in the face of the dilemma of accepting California pollution limits or facing a double market within the US, one for the country's largest market and one for the rest . Finally, four of the largest car manufacturers signed an agreement with California, which sparked Trump's fury.