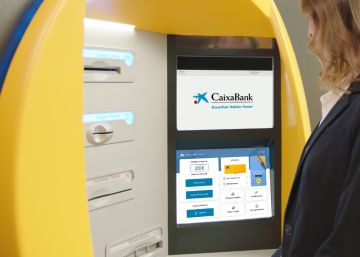 CaixaBank is once again betting on ATMs as a strategic part of its distribution channels. Now, the banking giant has taken advantage of the fact that it is in full integration of the Bankia network, after its absorption on March 26, to introduce a new modality in its terminals.

Thus, the deployment of a new technological platform for ATMs, ATMNow, has just begun, designed to completely transform “the user experience and incorporate new services and functionalities,” they explain from the financial institution.

The new platform has been created with the aim of offering ATMs the same operations and image as through CaixaBankNow, the online banking channel accessible by web and mobile. Although the technological characteristics of the devices are totally different, ATMNow implies a complete adaptation to the ATM environment of the user experience and quality of service of the entity’s digital banking.

Sources from the banking giant assure that the project “represents a technological milestone in innovation in digital services, since, thanks to it, the entity chaired by José Ignacio Goirigolzarri becomes the first fully omnichannel bank in the world, capable of offering the same experience of customer in all its digital channels ”.

The deployment of ATMNow has started with the installation of the platform in 50 ATMs located in key points of Barcelona. Over the next few days, the process will be extended to the rest of Spain, with the aim of completing the deployment by the end of July in more than 9,000 ATMs adapted to the CaixaBank network. Additionally, throughout the second half of the year, all ATMs from the Bankia network will be incorporated into the platform.

Services
In addition to homogenizing browsing styles and flows to unify the user experience with web and mobile channels, the new platform provides ATMs with different services and functionalities that had not been applied in other terminals up to now, facilitating a “more intuitive and fluid ”, explain the same sources. Among other innovations, for example, it improves the cash withdrawal process, which is reduced to just two steps.

It also highlights the incorporation of customization technology for the options menu so that each user has, on the first screen, direct access to their most common operations and options. This adaptation will be carried out by the default system, each time the customer starts using the ATM with his card and without the need for special settings. On the other hand, the ATM screens have been redesigned to be able to have more spaces to offer help information to the user.

CaixaBank’s complete omnichannel approach with ATMNow enables the creation of new services. Thus, it will be possible to have the preparation of operations through the app or on the web that they want to carry out later at the ATM automatically as soon as the user identifies himself. These new features are expected to be incorporated progressively.

In the process, the financial institution has had the opinion and participation of clients of different ages and profiles, as well as groups of bank employees. The deployment of this platform will be accompanied by a new wave of installations of facial recognition technology in ATMs, which facilitates withdrawals by reducing the physical contact of customers with the ATM surface, while reinforcing the security of use of terminals.

Facial recognition. CaixaBank has also promoted the installation of facial recognition technology in its ATMs. It already has 700 ATMs throughout Spain that have this service, of which the entity claims to have been a pioneer worldwide. The entity expects to reach 1,250 with biometric identification by the end of July 2021, so that all the new model CaixaBank branches in Spain, the store branches, will have at least one ATM with this functionality.

Facilities. With the new platform that it is implementing in its ATMs, a company will be able to leave its operations prepared on the web while it works, and when it goes to the ATM, just swiping the card will activate the operations it needs from the ATM without having to enter them. But the functionalities will increase in the coming months.